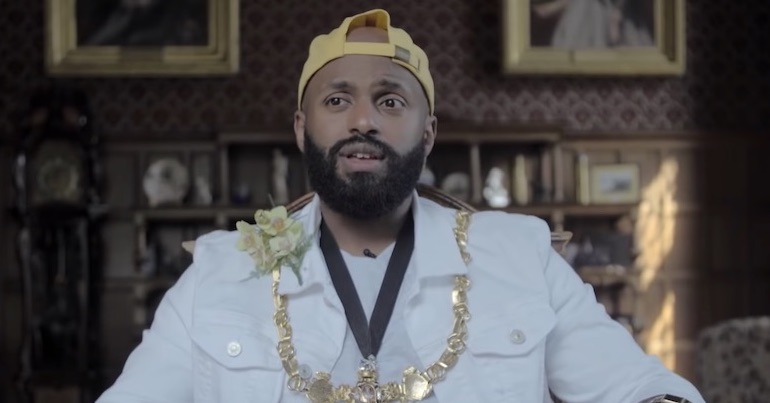 Remembrance Day in 2018 also marks 100 years since the end of the first World War. In truly powerful words, ‘Magic’ Magid Magid, the Lord Mayor of Sheffield, honoured all who died in past wars. But he also reminds us of the people dying in current conflicts and why we’re “in desperate need of an Anti-War Government”.

In 2016, 28-year-old Magid – a Green Party councillor – took office as the youngest ever Lord Mayor. His family fled war-torn Somalia when he was five. Ahead of Remembrance Day, he made a powerful statement on Facebook. He acknowledged everyone who “saw and survived the pain, misery and destruction of war in the first part of the 20th century”. He says “millions of innocent men, women and children slaughtered with disregard and disdain amid the brutality of war” quite rightly said “Never Again”.

But he also reminds us that when “politicians and powerful business” people sit “in comfortable chairs on comfier salaries in distant offices” to “impose war on the masses” they’re never the ones who “make the ultimate sacrifice”.

Fighting “the monstrosity of fascism” has one goal, he said: “the hope of lasting peace”. Yet he reminds us that there is no justice in most current global conflicts. And these are conflicts that our government is fully complicit in.

“The cries and desperate pleas of dying children”

As Magid says, there’s no justice “in the cries and desperate pleas of dying children and innocent civilians in Yemen, Palestine and elsewhere”. These are people:

killed by bombs with British labels launched by murderous regimes, whose despotic leaders are close friends, donors and business partners of some of our shameless political representatives.

Yemen has suffered a brutal civil war since 2015. According to the UN, it’s the “worst humanitarian crisis” in the world. Eight million people are on “the brink of famine”. The UN warned this may rise to over 12 million. Since 2015, the UK has licensed £4.6bn of arms to Saudi Arabia, the authoritarian regime leading coalition attacks.

Israel has met peaceful protests challenging Palestinian occupation with extreme violence. In April, a UN statement stated that Gaza is under “military occupation” and warned against Israel’s continued use of “excessive force”. Since 2000, Israeli armed forces or settlers have reportedly killed over 2,000 Palestinian children. Since 2013, the UK government has licensed £348m of arms to Israel.

“We must commit to global peace”

Magid makes a powerful call for the government to take vital steps to end all conflict. It must stop arming Saudi Arabia and Israel, to halt the “humanitarian catastrophe” in both Yemen and Palestine.

He also asks that the government help the UK’s military veterans so that they don’t need to “rely on charity”. The “concept of ‘Never Again’” he says, must inform “our foreign policy”. The UK must end its role in “bombings and military interventions” abroad. He also calls for it to “Scrap Trident” as it’s “a massive diversion from the path to global peace”.

As Magid says, we’re “in desperate need of an Anti-War Government”. So he calls on people to lobby and pressure MPs, to use our “votes and voices”:

to remove warmongers from office and elect a cohort of political leaders who are unshakably committed to peace.

War destroys lives.
We must commit to global peace.
We must resurrect and embody ‘Never Again’.

His powerful words truly do remind us of the truth about war, and why we must play our part in working for peace.

– Support CAAT and take action against the arms trade.

– Ask Theresa May and your MP to stop arms sales to Saudi Arabia and Israel.