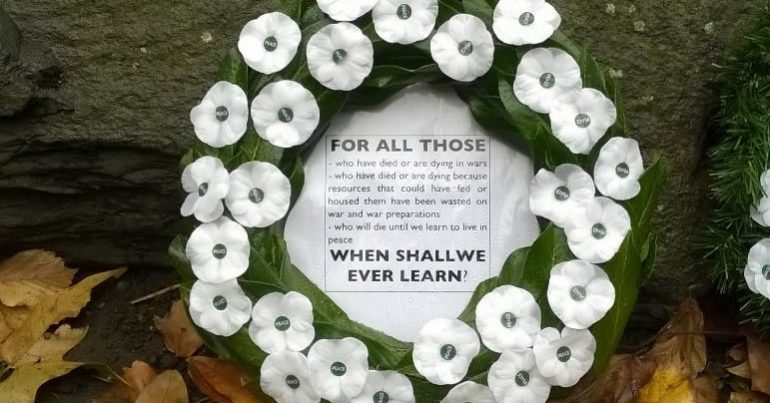 An Alternative Remembrance Sunday Ceremony took place at 1.00pm on 11 November in Tavistock Square, London. It was organised by the Peace Pledge Union (PPU) and ten other organisations that make up the First World War Peace Forum. The ceremony took place under the banner ‘No More War: Let’s make peace happen’.

White poppy wreaths will be laid throughout Britain this weekend to commemorate all victims of war of all nationalities.

Groups observed two minutes of silence at the ceremony. Peace and faith-based groups organised similar events in cities and towns across the UK. At 3.00pm, members of Veterans for Peace laid a wreath of white and red poppies at the Cenotaph. Around eleven organisations laid wreaths to remember the victims of all war.

Public figures including Piers Morgan and Conservative MP Johnny Mercer, have criticised white poppies. Despite this, the PPU sold over 120,000 white poppies this year. This is the highest figure since white poppies were introduced, in 1933. Since then, the white poppy been a reminder that war kills without discrimination. Those who wear them believe that the only way to end war is to focus on peace.

“The horrors of war”

The PPU criticised Theresa May and colleagues for laying wreaths to remember the war dead while continuing to sell weapons around the world. According to research by the Stockholm International Peace Research Institute, the UK government has the seventh highest military budget in the world. In a press release seen by The Canary, Symon Hill, PPU coordinator said:

100 years after the end of World War One, it is vital that we learn from its failure to be ‘the war to end wars’. War has been spectacularly failing to solve human problems for centuries. Remembering the horrors of war and commemorating its victims leads us to campaign for peace and to engage in nonviolent resistance to war and militarism. If we don’t learn from the past, we are condemned to repeat it.

Many UK veterans also rely on charity rather than receiving support from the same state that sent them to war. Around 13,000 veterans are homeless and most suffer from PTSD. Steve Heaney, an RAF veteran from North Wales who took part in the Alternative Remembrance Sunday Ceremony, said:

I have been dismayed and enraged in equal measure to see British politicians cry their crocodile tears of ‘never again’ at the Cenotaph. Tony Blair laid a wreath in 2002 while planning the invasion of Iraq. Cameron and May take their turn at the Cenotaph while veterans are disproportionately represented in prison populations, as homeless and suffering mental health issues. It’s shameful.