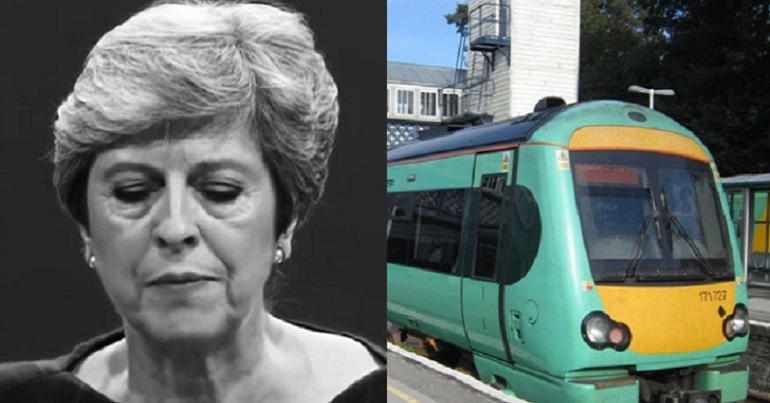 An A-level student has launched a petition over a controversial policy about our railways. The government may wish to take notice. Because the petition has already got so many signatures it will have to respond.

All aboard the petition express!

Ben Spiers is an A-level student. As the National Union of Rail, Maritime and Transport Workers (RMT) told The Canary, his law teacher asked his class to start a petition on something they feel strongly about. So Spiers chose the issue of driver-only operated (DOO) trains. And the petition, which you can sign here, is taking off. By 10am on Monday 12 November, Spiers had over 20,000 signatures. But the issue of DOO trains is such a contentious one it’s of little surprise so many people have signed it.

Trade unions like the RMT have been in an ongoing battle with train companies over DOO trains. The introduction of DOO trains would mean the scrapping of conductors across many routes. The RMT claims DOO trains put passenger safety at risk:

But Southern Rail, for example, says the trains will still have ‘on-board supervisors’.

The RMT, along with campaign groups Disabled People Against Cuts (DPAC), and the Association of British Commuters (ABC) have been warning about the risks of scrapping guards. For example, disabled passengers would have to book support 24 hours in advance to get on and off trains. The ABC claims this would breach the Equality Act 2010. But Southern Rail told The Canary that disabled passengers can still turn up without notice and expect support. It’s just that by booking in advance, the railway can give them additional assistance.

But Spiers isn’t buying what the train companies are saying. He told the ABC:

I don’t think companies should be profiting from exposing their passengers to danger.

Ben Spiers is an A Level student who just yesterday launched a parliamentary petition to #KeepTheGuardOnTheTrain. Here's what he told us.

Please support Ben and all young people who have concerns for safety and accessibility on unstaffed trains! Sign here https://t.co/uFKTdOxD9w pic.twitter.com/IDi8Xs9SFD

The petition is getting some high-profile support:

Over 19,000 signatures in 5 days shows the strength of public feeling to #keeptheguardonthetrain! Let’s make it 20k today! GUARDS on trains KEEP US SAFE, ASSIST THOSE WITH DISABILITY to travel & SAVE LIVES! Please sign the petition! LETS KEEP THE GUARD! https://t.co/cIxWKLQCMj pic.twitter.com/7VslT18Lqk

Please sign the Petition: Make it a legal requirement to have a second safety critical person on trains ????? #KeepTheGuardOnTheTrain https://t.co/3UF3WZZZa0

It even caught BBC News‘ attention. As it pointed out:

The number of signatures means Ben Spiers is now guaranteed a government response to his campaign.

In just six days, the #KeepTheGuardOnTheTrain petition has gained over 20,000 signatures. Congratulations to Ben Spiers – we look forward to joining him @10DowningStreet when it hits 100,000! Sign here: https://t.co/SC4K10HCHF pic.twitter.com/MDq1MWUibZ

And ultimately, Spiers and the RMT hope the petition will get 100,000 signatures. Because the government may then hold a debate on the issue:

Thank you to the 20,000+ people who have signed @spiers39920 petition, let's keep this going all the way to Parliament, here's to 100k #KeepTheGuardOnTheTrain; https://t.co/eEw4NOGOSf pic.twitter.com/RYs3WaAk6d

If Spiers’ petition reaches 100,000 signatures, it will put the government in an awkward position. Because while DOO trains are a decision private train operators take, public outcry and claims of legal breaches may force the government to act. So, if you haven’t – sign away. As at the very least it’s going to make the government squirm.