Today's attack on Jeremy Corbyn was nothing short of desperate - Canary 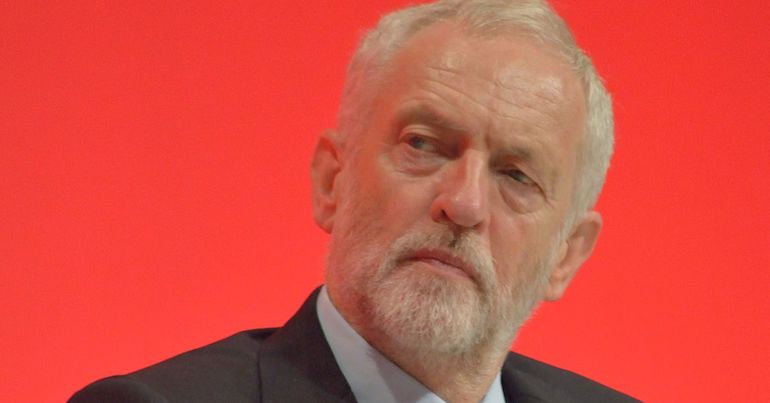 On Sunday 11 November, Labour leader Jeremy Corbyn laid a wreath at the Cenotaph to mark the 100 years since the end of World War One. But rather than seeing this as a mark of respect, the right-wing media went to town. This time, by criticising his coat and the size of his poppy.

As ever, the Mail led the way with a headline that claimed Corbyn looked “scruffy and disrespectful”. Its first headline claimed he looked “like a tramp”. Although this seems to have been changed, the Mail failed to edit the call for comments on the original headline:

Other outlets reported on his “small poppy”. And he got stick from LBC presenter Julia Hartley-Brewer for wearing – shock – a red tie.

But many on social media defended Corbyn against this desperate smear.

Some pointed out that more criticism should be levelled at Tony Blair:

Ahh, this again. After a ceremony about peace everyone’s talking about the size of the pin on Jeremy’s coat and not the warmonger above his shoulder who sent nearly 180 British soldiers to an early grave after the illegal invasion of Iraq. https://t.co/ZkvVO5Ok9t

Blair led the UK into the invasion of Iraq. That war killed hundreds of thousands of people, and the Chilcot inquiry concluded it was unnecessary. This is the same man that many think should be prosecuted as a war criminal.

Meanwhile, others suggested that before criticising Corbyn’s lack of “respect”, people should take a look at his voting record:

Corbyn: Voted against all of the above ?#ArmisticeDay100 pic.twitter.com/0H7cxQVUr5

I see they're out for Corbyn again – it's the wrong coat this time. You want to judge political leaders on respect they show for war? Fine. Check their voting record, not their clothing: this man shows more respect than anyone. #LestWeForget #ArmisticeDay100 #RemebranceDay2018

But some of the strongest voices of support for Corbyn came from veterans themselves:

Before you idiots start banging on about Jeremy Corbyn's coat. I'm a 79 year old ex Army, "War pensioner" And I don't give a flying toss what he wears. He is the only politician I know who would actively protect ex service personnel, unlike the Tories who create their problems!

And many others commented on the plight of veterans under this Conservative government:

Imagine watching remembrance ceremony & thinking the WW1 dead would want you to be outraged over the colour and style of Jeremy Corbyn's coat. I think they'd be more bothered that the people in charge cry crocodile tears as they leave 1000s of homeless veterans out in the cold.

Tories criticising Corbyn's coat when their party is killing ex-servicemen and -women through destitution, despair, homelessness and hunger is the sickest of sick jokes on this memorial day.

To all those who have criticised #Corbyn for the coat he wore today, let me just say that I hope you tweeted with as much self righteous indignation at the news of the death of Darren Greenfield.#RememberanceDay2018 #Corbyn #Cenotaph #Veterans pic.twitter.com/uN3p4ycCNc

Too many UK veterans rely on charity rather than receiving support from the same state that sent them to war. At least 13,000 veterans are also homeless, according to the Mirror, and most of these suffer from PTSD. And this is something that Corbyn also noted on Remembrance Day:

Let today spur us into action to give our veterans the support they deserve.

Labour's social contract for veterans will guarantee them the opportunity to have a home, to heal and to retrain when they complete their service.#ArmisticeDay100 https://t.co/iDHBbLL55l

The bottom line is that it’s November in England, and wearing a coat with a hood really isn’t disrespectful. Unlike the swathes of people who passed judgement on Corbyn’s actions:

Shocking revelation here. Jeremy Corbyn wore A COAT on a showery day in London today. I think Kev is a bit of a knob. https://t.co/fKzael4Iqg

But other suggested that perhaps there was a little more behind this latest media attack:

To understand the motivation behind why writers at the Sun, Daily Mail & Express are attacking Corbyn so bitterly over his coat, all you need to remember is Corbyn promised to clamp down on wholesale tax avoidance, including that by right wing billionaire newspaper owners

It’s unlikely that the relentless media attack on Corbyn will stop. But this latest ‘charge’ shows that right-wing outlets are getting more desperate by the day. Meanwhile, grassroots support for the Labour leader looks stronger than ever. A general election really can’t come soon enough.