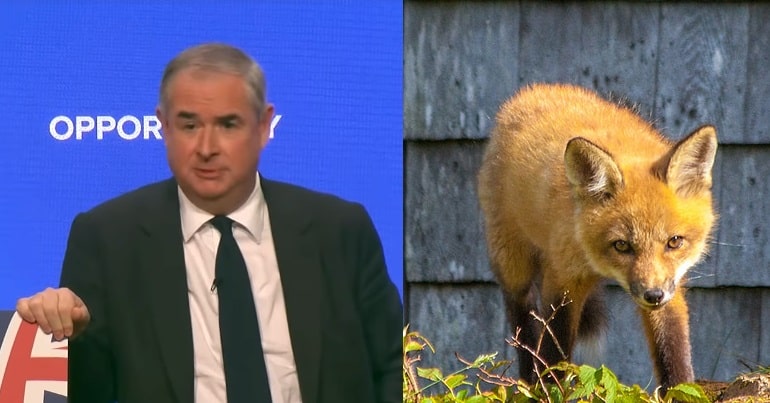 Make yourself at home

Theresa May’s top legal minister seemed to be accommodating hunters outside his house for refreshments:

If anybody is still unsure as to the reasons why the police, the CPS and the courts turn a blind eye to illegal hunting look at this picture.
This is the Attorney General Geoffrey Cox, he is a conservative MP and cabinet minister. Here we see him hosting the Lamerton Hunt HIT. pic.twitter.com/JhD8snmYS2

Cox and the Lamerton Hunt failed to respond to a request for comment from Devon Live.

Hunting wild mammals with dogs has been illegal since the Hunting Act came into force in 2005 – with the exception of rabbits, rats and, under some circumstances, hares. But hunts still take place under the cover of ‘trail hunting‘, which is a mock hunt using artificial trails.

‘Four foxes spotted in half an hour’

Yesterday we paid a long-overdue visit to the Lamerton Hunt, who were meeting at none other than the Attorney General’s house at Willestrew near Lamerton. If you’re wondering how the chief legal advisor to the government would have either the time or the inclination to host a hunt, you wouldn’t be alone! Perhaps Brexit is getting a bit much for him. We have sabbed the Lamerton here on a previous occasion, when Geoffrey Cox was a mere MP for Torridge and West Devon

No less than four foxes were spotted in the first half hour of the day, fleeing ahead of the hounds. Quick action from sabs to cover the foxes’ tracks and rate the odd hound that got onto the scent meant the pack failed to pick up on any of them. We find it quite implausible that so many foxes would all happen to reside in such a small area and so wouldn’t be at all surprised if at least some of them weren’t in fact resident foxes but were rather brought in to give hunt followers a good show.

On New Year’s Day, meanwhile, campaigners filmed the Kimblewick Hunt releasing a captive fox for hounds to chase down.

Labour MP Chris Williamson has called for action against the “routine disregard for law” that he says hunters display:

This routine disregard for the law by bloodsports fanatics must be addressed by the Police and politicians. Trail hunting is used as an alibi to ignore the Hunting Act.
Sadly, the Attorney General thought it acceptable to host a hunt over the festive period https://t.co/MP9h0P2Xlc

The cruel sport of hunting was made illegal for very good reasons. So it’s very worrying that the government’s legal chief appears to be hosting hunters on his own land.