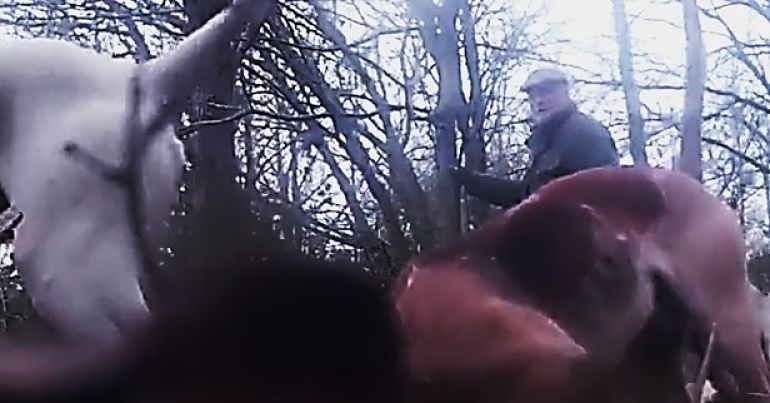 Footage has emerged showing men, allegedly from the Kimblewick Hunt, releasing a captive fox in order for hounds to chase and kill it. Such actions are illegal in the UK under the Hunting Act.

Anti-hunting campaigners say illegal activity such as this is commonplace. But hunts regularly protest their innocence, generally claiming that any kill is accidental or occurs within the confines of the law. This video proves just how untrue that can be. And if nothing else, the footage should serve as a massive blow to the rotten industry’s PR.

After receiving the footage, the Hunt Saboteurs Association (HSA) released it on 7 January:

Footage passed onto us shows members of the Kimblewick Hunt pull a fox out of an artificial earth and throw the terrified animal in front of the pack of hounds.

The group says it features members of the Kimblewick Hunt, which operates in Bedfordshire, Berkshire, Buckinghamshire, Hampshire, Hertfordshire, and Oxfordshire. The Kimblewick previously had to kill nearly 100 hounds after an outbreak of bovine TB. In particular, it names Mark Vincent as being present, who is identified as a local event coordinator in a hunt newsletter.

As the HSA explains, the video shows:

terrier men using draining rods to force the fox, that they’ve been holding captive, out of a drainage pipe then being thrown into the wood for hounds to chase.

Prior to the men dragging it out of the pipe, the man named as Vincent peers into it and flippantly says “peekaboo” to the terrified fox inside. This behaviour isn’t an anomaly either. As the HSA says:

In recent years the South Herefordshire, the Middleton, the Pytchley, the Belvoir and now the Kimblewick have all been implicated in keeping captive foxes to hunt, showing that this behaviour is commonplace amongst hunts.

The Countryside Alliance, which represents the hunts, provided a comment to The Canary on the incident. A spokesperson said:

All hunts should be operating within the law. There are exemptions to the Hunting Act, and other legal options, which can be used to cull foxes and most hunts still offer a fox control service. However unjustified the Hunting Act is it should be adhered to.

A spokesperson for the Masters of Foxhounds Association and Foundation (MFHA) also claimed, in a statement seen by The Canary, that it “has strict disciplinary procedures and will fully investigate any credible allegation relating to Masters, hunt employees or hunts”. The spokesperson added that it cannot take action that infringes on a police investigation.

Activists are calling for such an investigation into the incident.

With such clear evidence of wrongdoing, it’s difficult to imagine the hunt won’t face consequences. But the HSA doubts it will. Even with this “concrete proof of illegal hunting”, it expects the Masters of Foxhounds Association and Foundation (MFHA) to “do nothing”. The police, meanwhile, have regularly failed to prosecute hunts adequately for alleged criminality. The courts also rarely convict hunt members, in part because loopholes in the law make it difficult to do so.

That’s why authorities need to strengthen the law. As Labour MP Chris Williamson told the HSA:

Hunts up and down the country are routinely flouting the hunting ban. This arrogant disregard for the law of the land can only be stopped if the loopholes in the legislation are removed.

Williamson’s party has pledged to do exactly that. There are also efforts by the Green Party in Scotland, and a police commissioner in Cheshire, to do the same. But with a governing party that, far from abhorring the cruel practice, actually wants to scrap the Hunting Act entirely, it’s going to be an uphill battle. Indeed, as The Canary pointed out, rural affairs minister Lord Gardiner of Kimble is a former chairman of the Kimblewick’s previous incarnation.

Over 80% of the British public, however, are against the hunting of wildlife such as foxes. So if the Conservative government actually believes any of the rhetoric it keeps spouting about ‘the will of the people’, it needs to crack down on this anti-British criminality immediately. If it doesn’t, people should vote in someone who will at the next possible opportunity.