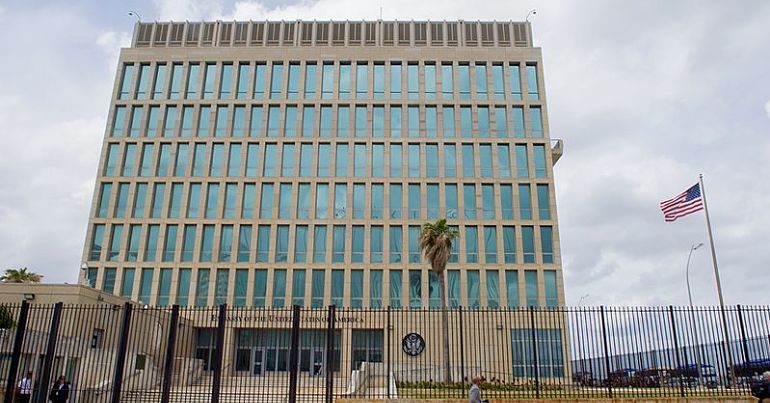 In late 2016, diplomats based in the US embassy in Havana began to report “concussion-like injuries” after hearing strange sounds suspected to be the result of “sonic attacks”. The cause of what is now known as the “Havana Syndrome” mystified US politicians for over two years; and it provoked a rupture in improving diplomatic relations between Washington and Cuba. But while the US media and political establishments quickly suspected Russia was to blame, the latest evidence points to something quite different.

A US official told NBC News in 2018 that the US had “no reason to believe this was anything but an intentional act”. NBC News continued:

The suspicion that Russia is likely behind the alleged attacks is backed up by evidence from communications intercepts, known in the spy world as signals intelligence, amassed during a lengthy and ongoing investigation involving the FBI, the CIA and other U.S. agencies. The officials declined to elaborate on the nature of the intelligence.

The US media then fell into line and entertained the idea that Russia was indeed the culprit with enthusiasm. The evidence for Russian responsibility, however, was far from conclusive and the intelligence used was unclear.

On 6 January 2019, after over two years of speculation, investigation, and indirect blame, scientists from the UK and US are now suggesting that the true source of the strange noise “matches the echoing call of a Caribbean cricket”. According to Fernando Montealegre-Zapata at the University of Lincoln:

The call of this Caribbean species is about 7 kHz, and is delivered at an unusually high rate, which gives humans the sensation of a continuous sharp trill… I am not surprised that this call could disturb people who are not familiar with insect sounds.

The latest evidence presents a potential diplomatic embarrassment for the US – and the media. But it seems unlikely that unfounded allegations against Russia will end anytime soon.

On 17 December 2018, the US media went into a frenzy after two reports alleged wide-scale Russian interference in the 2016 US election. The supposed interference ranged from the manipulation of the Green Party’s Jill Stein to the African-American population; from Instagram to Pokemon Go. The Washington Post argued that the reports were “the latest evidence that Russian agents sought to help Trump win the White House”.

As the Grayzone Project’s Dan Cohen reported, the evidence used to produce the reports was mostly from a “troll farm’s pages”, which “appeared after the election”. 25% of the troll farm’s pages, meanwhile, were seen by nobody at all. Moreover, “their minuscule online presence paled in comparison to the millions of dollars spent on social media by the two major presidential campaigns and their supporters to sway voters”.

Strikingly, the authors of one of the reports had previously “engaged in what they called a ‘Russian style’ online disinformation operation aimed to swing a hotly contested special senate election”. The report was therefore not only lacking in evidence, but also an apparent projection of the authors’ own election meddling.

The tendency to blame Russia and review the facts later was put on remarkable display in December 2017 in an interview between Guardian reporter Luke Harding (who had just published a book entitled Collusion: Secret Meetings, Dirty Money, and How Russia Helped Donald Trump Win) and Real News journalist Aaron Maté. After Maté probed Harding to provide evidence for Trump-Russia collusion for almost 30 minutes without success, Harding left the interview.

Harding is also one of the lead journalists trying to link WikiLeaks founder Julian Assange to the Kremlin, while providing little to no evidence to prove such a link. As The Canary has reported, the Guardian’s campaign against Assange – driven by journalists like Harding – is a lesson in how to lose journalistic integrity.

And the media campaigns against Russia and Assange mark a pattern of Western journalistic practice. As journalist Adam Johnson’s “North Korea Law of Journalism” theorises, “editorial standards are inversely proportional to a country’s [or person’s] enemy status”. As such, in the words of FAIR’s Alan Macleod, “stories about official enemies too good to be true are also too good not to publish”.

This article doesn’t seek to claim that Russia isn’t responsible for election interference; nor, for argument’s sake, that Russia isn’t weaponizing crickets against US embassy staff. It does argue, however, that journalists should rely on evidence to substantiate the claims they make.

Moreover, the reflexive instinct to blame Russia is – perhaps ironically – harmful to US democracy. Rather than looking inwards and assessing the most probable sources of popular discord with US politics, journalists are essentially closing their eyes to the processes that led to Donald Trump’s rise by outsourcing blame to Russia. And in doing so, they are enabling the rise of the right.