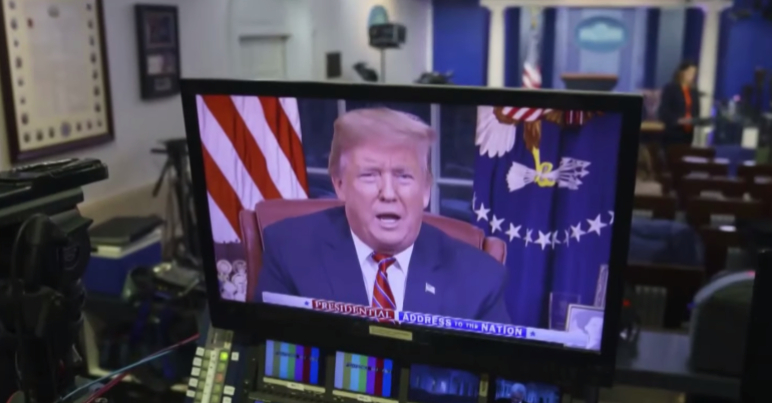 Late on 8 January, Trump gave a rare televised speech from the White House’s Oval Office. Addressing the nation directly, the primary purpose was to make the case for his proposed wall along the US border with Mexico.

The following day, social media users picked the speech apart. Because while some of his claims were misleading or significantly lacking in context and nuance, others were outright lies.

Perhaps the most preposterous, and easily debunked, of all of his lies was his claim that all previous US presidents have called for a border wall:

Trump: Past presidents said they wanted a border wall⁰
Every living past president: No, we didn’t. pic.twitter.com/nhuYrih4pj

Another brazen lie was Trump’s oft-repeated claim that a surge of undocumented migrants has led to a crime wave and undermined national security. As The Canary has previously reported, experts have roundly and decisively debunked this claim. In fact, there is considerable evidence that US-born citizens commit crime at higher rates than immigrants. NPR and the Daily Beast both pointed out this inconvenient fact:

Experts say President Trump's rhetoric overstates the threat posed by immigrants, who tend to commit crime at lower rates than people born in the U.S. — including violent crimes. https://t.co/RrrRNI1NCr

Fox News' Shep Smith fact-checks the #TrumpAddress: “Statistics show that there is less violent crime by the undocumented immigrant population than by the general population” https://t.co/o9PSnSHhPp

Trump also claimed that the blame for the government shutdown lies squarely with Democrats in Congress since they refuse to fund the border wall.

He has this exactly the wrong way round, though. Because as The Canary previously reported, in a meeting last year with senior congressional Democrats, Trump boasted that he would be “proud” to shut down the government over the issue. He even said explicitly that he would take the blame himself, insisting:

I will take the mantle. I will be the one to shut it down. I’m not going to blame you for it.

And as Reuters journalist Jonathan Landay pointed out, the public seem to be overwhelmingly pointing the blame at Trump as well:

This lie is compounded by the fact that the Democrats have actually been willing to compromise with Trump over the issue of border security. The Democratic leadership has offered his government $1.3bn in funding for enhanced border surveillance and “fortified fencing” along a portion of the frontier. As one independent journalist put it:

Trump knows Democrats are willing to compromise with him on a lot of his agenda — border patrol hiring, security equipment, etc. The one thing they won't yield on is the wall. Trump picked the one thing that's a nonstarter and said "I refuse to sign any CR until I get this."

Trump even tried to claim that immigrants take jobs from Black and Hispanic Americans. But several Twitter users saw this as just another cynical tool for dividing and scapegoating people:

Others called Trump out for evoking the concept of humanitarianism as if that was what motivated his desire for his border wall. Senator Kirsten Gillibrand said:

.@realDonaldTrump is deliberately misleading Americans and stoking fear. The only crisis at our southern border is the humanitarian one he has created. Any funding for a wall would divert needed resources from healthcare, education and job creation.

Now that Trump claimed in his speech he wants to address the humanitarian border disaster, Dems should call his bluff.

They should signal support for funding to address the humanitarian crisis, provided Trump reopens government and drops wall.

A new low? Or what we’ve come to expect?

The term ‘new low’ seems to have become so overused now that it risks becoming a cliché. Suffice to say, this latest speech was classic Trump: ignorant, dishonest, hateful, insolent, and blame-mongering. As The Canary has previously argued, the word fascist seems less and less of an overstatement as each day passes.