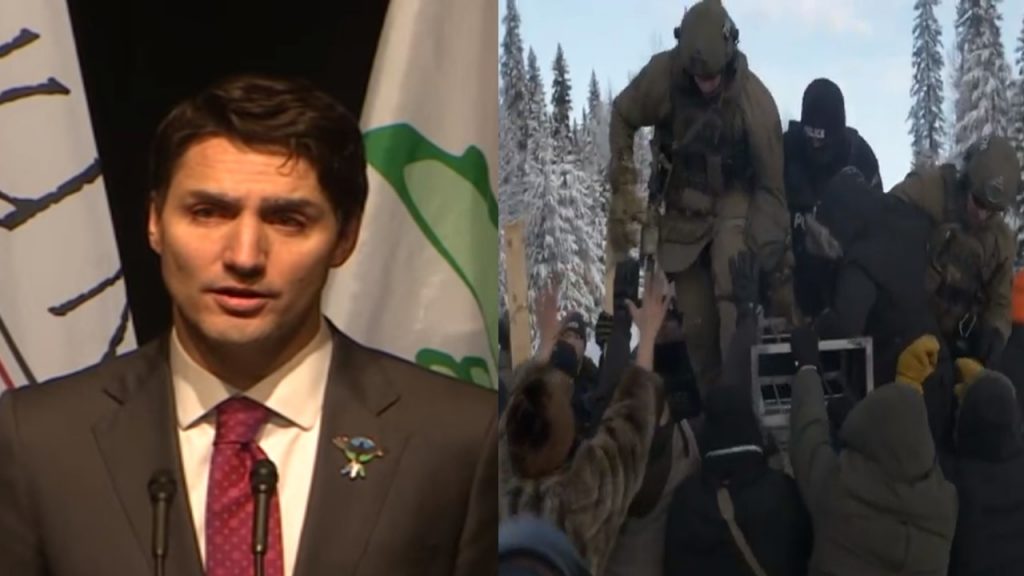 Through teary eyes, Canadian PM Justin Trudeau offered a “long, overdue apology” in November 2017 to Indigenous populations who had suffered at the hands of the Canadian state. “Saying that we are sorry today is not enough,” he continued, “it will not… undo the harm.”

But for as long as Trudeau continues Canada’s colonial legacy, his tears are worthless. And in the latest chapter of Trudeau’s subservience to corporate interests, Canadian state forces have invaded Indigenous land to defend a gas pipeline.

During what Canadian activist Naomi Klein described as “a shameful day for Canada”, the Royal Canadian Mounted Police (RCMP) raided protected Wet’suwet’en territory in the west of the country on 7 January. Those protecting the land’s boundaries captured the moment the RCMP – some heavily armed and wearing balaclavas – forcibly entered:

The moment RCMP came over the gates and started making arrests to enforce the Coastal GasLink injunction. pic.twitter.com/n6Cy1RLUu4

The Wet’suwet’en people have “unanimously opposed all pipeline proposals”. And they are resisting a court injunction ordering them to grant the Coastal GasLink project – operated by Canadian corporation TransCanada (which is currently considering a name change) – access to infrastructure within their territory. They claim the proposed pipeline is a threat to their rights, means of survival, and way of life.

Freda Huson, a spokesperson for one of the Wet’suwet’en clans, said:

I am here in my home, on my land… Without water, no human will survive and these projects like TransCanada’s Coastal Gaslink threatens the water.

For not the first time in Trudeau’s administration, Indigenous groups are claiming that the government did not adequately consult them about pipeline plans. Moreover, Article 10 of the UN Declaration on the Rights of Indigenous Peoples states that “Indigenous Peoples shall not be forcibly removed from their land or territories”. So the invasion of Wet’suwet’en land and the subsequent arrest of 14 people seems to be in clear violation of international law.

The RCMP’s mobilisation into First Nations territory is also symbolically important. Though people romantically refer to them as the ‘mounties’, the RCMP was central to the dispossession of Indigenous groups during the “Great March West” of the 1800s. According to historian Katherine Pettipas, they were “employed to assert Canada’s hegemony in the Western interior”.

The world is watching

Protests across Canada quickly spread into expressions of solidarity worldwide:

After the brutal raid by Canadian federal cops on #Wetsuweten land defenders stopping a fracked gas pipeline solidarity actions are under way in over 60 cities around the world.

Organize one! For more info go to https://t.co/i245EuUPNC#Wetsuwetenstrong #shutdowncanada pic.twitter.com/QeeAg8qFrZ

And the Wet’suwet’en people responded by saying that they are “humbled by the outpouring of solidarity”:

We are are humbled by the outpouring of solidarity and support for our Wet'suwet'en people. We expect RCMP tomorrow. We are still fundraising for our legal battle in the colonial courts. Please donate. #unistoten #Wetsuweten #nopipelines https://t.co/mSAWhsMw9I

Trudeau’s pandering to corporate interests threatens both Indigenous people and the environment. So we must look past his tears. Because the assault on Indigenous rights is unacceptable; and it exposes Trudeau for what he really is – just another corporate stooge.

Only sustained global pressure and solidarity can end this.