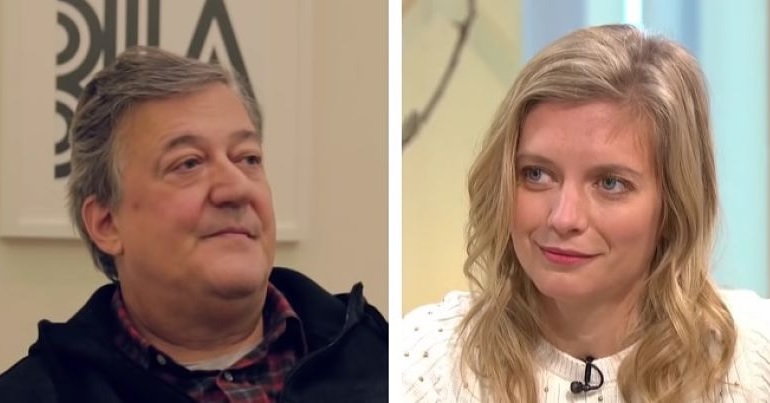 Stephen Fry expressed his support for Rachel Riley in the ongoing furore over her charges of antisemitism on 8 January. But, as the Countdown mathematician has branded the renowned and much respected Jewish intellectual Noam Chomsky a ‘promoter’ of antisemitism, Fry’s “I stand with you” message to her didn’t go down well with the public.

So, Fry attempted to defend his support in a further exchange with former MP George Galloway. But Riley probably won’t thank the well-known actor and presenter for this spot-on observation.

Riley’s regular discussion of antisemitism on Twitter stepped up a gear recently. She’s long accused Labour leader Jeremy Corbyn of being antisemitic. But she put out a list of antisemitism ‘promoters’ on 6 January which drew a lot of attention:

Some of the messages were replying to tweets I couldn’t see, as the tweeter had blocked me.

As far as I know, I’ve never had any dealings with this person, but their timeline shows support of those known to promote Antisemitism Loach, Bastani, Chomski. No surprise pro-Corbyn.

Amid the criticism and attacks on Riley that followed, a few high-profile figures came to her defence. Fry was one of them:

I stand with you, Rachel x

Galloway, however, pressed Fry on his support, specifically on whether he agreed with Riley’s characterisation of Chomsky:

Gosh, are those the only two choices?

Clearly, Fry wasn’t fully aware of what Riley did to attract such criticism. And once informed that she had insinuated that Chomsky was antisemitic – by calling him a ‘promoter’ of antisemitism – he distanced himself from that assertion. He did, though, offer some guidance on how to move forward from here:

Wasn't aware of any such assertion. Can't agree with her if she did say that, but "standing by" and "agreeing with every statement" aren't quite the same thing, are they? Let's all calm down and save our nastiness for those who deserve it. Can we perhaps agree with that?

But Fry’s advice puts Riley herself to shame.

Yes, do calm down

In his statement, Fry differentiated between “standing by” someone and “agreeing with every statement” they make. But in a further tweet about Chomsky’s antisemitism ‘promotion’, Riley showed that she’s not inclined to do this herself:

To all messaging outrage after recent thread re Antisemitism, not because of the AS I highlighted, but because I said one of their heroes (Chomsky) promoted Antisemitism.

Here he is, supporting a Holocaust denier.

If that doesn’t promote Antisemitism, I don’t know what does. pic.twitter.com/eS288Sgv00

As Riley points out, Chomsky supported the right of holocaust denier Robert Faurisson to have “safety and the free exercise of his legal rights” by signing a petition to that effect in 1979. He also penned a brief statement discussing the importance of civil liberties in relation to the situation. As Chomsky wrote:

Among people who have learned something from the 18th century (say, Voltaire) it is a truism, hardly deserving discussion, that the defense of the right of free expression is not restricted to ideas one approves of, and that it is precisely in the case of ideas found most offensive that these rights must be most vigorously defended.

In short, the academic defended Faurisson’s right to free speech. But that defence wasn’t an endorsement of the content of Faurisson’s speech:

Meanwhile, Chomsky extended the same right to free speech to those he considered war criminals, such as Henry Kissinger. But unlike Chomsky and Fry, Riley doesn’t appear able to grasp this distinction.

Nor does she seem able to “calm down” and save her “nastiness” for those who deserve it. Both Chomsky and Corbyn have spent their lives fighting against prejudice, hatred and violence. Yet it is these two exemplary individuals that Riley is attempting to tar with allegations of antisemitism.

So although many will surely agree with Fry’s call for calm and well-aimed criticism, it’s unlikely Riley herself will heed it.