A hunt allegedly killed two foxes in four days. Now calls for change are coming from the very top. - The Canary 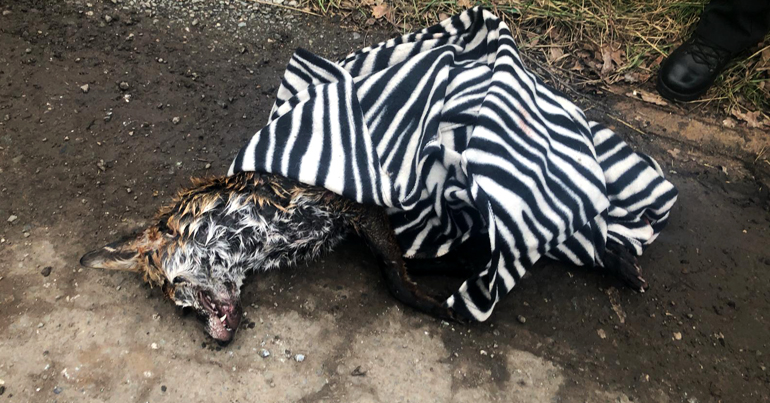 A hunt allegedly killed two foxes within days of each other. The incidents have caused a public outcry and once again raised concerns over the ban on hunting. And this time, even a police boss is calling for stronger laws.

Graphic images of a dead fox appeared on 5 January. Cheshire Hunt Saboteurs claimed the Cheshire Hunt was responsible for killing the animal.

The incident reached mainstream news including the BBC, Guardian and ITV. It prompted Chester MP Chris Matheson to call for jail time for the culprits and “[b]etter still an outright ban on fox hunting”. Cheshire Police later said it had launched an investigation into the incident.

But just days later, on 8 January, images of a second dead fox appeared on Cheshire Hunt Saboteurs’ Facebook page. The group claimed the Cheshire Hunt was once again responsible.

Laura Wyatt, a member of the public present at the 5 January incident, spoke to The Canary about what happened:

I can’t stop thinking about the fox that I saw, wrapped up in a blanket with her guts hanging out and her skull crushed. She’d been dumped in the canal by the Whipper-In – no use any longer and just disposed of – whilst commenting to one of the Cheshire Hunt Monitors, ‘Do you need a tissue?’ Callous and completely unfeeling, although unsurprising. … It was actually a terrifying experience – extremely intimidating and it seemed that the hunt supporters enjoyed winding up the sabs by shouting abuse and jeering…

There were two police officers present at the point of the kill, although the male officer I questioned denied seeing it happen. The police, although friendly in emotional circumstances, were unable to explain the process going forward after a fox had been killed. They were there to calm the situation, but there were no arrests made and the Hunt was allowed to continue on – surely the Hunt should have been stopped at this point?

In light of her experience, Wyatt went on to question the strength of the hunting ban:

What can we do to ensure that Cheshire Police finally prosecute? I believe that they have never prosecuted anyone for hunting, contrary to the Hunting Act, and have only ever passed one file to the Crown Prosecution Services. How is that even possible with all the evidence that has been passed to the police?

On 7 December 2018, The Canary reported on a statement made by Cheshire’s police and crime commissioner (PCC) David Keane that “current legislation… presents challenges to investigators and prosecutors”. As a result, Keane said he wanted to see “legislative change… progressed through parliament”.

The Canary contacted Keane’s office in light of the Cheshire Hunt’s two alleged kills. He said:

I am aware of the hunting related incidents which have taken place over recent days and have been contacted by a range of residents and their representatives expressing their concerns. The investigation of allegations related to any illegal activity, including those of illegal hunting, is the responsibility of the acting chief constable and the officers and staff under her command. The constabulary is aware of the allegations and in my role as police and crime commissioner in holding the chief constable to account, I will be seeking an overview of the investigation and any outcomes from those leading it. The acting chief constable is fully aware of my expectation that such incidents are thoroughly and robustly investigated.

The Canary also asked what the PCC’s commitment means in light of the kills on 5 and 8 January. The PCC responded:

Following the independent review I commissioned into illegal hunting in Cheshire, I will be holding a scrutiny meeting in public next month to discuss the outcomes of this review and the subsequent action plan to ensure Cheshire Constabulary is upholding its responsibilities under the Hunting Act 2004. I have also written to Cheshire MPs to highlight a need for legislative change. In the meantime, I would urge anyone who has evidence of any criminal activity relating to illegal hunting to contact Cheshire Police.

A spokesperson for the Cheshire Hunt denied allegations it was responsible for the death of the fox. They claimed the death occurred “solely due to the presence of anti-hunting protesters who were interfering with the hounds”.

But Cheshire Hunt Saboteurs ridiculed this. Speaking to The Canary, the group said:

The goal of the hunt is to rip a fox apart, we are very aware of how to use our tactics to prevent this. However, the huntsman will always have the upper hand in controlling the pack and we can’t always call off the hounds… We can only try to use calls to call them off… in no way do we cause the death of a fox with our tactics. The cause of the fox being ripped apart by foxhounds is of course the fox hunt who chase and kill foxes every week.

How many more deaths?

Less than two weeks into 2019, activists have already connected hunts to several illegal acts. On 7 January, the Hunt Saboteurs Association published video it said showed terrier men connected with the Kimblewick Hunt throwing a trapped fox to hounds. On 5 January, the Lamerton Hunt allegedly hunted illegally after meeting at the home of attorney general Geoffrey Cox. And anti-hunt protesters were subject to assaults from hunt supporters in Cornwall on New Year’s Day.

Activists have shown that hunts and their supporters consistently commit harmful, often illegal, acts. It’s clear the Hunting Act has done little if anything to stop hunts from continuing their barbaric activities. How many more deaths have to happen before this changes? Scotland is now taking steps to get rid of the loopholes in its hunting ban. The same must happen in England and Wales.