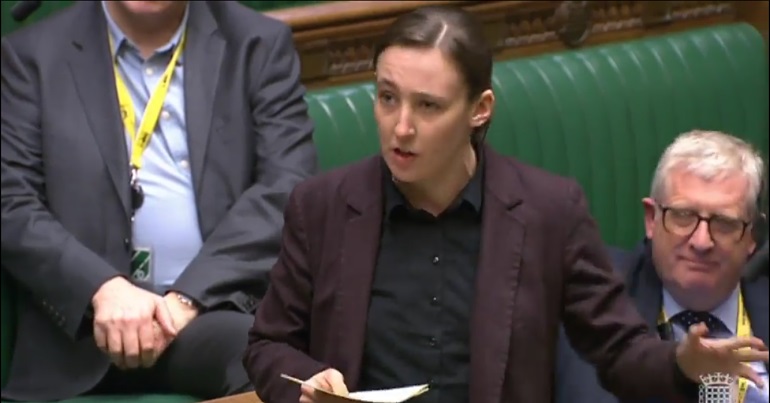 Speaking in the House of Commons on 10 January, SNP MP Mhairi Black tore the government a new one. The Paisley and Renfrewshire South MP didn’t hold back on Theresa May’s Brexit deal. Black also highlighted how poorly Scotland has been treated during the Brexit process:

“Cynical attempt to save her own skin”

Putting her views on Brexit as “bluntly and simply as possible”, Black opened her speech by criticising the prime minister for creating a false dichotomy. She pointed out that May’s “narrative” of “her deal or no deal is a piece of nonsense”. Going for the jugular, Black claimed that May has “deliberately manufactured things” to appear that only two choices exist. She also said May created this false choice in a “cynical attempt to save her own skin”.

Black went on to list alternative choices May could pursue including: extending Article 50, staying in the single market and customs union, or a People’s Vote. The SNP MP made it clear she would vote against May’s deal as it is an “appalling deal for [her] constituents”.

“We do not fear referendums”

Black stated the SNP respect results of referenda, after criticism from “all sides of the house”. She continued by saying the SNP doesn’t “fear” referendums, democracy, or allowing the Scottish electorate to vote on its visions “for a better Scotland”. Most noteworthy, the SNP is advocating for Scotland being an independent nation.

The SNP MP then claimed it is the “winners”, of both the Scottish 2014 and EU 2016 referendums, that are “terrified of being held to account for the promises that they made”. Black produced a government booklet sent to all Scottish homes prior to the 2014 Scottish independence referendum. In a comedic and sarcastic fashion, Black id there is a “stoater on every page”.

One by one, she poured scorn on the promises made to the Scottish electorate from the Tory and Lib Dem coalition in the to the vote. The HM government publication stated Scotland’s interests would be better served within the United Kingdom. But Black pointed out that since the 2014 vote, the promises of “all the advantages” of the pound, which is at an 18 month low, and the protection of pensions, which clearly doesn’t include the WASPI women, is a sham.

Black concluded that Scotland hasn’t been treated as an equal partner within the UK’s “family of nations”. Scotland voted overwhelmingly to remain in the EU. But as things stand, Scotland will be dragged out of the EU against its will.

But as Black says, Scotland might not be ‘sticking around’ much longer. The onus should be on the government, or indeed on any incoming government, to treat Scotland as an equal partner in this disUnited Kingdom – particularly in the context of Brexit.