Neoliberalism is dying, but events in Brazil show it's not going down without a fight - The Canary 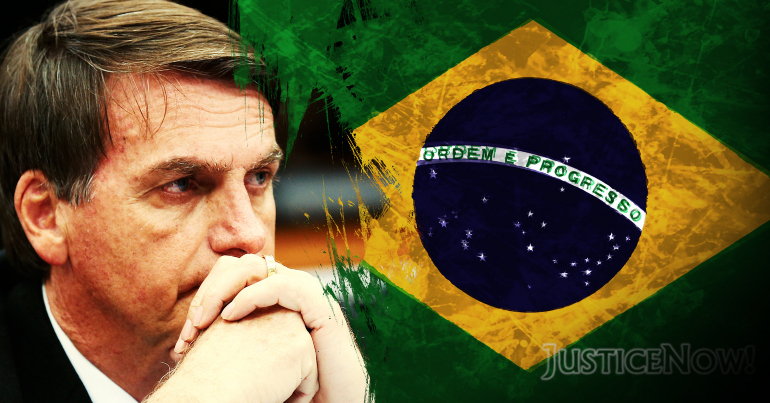 Neoliberalism – the economic doctrine that brought us austerity and privatization – has been discredited across the globe. It’s a dying creed. But it’s not yet dead. Because its rich and powerful supporters are refusing to go down without a fight. And the start of the new Brazilian president‘s time in office shows that it’s adapting to new circumstances, and even evolving into something more sinister.

The doctrine has contributed to falling wages, rising inequality, homelessness, and even hunger. And experts have exposed its ‘benefits’ as the empty ruse they always were. As Prof David Harvey argues in his powerful book A Brief History of Neoliberalism, it never aimed to serve the public interest; instead, its purpose was always to reassert the power of ruling elites around the world.

On 1 January, Brazil’s Jair Bolsonaro took office in Latin America’s most populous country and largest economy. And in under two weeks, he has demolished any lingering doubt that he’d govern from the far right.

Bolsonaro’s Trump-like brand of right-wing faux-populism doesn’t challenge neoliberalism. On the contrary, the Brazilian leader immediately filled his cabinet with some of the region’s leading acolytes of so-called ‘free market’ economics. These included economy minister Paulo Guedes, who was one of the notorious ‘Chicago boys’ (named for their training under neoliberal godfather Milton Freidman at the University of Chicago). These unelected plutocrats were responsible for the imposition of neoliberalism in Chile during the brutal Pinochet dictatorship, under which state forces
murdered and tortured thousands of political opponents.

And Bolsonaro’s government has wasted no time in following neoliberal dogma to the letter. One of its first orders of business was a fire sale of state-owned assets. On 8 January, the government announced that it will privatize or dissolve around 100 state-owned enterprises.

This follows plans to remove protections for rainforest areas and indigenous groups to make way for corporate expansion. The Canary has previously reported, this move threatens to worsen the environmental catastrophe of rainforest destruction and could even lead to a genocide against the country’s indigenous population.

The authoritarian side of neoliberalism

Most worryingly, Bolsonaro appears to be combining this boilerplate neoliberal program with outright authoritarianism – making his style more akin to Pinochet than Thatcher or Reagan. A New York Times op-ed condemned him for “putting nongovernmental organizations under government monitoring and purging government contractors who do not share his ideology.”

But this should come as no surprise. Because it’s not unusual for a dying ideological movement to double down and go into attack mode in order to sustain itself and reassert its dominance.

Bolsonaro and Trump’s brand of faux-populism actually feeds off neoliberalism’s own failures. As The Canary has previously argued on several occasions, these failures have created many genuine grievances that center and center-left parties (like the US Democratic Party and UK Labour Party) have failed to address.

Far-right forces, meanwhile, have happily filled the resulting vacuum by channeling discontent toward the scapegoating of ethnic and religious minorities, LGBTQI+ people, and immigrants – all while taking aim at so-called ‘liberal elites’, ‘liberal media’, ‘eurocrats’, and so on.

And Bolsonaro has already shown off both his anti-immigrant credentials and his contempt for international institutions. Because on 9 January, he withdrew Brazil from a UN migration accord.

It seems today that neoliberalism is entering a new authoritarian phase. As David Harvey wrote:

Liberal or neoliberal utopianism is doomed… to be frustrated by authoritarianism, or even outright fascism. The good freedoms are lost, the bad ones take over.

The conclusion is clear. The left needs to organize and provide a genuine alternative to a failed neoliberal dogma that’s going down fighting. If we don’t challenge it, ever more extreme forms will take root. The Bolsonaro government is proof of that. And there won’t just be an increasing rollback of concessions previously won from the ruling class by center-left governments. Even more fundamental triumphs of human progress, including democracy itself, will come under threat too.

We must stand up and be counted – before it’s too late.