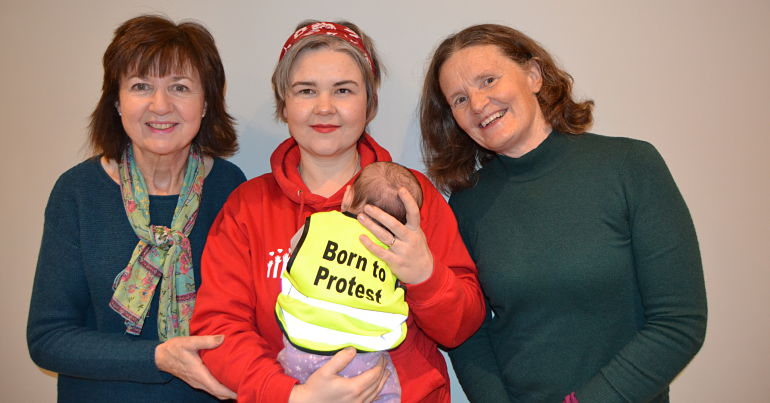 A relative peace has existed in the north of Ireland for 20 years since armed conflict ended. But a new conflict is brewing. And it’s an environmental conflict between an international gold mining giant and a rural community.

The communities of Greencastle, Gortin, and Rousky in the Sperrin Mountains of County Tyrone, aren’t easily accessible. You need local help to get there from the town of Omagh. Then, from there, it’s a 30-minute drive to the bóithrín (pronounced – ‘small road’ in Irish) that take you up the Sperrins.

The drive justifies its status as an Area of Outstanding Natural Beauty (AONB). But its beauty and environment are under severe threat as Dalradian Gold Ltd want to turn it into a “ camp”. Local campaigners are determined to ensure that never happens.

Dalradian applied for a full gold mining licence in November 2017. If successful, it will extract an estimated four million ounces of gold from the Sperrins for at least 20 years. It plans on using cyanide in the extraction process and storing it locally. Dalradian believes this is worth £3bn in gold deposits.

But cyanide leaks at the Baia Mare gold mine in Romania, and sanctions against Barrick Gold Corp in Argentina for cyanide means locals are fearful of Dalradian’s plans.

Locals have turned fear into action. And they’re directly opposing Dalradian’s plans. Key to this opposition are three people; Fidelma O’Kane, Michelle Dennehy, and Marella Fyffe. They spoke to The Canary about the action they’re taking to ensure the gold-mining plans never become reality.

The Owenkillew River is home to one of Ireland’s few examples of freshwater pearl mussel. And it’s a Special Area of Conservation (SAC). So when the Northern Ireland Environment Agency (NIEA), an agency within the Department of Agriculture, Environment and Rural Affairs (DAERA), granted Dalradian permission to discharge effluent into it, O’ Kane started legal action.

O’Kane told The Canary she’s taking a judicial review against the NIEA. Her case is currently ongoing. There’s a review on 18 January when she’s hopeful she’ll get a date for a full hearing. O’Kane’s been involved in the Save Our Sperrins group from its formation in June 2015.  She had never been a campaigner before, but got involved as she feels:

it has such serious implications for our country, especially the water, air, land and ultimately the health of the people.

After researching gold mining in different countries, O’Kane said she hasn’t “found one good news story about it”.

When Dalradian submitted a 10,000 page planning application, she read every word. She then spoke at public meetings to inform others and to encourage them to write letters of objection.

In response to Dalradian’s plan, Dennehy set up the Love Tyrone Facebook page. The page is run by writers, songwriters, and photographers. They use their work to:

draw attention to the beauty of the Sperrins and to the dangers posed by the proposed mine camp.

Dennehy told The Canary she wanted to respond positively to Dalradian. She feels this is important, as the size of what Dalradian is proposing is frightening. The Love Tyrone page offers “a burst of moral support”, she says. She also believes the campaign has brought people closer together, and that strong friendships are developing.

Her main worries about the mine are health related. Dennehy moved to the Sperrins to “offer our children a peaceful and safe childhood”. Her kids played on the road where the gold mine is to go which was the “idyllic setting for their childhoods”.

Fyffe told The Canary she knew nothing about mining before July 2018. Then, a friend who flies a microlight noticed mining activity in the area. She became concerned and set up the Cooperate Against Mining in Omagh (CAMIO) Facebook page. The people who run the page “believe that Nature has a long term value that should not be sacrificed to thinking”.

Since then, Fyffe has hosted public meetings at her yoga studio, and later in Omagh as the numbers grew. They raised awareness, gave out flyers on mining, and encouraged around 8,000 people to lodge objection letters on the local planning portal.

Fyffe then resigned from her weekly yoga column at a newspaper selling space to Dalradian. As her involvement in the campaign grew, she experienced harassment. People told her she supported violence simply by her association with other anti-mining groups. She lost clients at her yoga studio. She says she doesn’t know where it will end, but she won’t be happy until “the various mining outfits have left Northern Ireland”.

Fyffe also talks about the positivity and irony of meeting people she would never have met before. She sees it as ironic, as Dalradian has become an “unconscious [recruiter] to a new social and community paradigm”.

These campaigners are heartened by the outcome of a court appeal decision against a local incinerator – an appeal which could stop civil servants making large-scale planning decisions without a government minister. Northern Ireland has been without a government since January 2017.

Dalradian doesn’t realise the Sperrins isn’t a “mine camp”. Nor is it just an AONB. It’s a community. And while the community fear Dalradian’s plans, they love their community. And they’ll do everything to protect it.

Featured Image from Save Our Sperrins action group