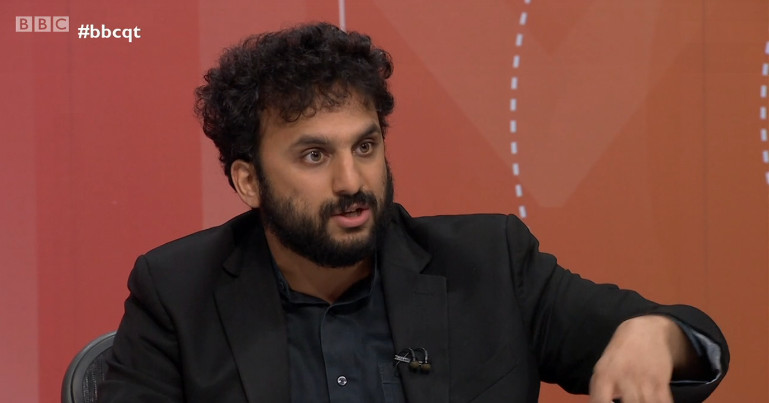 The first Question Time of the new year got off to a fiery start. In a heated discussion on London’s battle with knife crime, comedian Nish Kumar called out another panelist for supporting a “racist policy”.

Support for stop and search

for The Times, Melanie Phillips, also appeared on the show alongside Kumar. And during the debate on knife crime, she had some controversial things to say.

Phillips claimed that reduction in the use of stop of search by the police has led to “ black men [getting] murdered”. She also alleged that police were unwilling to get involved in issues related to knife crime for fear of being viewed as racist. She suggested this was due to the Macpherson report‘s conclusions that the Metropolitan police were institutionally racist. The report was released after an inquiry into the handling of the murder of Stephen Lawrence.

These comments were not well received by Kumar. He branded them ‘disgusting’, and said:

He went on to highlight alternative ways of tackling knife crime:

Now, the one thing I want to talk about is Karyn McCluskey in Glasgow and the systems that they put in place. Having spent time in Boston and looked at how that city worked to reduce its gang and weapon based violence, she had a kind of three pronged approach. A zero tolerance police policy. But also, and crucially, there was a focus on creating economic opportunity within these communities. They want to talk with charities that work , sort of, put victims in touch with people who are involved in gang violence, to kind of build empathy within the ties.

And then he slammed the policies he believes have fed increases in knife crime in London and elsewhere:

But ultimately this is all about economics. You have to provide opportunity, funding and resources for young people, right. to police numbers… We’re talking about a £736 million cut between 2010 and 2017 on youth services across the United Kingdom. How do you think that is not going to have an impact?

And it’s disgusting that you two would sit, politicise the issue, and sit in defence of a racist policy.

You can watch Kumar’s contribution in full here:

The reality of stop and search

Police use of stop and search is highly controversial with a police force that even senior police officers admit is still ‘institutionally racist’. Black people are eight times more likely to be stopped and searched than white people.

In 2018, new research found that there is “limited evidence of the effectiveness of stop and search in reducing crime”. Further still, it explicitly found that the policy does not reduce knife crime.

The evidence against stop and search is pretty damning. Thankfully, Nish Kumar reminded Melanie Phillips of this reality.