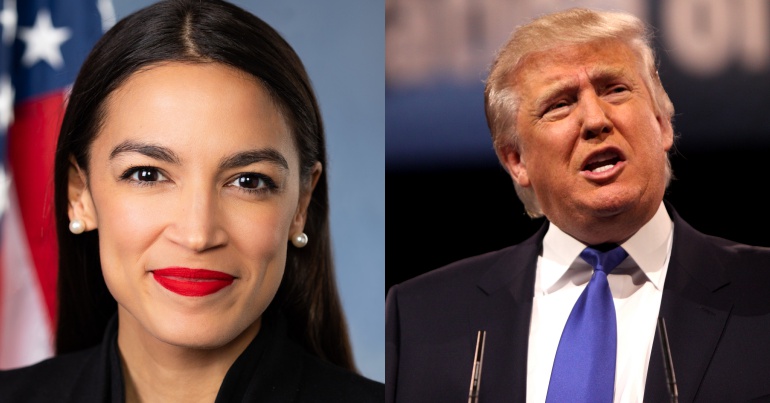 When asked why she didn’t speak about Trump much, Ocasio-Cortez replied:

Because I think he’s a symptom of a problem… The President certainly didn’t invent racism. But he’s certainly given a voice to it and expanded it and created a platform for those things.

When asked directly if she believed Trump “is a racist” she replied, without a moment’s hesitation: “Yeah. Yeah. No question.”

And she was able to fully back up her claim. She referred to Trump’s words, which rely on the “historic dog whistles of white supremacy”. She also pointed to Trump’s appalling response to right-wing violence in Charlottesville in 2017. After violent far-right marches, a white supremacist killed 32-year-old Heather Heyer. And she commented on Trump’s continual ‘manufacturing’ of “crises” about immigrants and refugees.

.@AOC says the president is a racist, “no question.” The White House told 60 Minutes that President Trump “has repeatedly condemned racism and bigotry in all forms.” https://t.co/HmucF1z6zg pic.twitter.com/N5RlRfHoA9

Later, she added more detail to her accusations. And it only took one tweet to shame Trump and his entire administration. Because facts are facts:

The President defended Neo-Nazis who murdered a woman in Charlottesville.

The Dept of Justice sued him for not renting to Black tenants.

He launched his campaign by calling Mexicans “rapists.”

The President is racist. And that should make you uncomfortable. https://t.co/RapKlDB99K

For many people, Ocasio-Cortez’s comments needed no further evidence. Trump’s ongoing racist rhetoric has been widely documented since he took office.

But shortly after the 60 Minutes interview, the White House press office responded and claimed that Ocasio-Cortez’s:

Seriously. She’s ignorant about racism? Perhaps the White House missed the memo that she’s Hispanic? Something that many people were quick to point out on social media:

Can we pause and marinate on the fact that the official white house response is that a woman of color has “sheer ignorance on the matter” of racism? https://t.co/1LPWHS8iNo

Since she was elected, Ocasio-Cortez has faced continued and sustained attacks for her outspokenness and radically principled stances. Most criticisms have focused on her age, gender and ethnicity. Yet she’s dealt with this with honesty, transparency and above all else professional composure:

For those out of the loop, Republicans began to circulate a fake nude photo of me. The @DailyCaller reposted it (!) and refused to indicate it was fake in the title as well.

No wonder they defended Kavanaugh so fiercely.

The White House also stated that Trump has “repeatedly condemned racism and bigotry in all forms”.

But few people seem to believe that. Because as the Washington Post reported, nearly “6 in 10 Americans agree with Ocasio-Cortez’s opinion that the president is a racist”. It continued:

The president “repeatedly condemning” racism, as the White House claims, is pointless when one of the main promoters of that bigotry is perceived to be Trump himself.

Ocasio-Cortez’s criticism of Trump comes as he has been widely criticised for a speech defending building a wall along the US border with Mexico. He used this speech to share more racist lies. And it seems this racism is hereditary. Because his son Donald Trump Jr also waded in, saying on Instagram: “You know why you can enjoy a day at the zoo? Because walls work.”

Such language is very dangerous. Because as The Canary reported in July 2018, a report evidenced a sharp rise in hate crimes during Trump’s presidency. These included racist attacks. For example, hate crimes in California rose 17%. Those directed against Latinos, meanwhile, increased by a staggering 52%. The figures indicated a year-on-year surge in hate crimes in the state since Trump came into office. These figures were also shocking when compared to previous years, where hate crimes had been declining.

By standing up to such vile racism, Ocasio-Cortez has shown yet again what a truly incredible woman and politician she is. And she couldn’t have come into the limelight at a better time.