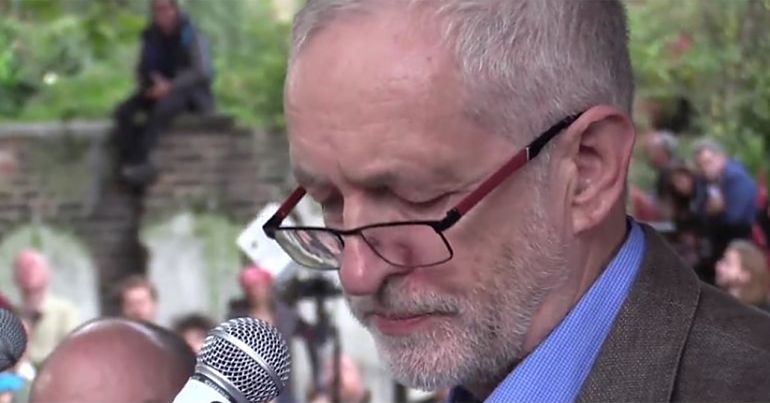 A two-minute-long clip of Jeremy Corbyn from 2016 has resurfaced. But his critics won’t welcome its revival. Because it turns their argument that the Labour leader is an ‘antisemitic racist’ on its head.

2016 marked the 80th anniversary of the Battle of Cable Street. In 1936, Oswald Mosley’s fascists attempted to march through the street, protected by the police. Residents of all backgrounds, ethnicities and religions united to block them. They successfully stopped the march.

Corbyn attended the celebrations for the anniversary. And a clip from the speech he gave at the event is doing the rounds again:

Listen to this and then consider what he's been accused of and how much that must hurt. Now as before some people are trying to break him as a man and force him to give up. #NoPasaran #JC4PM https://t.co/JzpESpvvuA

In his speech, Corbyn said the battle has “personal significance” to him because his mother took part in it. As the Labour leader explained :

She stood here, along with so many others. She wanted to live in a world, as we all do, that’s free from xenophobia and free from hate.

The Battle of Cable Street happened in October. So people aren’t sharing the old video now because it’s another anniversary. They’re doing so because the Labour leader is currently under attack.

His party’s national executive committee (NEC) recently approved a definition of antisemitism to use in disciplinary procedures. But it chose not to include all of the International Holocaust Remembrance Alliance’s (IHRA) definition wording. Most controversially, the NEC’s definition does not list “claiming that the existence of a State of Israel is a racist endeavour” as an example of antisemitism.

Since then, Corbyn has faced criticism from those who disagree, including people within his own party. Margaret Hodge allegedly called him a “fucking antisemite racist”. Meanwhile, a number of Labour MPs have engineered a vote in September to pressure the NEC into adopting the full IHRA definition.

The recently resurfaced video, however, provides a window into why Corbyn didn’t support including that particular example in Labour’s definition. In the 2016 celebration, he said:

Those who daub a synagogue with antisemitic graffiti, defile a mosque with Islamophobic hate, or any other community that suffers that abuse or racism, we are on their side to defend all those communities and the kind of multicultural society we want to live in.

Corbyn expresses solidarity with all people who are suffering through racism and hate from others. He’s non-discriminatory in his unity with these communities. The Palestinians, who face racism and hate from the Israeli government every single day, are certainly included in this.

The NEC left out the IHRA’s example regarding Israel because it fears it would stifle criticism of the country’s racist policies towards the Palestinians. 36 Jewish groups from around the world have also said that the IHRA definition “intentionally” equates “legitimate criticisms of Israel… with antisemitism”.

So Corbyn’s – and the NEC’s – caution over using the IHRA’s full definition text arguably signifies their unwillingness to sacrifice support for the Palestinian community in order to abide by it.

Corbyn ended his speech calling for a world “where there is unity and peace, not racism, xenophobia, poverty and division”. He also said:

We will not be divided. Our solidarity is total. Our unity is complete.

That unity, however, is not currently evident in his party on the issue of Labour’s antisemitism code. In fact, it wasn’t there in 2016 either. As author Alex Nunns has pointed out, that year Hodge was at the centre of the coup against the current Labour leader:

Unity is necessary, however; within the Labour Party and without. We must work together to achieve a world without antisemitism. But it must also be a world without Islamophobia and racism in all its forms.

As Martin Luther King said, “injustice anywhere is a threat to justice everywhere”. The same is true of racism. That’s why ‘total solidarity’ is the only way forward.