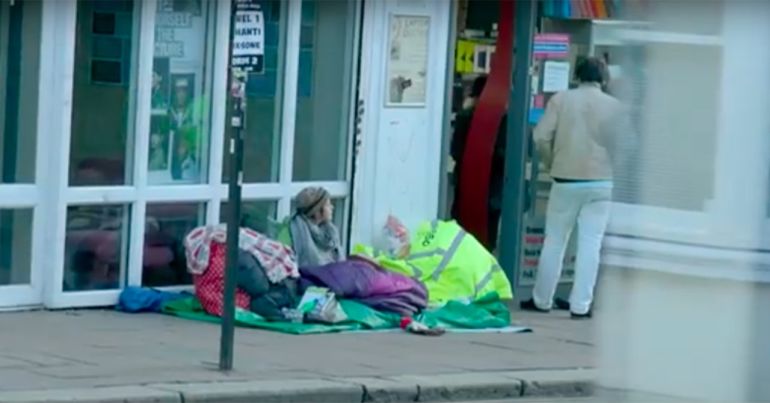 A doctor has claimed that government austerity is killing homeless people. The homeless death toll has soared in 2018, with the Brighton GP blaming cuts to social housing and mental health services.

Last year in England, more than 4,700 people slept rough on any one night… The number of people sleeping rough has risen by 169% since 2010

Dr Tim Worthley leads Arch Healthcare, a surgery that offers a “full range of medical services to patients who are homeless or in temporary accommodation”.

In an interview with the Mirror, Worthley slams Tory austerity policies such as cuts in mental health care, housing, and substance abuse services.

Expanding on this claim, he criticises lethargic efforts from the government to support homeless people:

I look at my patients and think, we could’ve done something in the weeks before your death that would have prevented you from dying. The council, the community, providing somewhere safe to stay, more support around drinking or substance misuse, more mental health support. But that wasn’t provided and then you went on to use that lethal amount of drugs, or you spent too many nights outside

Worthley’s claims have considerable substance. The average age of victims of homelessness is very low and deaths are often preventable [pdf, p4]. In 2012, the average age [pdf, p4] of death for a man who dies whilst homeless was 47. For a woman, it was 43.

The Brighton GP lives in constant worry for his patients’ health and safety. He fears that every time he sees someone, he doesn’t know if he’ll see them again. Substance abuse coupled with physical and mental health issues are very common [pdf, p12] problems facing homeless people.

Research by Crisis found that drug and alcohol abuse caused a third of all deaths among the homeless population. Homeless people also have [pdf, p4] a much greater chance of dying from alcohol-related diseases (seven to nine times) or drug use (20 times) than people who aren’t homeless.

In London, nine out of ten [pdf, p12] homeless people who died since 2010 “had a mental health, drugs, or alcohol support need”. In terms of mental health services, 40% of mental health trusts in England received a consistent slashing to their budgets in cash terms every year from 2012-2016. Whilst there has been an improvement for 2016/17, trusts are still rendered unable to provide sufficient support services.

There isn’t the capacity to manage that complexity anymore. All those layers put in to support them have been stripped away one by one so these people have been thrown by the wayside. They are dying because of it.

We spend a lot of time trying to talk people out of killing themselves. I find myself saying, ‘Please try and stay alive and we’ll hopefully find something for you’

The death toll is rising

Homeless deaths are on a steep rise. Analysis by the Guardian and the Bureau of Investigative Journalism shows that homeless deaths rose from 32 in 2013 to 77 in 2017.

From January to April of this year, there have already been 40 recorded deaths. This is higher than the total for 2013 and an average of just over two deaths every week.

Homeless deaths will continue to rise so long as Tory austerity continues to render people homeless. As previously reported by The Canary, the number of older people becoming homeless is the highest in the past decade, 123,000 children are living in temporary housing and 38,390 single-parent families are now homeless and living in temporary accommodation. Crippling austerity must be stopped in order to help the most vulnerable people. And it needs to be stopped fast.

– Read our other articles about homelessness in the UK.