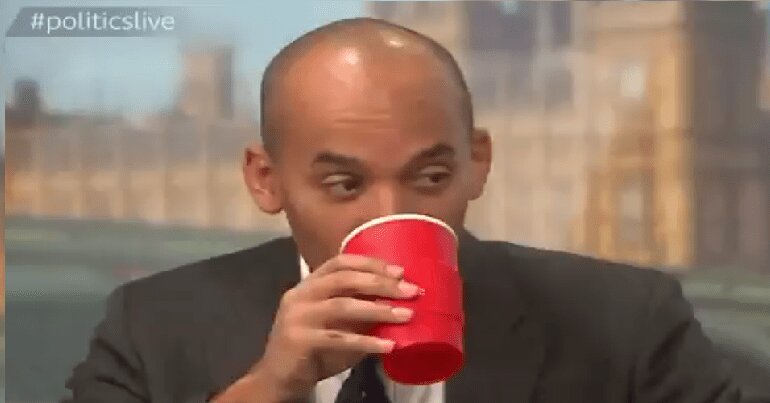 Even Blairite MP Chuka Umunna seemed to acknowledge he was caught red-handed on the BBC.

“Entrench a view that we’re some elite”

Presenter Andrew Neil confronted Umunna with video footage of him condemning calls for a second Brexit referendum. The right-wing MP said in 2016:

I’m sorry, I’m not one of those people who thinks we should be calling for a second referendum…. which will simply entrench a view that we’re some elite, who don’t want to pay any attention to the people.

But by August 2017, Umunna said the opposite, and has become a leading supporter of a second referendum. He joined 16 other MPs in calling for a re-run in December 2018.

Chuka Umunna does a Umunna….. "I'm not one of those people who calls for a second referendum" pic.twitter.com/H9QBvebMdB

In response, Umunna argued that there were conditions to his opposition to a second referendum, which he didn’t voice on that occasion:

I’d actually said that in parliament in a speech in September, but I caveated what I said by this… The fact that, if we could not deliver Brexit in the form that it was sold… with all the same economic benefits that we enjoy in the European Union

You didn’t say any of that there…. what matters is when you’re in front of the Labour Party or in the public. I mean… it’s a 180 degree turn.

I really have no time for calls for a second referendum because I think it comes across as disrespectful to those who voted to leave. Those calls reinforce what I feel is a false stereotype — of a bunch of people in London who think they know best… We are going to leave — it hurts me to say that — but we have got to move forward and work out how to get the best possible deal.

Remain didn’t lose by a landslide but was clearly defeated at the ballot box on June 23. I think it’s really important we listen and more deeply understand why people took a different view to us… The 52 per cent are no more a bunch of racists and bigots than the 48 per cent are a well-heeled metropolitan elite. I have no time for either characterisation.

As Neil and others keep highlighting, it will be easy for establishment figures to accuse Labour of an elite disregard for democracy if the party comes out for a second referendum. And the problem is: millions of Brexit voters will find it hard to disagree.