The HS2 railway could be putting drinking water at risk, but a court delay just worked in its favour - The Canary 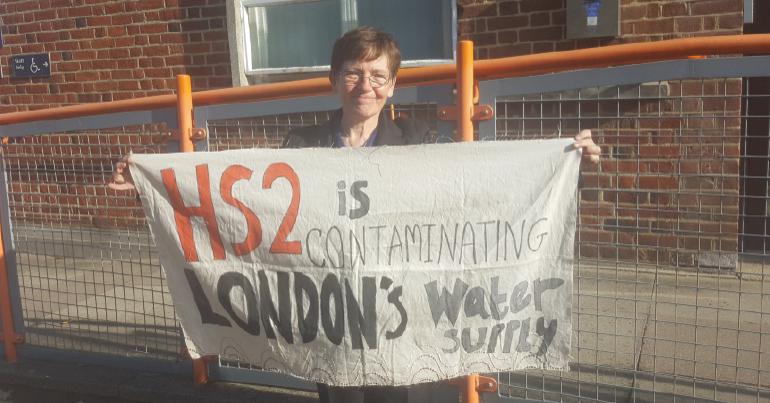 The Stop HS2 campaigner Sarah Green was due in court on Monday 1 April. Although she faced charges of aggravated trespass, she believed the case would give her the opportunity to prove HS2 Ltd is acting illegally. This is important, as activists claim HS2 Ltd is at risk of contaminating drinking water. As the trial has now been delayed until 17 July, potentially dangerous work could go ahead unchallenged.

Green is a campaigner with Stop HS2, which aims to stop the proposed ‘High Speed 2’ railway. On 11 December 2018, the group reported that Green and others ignored a court injunction to protest against work in Harefield, Middlesex. This work will see HS2 Ltd bore through a contaminated landfill site to access a chalk aquifer. As this aquifer provides drinking water to London, campaigners allege there’s a risk of contamination.

It is absolutely incomprehensible that HS2 Ltd can be so cavalier as to drill through known contaminants, which have already caused illegal levels of pollution and closed down one water supply, down into an aquifer which supplies drinking water for London, with absolutely no assessment of what might happen. This is not only dangerous, this is potentially a criminal level of incompetence and negligence.

Green welcomed the court proceedings, as the case hinged on HS2 Ltd’s actions being ‘legal’. According to the Water Frameworks Directive, a risk assessment should have been carried out by HS2 Ltd. The campaigners believe this hasn’t happened, and as Stop HS2 pointed out:

Sarah Green preparing to go in to her court hearing this morning. #HS2 #StopHS2 pic.twitter.com/SZbZTRPssv

Very much seems like the whole thing is getting deferred to a later date because the district judge still hasn't decided whether she will allow expert witnesses. Looking to adjourn to July #HS2

Judge now pointing out that she will only allow as many people in for adjourned trial as there are seats in the gallery, as it full today. #HS2 All done. Complete waste of time.

Speaking after this, Green said:

having had the trial now put off… this means that the pollution could well have been caused by then… We have now got to look to see whether this can be taken forward to Europe… this is an illegal act by the UK government, and this is what we’ll be pursuing next.

A victory for Green wouldn’t have meant HS2 had to cease its work, but the attention the case brought might have done. As Stop HS2 pointed out, “a former water pumping station has had to be shut down due to the contamination associated with this site”. That full and proper precautions do not appear to have been taken should be of serious concern to everyone.