While climate breakdown destroys one of the ocean's most important ecosystems, a new study shows there may be some hope - Canary Workers’ Co-op 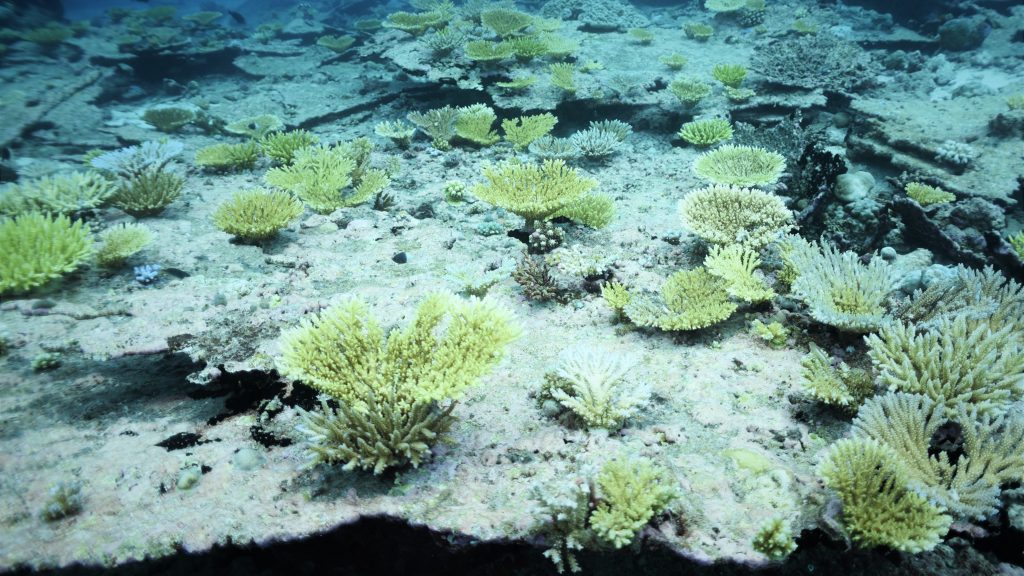 Back-to-back heatwaves in the central Indian Ocean killed more than two-thirds of corals in two years, a study has shown. But research by the Zoological Society of London (ZSL) suggests some corals were more resilient to the high sea temperatures, which could provide hope for the important habitat as the planet warms.

Scientists studied reefs in the remote Chagos Archipelago of the British Indian Ocean Territory (BIOT) before and after two ocean heatwaves. They brought unusually high sea temperatures and came 12 months apart. The study said that surveying of the sea floor between 2015 and 2017 found high sea temperatures led to the loss of nearly 70% of hard corals.

In 2015, seawater temperatures around reefs in the territory were unusually high for nearly eight weeks. Sea floor surveys before and after the heatwave saw live healthy coral cover fall by 60%. But before the corals could recover, another ocean heatwave that lasted four months hit in 2016. Although researchers were unable to assess the impact of the second heatwave across all the islands of the archipelago, data from the Peros Banhos Atoll show 68% of the remaining corals were bleached and 29% died. This suggests the heatwaves together killed around 70% of hard corals between 2015 and 2017.

The study said its findings are significant beyond just the Chagos Islands because:

Coral reef futures now predominantly depend on how [they] respond to repeated warming events, and if they can adapt to altered climatic conditions.

And ZSL said the study was important because the BIOT has remained “largely uninhabited” by humans since the 1970s. This provided an opportunity to study the impact of climate breakdown on coral reefs “relatively undisturbed” by direct human activity.

Coral reefs are one of the planet’s most important ecosystems. As the World Wide Fund for Nature (WWF) points out, coral accounts for just 0.1% of ocean area but supports 25% of its life. Its biodiversity “rivals that of the tropical forests of the Amazon or New Guinea”.

There was some good news, though. While the second heatwave lasted longer, it killed fewer of the surviving coral. Researchers suggest the remaining corals are more resilient to rising temperatures. Their ability to survive may be key to protecting reefs from rises in sea temperatures driven by global warming.

It is encouraging that reefs may have some degree of natural resilience, though further research is needed to understand the mechanisms by which some corals are able to protect themselves. This may be our best hope to save these vital habitats from the catastrophic effects of climate change.

However, the study pointed out that this is threatened by “increasingly frequent and severe thermal anomalies predicted as a consequence of accelerating global climate change”.

While it is a great disappointment to hear the news that a large per cent of coral in the central Indian Ocean has suffered from the devastating effects of back to back extreme sea warming it is encouraging to see that there is hope for many reefs. Building resilience to the effects of climate change is key to the survival of the world’s coral reefs. The [BIOT] Marine Protected Area is a vital living laboratory that can hopefully help answer some of the questions around how and why some corals still survive against the odds. This will not only help secure corals’ future in the Territory but also across the world.

Many Chagossians, their supporters, and international rights organisations have condemned the UK’s ongoing colonial control of the islands. In 2011, the Guardian reported on conflict between environmentalists and human rights advocates over British marine protection policies in the Chagos Islands. It’s crucial that we bring this to any discussion of ecological issues in the area.

Nonetheless, the latest study reveals for the first time just how deeply industrial society is impacting coral reefs. But it also shows how adaptable some species can be to problems that we have created. And they are also teaching us something important: it’s time for us to be adaptable to their needs.