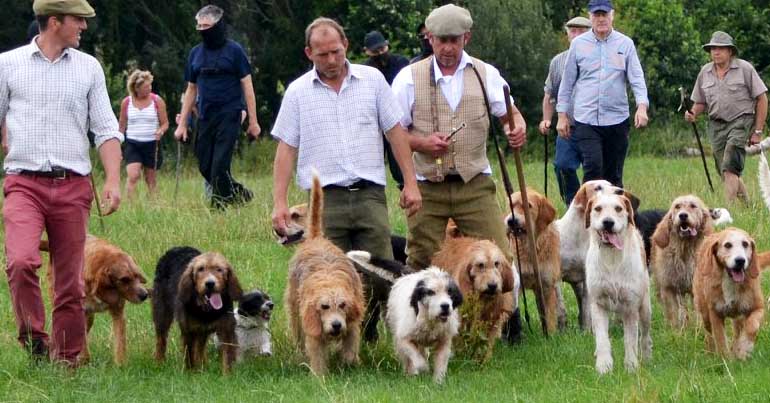 Tense footage shows the moment that hunt saboteurs ‘saved the life’ of what they said was an otter. Although otters were made a protected species more than 40 years ago, the activists claim people are still hunting them illegally.

“An otter was seen… fleeing”

Saboteur groups said they caught the Culmstock Hunt illegally hunting on 27 July on the River Coly, Devon. Uncut video published by Devon County Hunt Saboteurs (DCHS) shows an animal, claimed to be an otter, in the water (from 0:03) that quickly runs away (0:18-0:21). About a minute later, the footage shows hunting hounds following after the animal. Throughout this time, off-screen horn and voice calls can be heard. Severn Vale Hunt Saboteurs, who were present on the day, said:

The Hounds picked up on a scent in the undergrowth of the river bank and an otter was seen by sabs fleeing (see Devon County video) while [huntsman Mickey] Hibberd and whippers in on both sides of the water hunted the hounds on with voice and horn calls.

Sabs stop illegal otter huntYesterday we sabbed the Culmstock Minkhunt, together with sabs from Bristol, Bath, Severn Vale, Berkshire and Mendip Hunt Watch. Although they still call themselves a mink hunt (hunting mink is illegal since the ban), the Culmstock now claim to be hunting rats, although in actual fact these countryside vandals hunt and kill whatever wildlife they come across on Devon and Somerset's rivers, including otters. The hunt were followed from the kennels to the Gerrard Arms in Colyton where hunt staff and support spent about an hour and a half getting inebriated before jumping back in their cars and driving a few miles up the road towards Northleigh. They parked at Suddon's Cross, unboxed the hounds and headed down to the river. Within minutes they were joined by a large group of sabs who got straight in the river with the hounds.Huntsman Mickey Hibberd took hounds up and down stream for a while, trying in vain to get away from sabs. At one point an otter was seen fleeing upstream, closely followed by hounds in cry and Mickey hunting them on, all of which you can see in our video. Sabs sprayed citronella (a non-toxic plant oil) to foil the scent and 'rated' the hounds out of the undergrowth where they eventually marked to ground. The actions you see in the video saved this otter's life and half an hour into their day the hunt gave up and left the river. They were huddled around in the field for a while before making their way back to the road, where some of the hunt support decided to kick off and started attacking sabs, viciously beating them over the heads with their hunting poles. Police were called and the culprits' details were taken. We are sharing our footage of the assaults with the police and won't be commenting any further at this stage. As you can see from our footage, hunts continue to cause havoc on our rivers. Hounds don't distinguish between the scent of an otter, a mink, a rat, a water vole or any other wildlife, and when they're not being watched they will kill whatever they can get their hands on. We stop hunts through direct action. If you support our work, please consider donating to our fuel fund: https://www.paypal.me/dchs

DCHS said its actions “saved [the] otter’s life” and resulted in the hunt ‘giving up’. It also said the Culmstock Hunt “claim to be hunting rats“. However, the animal in the video appears larger than a rat and similar in shape to an otter or mink.

Saboteur groups also reported that some members of the hunt “turned violent” towards saboteurs.

The Canary approached Culmstock Hunt for comment but hadn’t received a response at the time of publishing.

Hunting otters became illegal after the government made the animal a protected species in 1978. As a result, packs that hunted otters changed to hunting mink. However, the Hunting Act 2004 also made hunting mink illegal. Despite this, about 20 minkhound packs still existed in England and Wales as of 2010. Mink and otters share “similar habitats” along riverbanks.

Hunting rats with dogs is currently legal. However, ‘ratting’ packs are usually made up of terriers and will hunt near human habitation, such as in barns, which is the brown rat’s most common habitat. Water voles, which can be mistaken for rats, live along riverbanks but hunting them is also illegal.

Like other forms of hunting, minkhound packs attempt to use loopholes in the law to continue their pastime. Unlike other forms of hunting with hounds, which ride through autumn and winter, they operate from March to September. The public is also less likely to see them because they are on foot, have fewer people, and stick to waterways. Otters are no longer endangered. But hunting them is no less disgusting than hunting any other type of animal.

It’s unusual for saboteurs to catch minkhound packs in the act, but with the Culmstock Hunt’s apparent cockiness it shot itself in the foot.