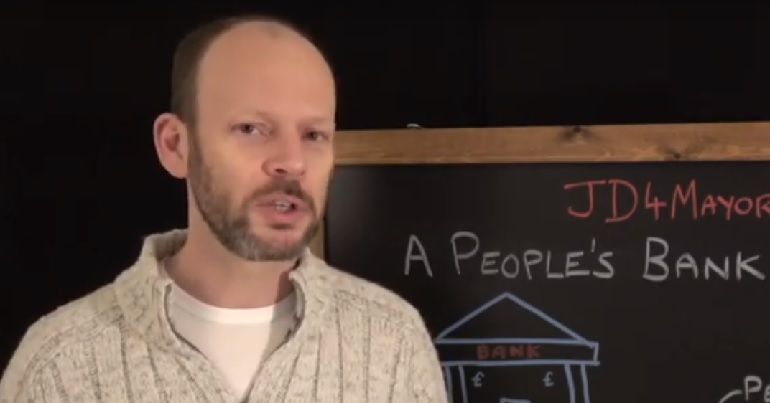 North of Tyne metro mayor Jamie Driscoll promised before his election that he’d set up a locally-owned ‘People’s Co-operative Bank’. Now in power, this plan has just moved one step closer to reality.

The first step towards creating a customer-owned bank

During his campaign, Driscoll promised to:

establish an independent cooperative to begin the process of establishing a bank owned by its customers – the people and the small & medium businesses of our region, based here and recycling the savings of our region into loans for our region.

And on 30 July, ChronicleLive reported that the cabinet of the North of Tyne Combined Authority approved £35,000 “for a due diligence study for the proposed bank”. Driscoll explained before becoming mayor that this would be the “first step”, saying:

An independent accountancy firm would look at all the numbers on the business model, and verify that everything stacks up… If the plan passes due diligence, the mutual society will be established, and initial staff hired to guide through the start-up process. The Mayoral authority would commit to fund this stage of the operation, costing approximately £300k. This will take us through the stages of application and detailed business planning.

According to ChronicleLive, Driscoll “expects to see the results of the feasibility study on his desk this year, before applying for a banking licence – a process that could take another two years”.

Keeping money in the local area

In 2017 Redwood Bank opened, a highly successful specialist bank that lends to SMEs. It gained 33% of its funding from Warrington Borough Council. The Welsh government, and at least six other local authorities are already well advanced down the route to opening regional banks on and identical model to the one I propose. They have raised £millions between them.

And describing the benefits for the local economy, he said:

In short, it keeps money here. When people borrow from banks, money leaks out of our region in two ways. First, the bank is usually headquartered far away, so most of the jobs it supports are not here. Secondly, a large amount of their profits are paid to the shareholders as dividends. Often, these shareholders are in turn holding companies. Even at today’s historically low rates, you’ll end up paying 60p in interest for every £1 you borrow. For a typical homeowner, that’s 12% of your entire take home pay leaving our region. Keeping that money here creates spending power here, creating more jobs and more prosperity.

Local businesses will get interest on their current accounts, and more access to the finance they need.  There’s about £1.4bn in business lending to SMEs in the NE postcode area alone.  The interest on this lending goes to banks based outside our region, with shareholders needs placed above the customers’…

The bank will also support local community causes once it’s mature and in profit, and of course, create high quality jobs here.

He also released this video explainer during his campaign:

Further work on “a world first”

According to the Combined Authority website, meanwhile, Driscoll is also “working with the United Nations to bring world-class environmental education to every school in the North of Tyne”. It explained that:

Each state-funded school in the combined authority area will have the opportunity to train one member of staff as a UN accredited climate change teacher.

The pledge… is a world first and meets a key UN target for sustainable development.

Driscoll immediately declared a climate emergency when he took office in May.

Local teacher Meryl Batchelder is leading the project. And she said:

Labour Party leader Jeremy Corbyn has recently made his plan for a “green industrial revolution” a core part of his campaigning.