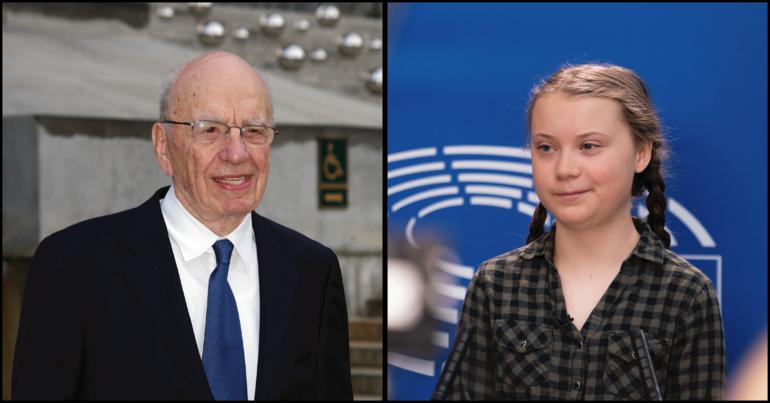 It’s well established that newspapers are losing readers. They’re especially struggling to pick up younger ones. Going off this latest attack on a teenage climate activist by the Rupert Murdoch-owned Herald Sun, it’s easy to see why:

As the deeply disturbed Greta Thunberg spreads her climate panic, we should ask why so many world leaders are listening to her, writes Andrew Bolt.https://t.co/zhPC5trXuW

The opinion piece by Australian Sky News host Andrew Bolt doesn’t just dismiss Thunberg because she’s young; it also gets some ableism in there:

She suffered years of depression and anxiety attacks and was finally diagnosed with Asperger’s syndrome, high-functioning autism, and Obsessive Compulsive Disorder. Her intense fear of the climate is not surprising from someone with disorders which intensify fears.

None of these issues should disqualify a person from contributing towards society (this writer is autistic and has had anxiety / depression issues in the past). Also, Thunberg isn’t just making stuff up – she’s speaking out about well-researched science that 99% of climate scientists have faith in. She’s also in line with the majority of young people in listening to scientists over right-wing news hosts.

Bolt does briefly try to make an argument that climate change isn’t real:

What is so fascinating about this Thunberg cult is not just that she’s believed so fervently even though she’s wrong.

(The evidence does not suggest that humanity faces doom. The world has recently posted record grain crops and record life expectancy.)

This is literally the entirety of his scientific argument. It’s bizarre.

Pointing out that we produced more grain crops last year doesn’t really tell us much, as the climate catastrophe we want to avoid hasn’t happened yet. The Food and Agriculture Organization of the United Nations is also expecting levels to dip again in 2019/20.

Bolt ignores (or just doesn’t know about) the world’s soil issue. This is separate to climate change but happening at the same time. Estimates predict that soil degradation means we have 60 years of topsoil left, as nutrients are being used at between 10 to 40 times the rate at which they can be replenished. To be clear, we need topsoil to grow crops. But you don’t read about this much in the Murdoch press, because like climate change, it requires a global, communal effort.

The Sky News host furthermore ignores that drought and crop failures are already happening – creating literal exoduses of people. His point about life expectancy, meanwhile, has no bearing on climate breakdown whatsoever. As of right now, it just means more of us will live to see the worst of it.

People were horrified but not necessarily surprised:

Saw the headline. Didn’t realise it was one of his filthy rags. I should have guessed though

Just so everybody in the country is aware, Newscorp will now perform their special dance of 294 articles about Greta Thunberg, constant multi-format badgering and harassment of everybody and everything involved, weaponised news as slow assault. They know it works.

In case you're wondering where the good people of the @theheraldsun are at on climate change, they're currently publishing articles saying Greta Thunberg has "many mental disorders.

In any normally functioning organisation, this would be called out by colleagues and leaders. pic.twitter.com/SwHBRTmzr6

The best shot came from the “guru” herself:

I am indeed ”deeply disturbed” about the fact that these hate and conspiracy campaigns are allowed to go on and on and on just because we children communicate and act on the science. Where are the adults? pic.twitter.com/xDSlN0VgtZ

Not everyone agrees that Thunberg is a source for good. David Icke, the former sports broadcaster who promoted the ‘lizard people run the world’ conspiracy, is in line with the Murdoch press on that:

Let them sail yachts: Why Greta Thunberg and the environmental elite hate you https://t.co/rXnUtlPTKt pic.twitter.com/jp7Aha605m

Papers like the Herald Sun are one step away from this nonsense. Young people aren’t interested in this shit. That’s why the end is coming for the Murdoch press, even if we do avoid climate collapse.