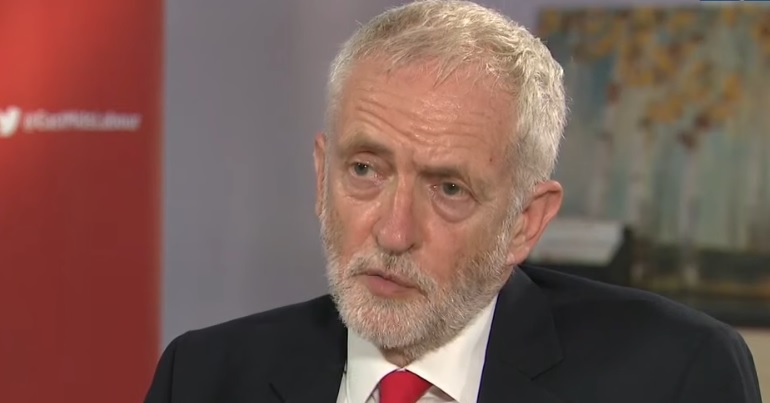 Nigel Farage has revealed that the Brexit Party will not contest any of 2017’s 317 Tory seats in the upcoming election. Instead, Farage said the party will put its “total effort” into Labour-held areas.

On Twitter, Jeremy Corbyn pointed to who and what he believes would be the real winners and losers of any successful Brexit Party/Tory “pact”. His comments, which centre on one of the election’s most important issues, don’t bode well for Boris Johnson.

One week ago Donald Trump told Nigel Farage to make a pact with Boris Johnson.

Today, Trump got his wish.

This Trump alliance is Thatcherism on steroids and could send £500 million a week from our NHS to big drugs companies. It must be stopped.

Corbyn is referring to comments the US president made on 4 November. Donald Trump said what he would “like to see is for Nigel and Boris to come together”. Now, Farage has decided not to stand Brexit Party candidates in areas held by Conservative MPs, signalling that he’s trying to help Johnson’s party out. So Corbyn rightly says the US president “got his wish”.

Corbyn also argues that the NHS could lose big from this “Trump alliance” (i.e. Farage, Johnson, and the US president). Because he says the health service could “send £500 million a week” to pharmaceutical companies as a result.

Channel 4‘s Dispatches recently revealed that UK and US officials have discussed “drug pricing” in six meetings on a post-Brexit trade deal. The programme also highlighted that there have been “secret meetings between US drugs firms and British civil servants” which included discussion of “price caps”.

This could be a pivotal issue in any UK/US trade deal. Because the NHS essentially caps the prices it will pay for drugs based on assessments made by the National Institute for Health and Care Excellence (NICE). The price it negotiates with companies is often lower than the market rate. Those NHS prices, meanwhile, are also used as a baseline by other countries. So numerous countries avoid paying market rates as a result of the NHS system.

Trump isn’t happy with this set up, however. So US negotiators have said they want “non-discriminatory” access to the UK market in any deal. And the US has form on the issue. Its trade agreement with South Korea stipulates that drug prices should be “based on competitive market-derived prices”.

The £500m figure that Corbyn cited comes from an academic report which gave the “worst case scenario” for price increases based on spending on drugs in the US.

Johnson’s government has made numerous pledges on the NHS since its inception. Clearly, it understands what an important issue access to healthcare is to the majority of Britons. On drug pricing, in response to the Dispatches revelations, it said:

The NHS is not, and never will be, for sale to the private sector, whether overseas or domestic‎… The sustainability of the NHS is an absolute priority for the government. We could not agree to any proposals on medicines pricing or access that would put NHS finances at risk or reduce clinician and patient choice.

But since the Conservatives came to power in 2010, they have systematically brought the NHS to its knees. The party introduced legislation in 2012 that has allowed private companies to scoop up the most profitable parts of our health system, and be paid for it handsomely with our taxes. It has also starved the NHS of adequate funds, forcing numerous trusts into financial trouble, and overseen a major staffing crisis.

In short, the Conservatives are on very shaky ground when it comes to people trusting it with the NHS. And hearing that the party is part of a “Trump alliance” that could see big pharma rinse the health service for eye-watering sums will do nothing to improve its reputation.