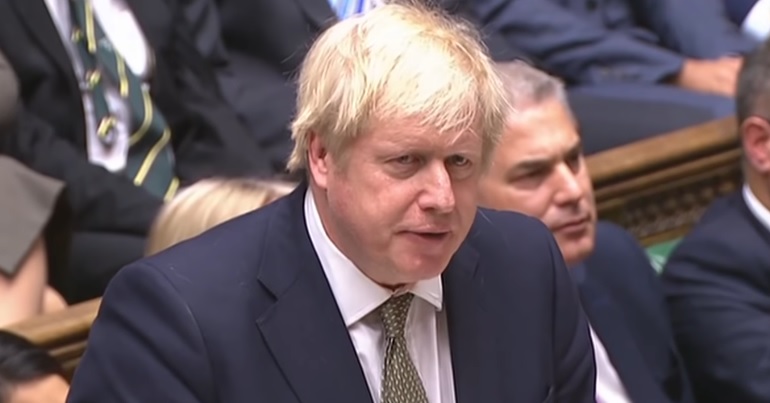 It confirmed that the pledge he made during the election campaign for a £10.50 living wage was, frankly, nonsense – as was the promise not to further weaken workers’ rights. And it illustrated that the country is at risk of moving in a ghastly authoritarian direction.

But one appalling detail in the speech also showed that those who voted for the Tories in the election were voting against their children’s future.

The world is living through a climate crisis. And although Britain may not be currently feeling it as strongly as those in the global south and the Arctic region, make no mistake, it is a threat to the feasibility of widespread life on earth within our children’s lifetimes.

Back in 2018, the UN told the world that we have 12 years left to make changes and choices that will bring us back from the brink of catastrophic climate change within this century. We’re now on the cusp of 2020, so that’s 10 years left.

Air travel is one of the things we need to change, because it’s a heavily polluting industry. As the Guardian has pointed out:

a long-haul flight produces more carbon emissions than the average person in dozens of countries around the world generates in a whole year.

Yet Johnson’s government is planning to increase the number of flights in Britain’s airspace. Its air traffic management and unmanned aircraft bill detailed in the Queen’s Speech will ‘modernise’ air traffic regulations so they “support sustainable growth” in the sector.

However, there’s no such thing as ‘sustainable’ growth in air travel, at least not growth that’s sustainable for our planet. Friends of the Earth campaigner Jenny Bates said:

You can’t have so-called sustainable growth in a sector like this and stop the climate crisis. And while some may believe developing technologies like electric planes will deliver a green travel future these are nowhere near being a reality.

The real solution, as part of the fight against climate breakdown, is far fewer planes in our skies. Instead, the opposite is being encouraged with airport expansion projects, including the planned third runway at Heathrow.

The Conservative Party’s decision to add to carbon emissions via air travel isn’t surprising, however.

Firstly, although it claims to be aiming for net zero emissions in Britain by 2050 (which it is already failing at achieving), the party of government conveniently omits air travel and shipping emissions from its carbon accounting.

Secondly, ahead of the general election, both Greenpeace and Friends of the Earth told the public that the Conservatives’ climate plans were among the worst on offer. Only the Brexit Party scored less than the Conservatives in Grennpeace’s analysis. The government has also removed a guarantee of continued standards on environmental protections from its withdrawal bill.

Meanwhile, the Green Party’s Caroline Lucas pointed to a glaring omission in the Queen’s Speech:

Unbelievable that PM’s speech on #QueenSpeech, the PM made no mention of the #ClimateEmergency
No wonder that yesterday the Committee on Climate Change wrote to him to say UK efforts on it “have so far fallen short”
If this is to be #ClimateParliament, we need much much more

Given the mortal threat posed to us by the climate crisis, it should have been the key issue in the election, as it has been in other countries’ recent elections. Especially as it’s a crisis of our own making. But, aided by Britain’s pro-Tory media, the Conservatives managed to make it a ‘Brexit election’.

As a result, voters have ushered a party into government that has actively encouraged and championed the sort of business that will make the climate crisis worse, and is now introducing policies that further imperil our children’s futures.

That’s unlikely to be what many parents were hoping for when they put an X in their Conservative candidate’s box. But it is exactly what they’ve landed the planet – and their children – with.