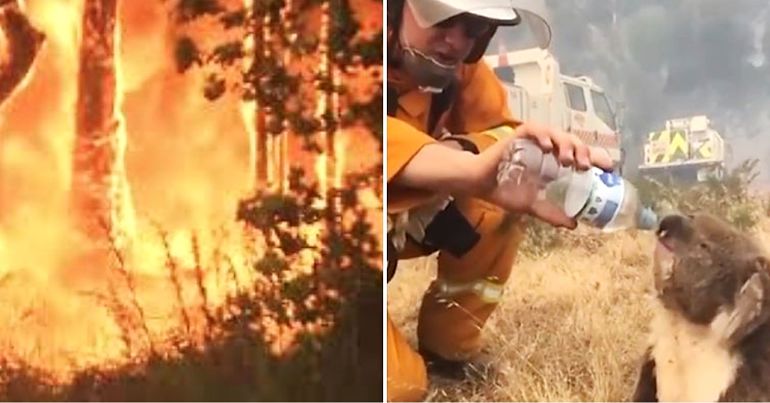 On 6 January, it finally rained in Australia. This means that vital evacuations can take place for thousands of people stranded by devastating fires. But the crisis is far from over.

Wildfires have been burning in Australia since September 2019. Although bushfires happen every year, rising temperatures, low rainfall since 2017, and drought conditions created what former Australian prime minister Kevin Rudd called “a national apocalypse”.

So far, it’s estimated around half a billion animals have died in New South Wales (NSW) alone. Thousands of people have been evacuated and displaced; many others were stranded as fires moved, swiftly cutting them off. It’s still too early to assess the full extent of the disaster, but as Reuters reported, fires:

ripped through more than 6 million hectares (14.8 mln acres) of land in the two most populous states of New South Wales (NSW) and Victoria, killing 24 people so far, razing thousands of buildings and leaving some towns without electricity and mobile coverage.

It may be difficult to visualise these numbers, but a map of the fires as they’d look in Europe gives clearer context:

If you want an idea of how bad the fires are in Australia, take a look at this super imposed map.#AustralianFires #AustralianBushfire pic.twitter.com/VQ28TgkTyT

As rain fell, it offered much-needed respite, and at least some, brief hope for wildlife and those stranded.

Rain is falling in Australia and this picture is all shades of heartwarming pic.twitter.com/FopEyVUR96

But the crisis is far from over.

Australian prime minister Scott Morrison and his government’s response to this disaster fuelled the flames further. As the crisis escalated, Morrison refused to cut short a holiday in Hawaii. He then tried to ‘force’ photo opportunities with firefighters and survivors:

He’s since been widely condemned for a party political government advertisement. Griffith University integrity expert Professor AJ Brown called it “deceptive” for trying to claim that Morrison’s Liberal Party, and:

not the government and Australia’s own taxpayers were the ones putting ‘boots on the grounds’, sending navy ships and supplying masks.

That is atrocious not only because it was factually wrong, but because of its divisiveness.

Rudd called Morrison’s response “evasive, tepid, tone-deaf and, above all, too late”. Because over and beyond the immediate response, these fires highlight the terrifying implications of the ongoing climate crisis. Although this is a global issue, the Australian government’s track record is appaling. Former PM Tony Abbott claimed climate change was “absolute crap”. In 2013, he abolished Australia’s Climate commission:

"The Climate Commission has been abolished and work has begun to scrap the Climate Change Authority (CCA) in what has been described as a black day in the fight against global warming in Australia."#AustralianBushfire #DearYourMajesty https://t.co/IakrsQBysJ

In November, deputy prime minister Michael McCormack called anyone linking the fires with climate breakdown “inner-city raving lunatics”. In December, Abbott claimed on Israeli radio that the world’s “in the grip of a climate cult”. And as Rudd noted, Abbott’s “denialist cult” seems to rule policy, backed up by Rupert Murdoch:

In Australia, as in America, the conservatives’ strategic partner in climate change denial has been the Murdoch media. Rupert Murdoch, feeling the heat of public opinion, claimed recently there were no climate deniers at News Corp! The Murdochs, senior and junior, must believe the Australian people are total fools. Murdoch’s papers remain a command centre for the entire mission of climate policy obstruction.

So the PM says he will spend ‘whatever it takes’ to recover from bushfires but his party has spent a two decades spending as little as possible to prevent them #preventioncheaperthancure #AustralianBushfire #auspol https://t.co/Qn8oZbClWc

But this disaster affects us all.

Joëlle Gergis, a lead author of the Intergovernmental Panel on Climate Change’s (IPCC) Sixth Assessment report, wrote in the Guardian:

As a climate scientist, the thing that really terrifies me is that weather conditions considered extreme by today’s standards will seem sedate in the future. What’s unfolding right now is really just a taste of the new normal.

At this point I could restate all the lines of scientific evidence that clearly show the links between human-caused climate change and the intensification of extreme weather conditions not just in Australia, but all over the world.

I’ve found myself wondering whether the Earth system has now breached a tipping point, an irreversible shift in the stability of the planetary system.

There may now be so much heat trapped in the system that we may have already triggered a domino effect that could unleash a cascade of abrupt changes that will continue to play out in the years and decades to come.

Rapid climate change has the potential to reconfigure life on the planet as we know it.

Morrison’s government has a vital role to play. But so too does every government around the world. Because we urgently need action to limit climate breakdown any further.

For millions of animals and thousands of people, the rain offers momentary and welcome respite. But temperatures are set to rise, and the fires are far from over. Added to that, the land is so weak that torrential rain may bring new problems:

Governments of Australia it is now also time to consider mitigation measures for the affect of heavy rain when it eventually comes. There is no ground cover left to hold the land together. Another disaster waiting to happen. #AustralianBushfire #planning #leadershipmatters

And amid this crisis, it’s vital to remember that it only took white colonialists around two hundred years to wreak this much destruction on a whole continent:

We need to turn back the clock two hundred years and return the keys to the Aborigines to manage this delicate continent. We have failed. #AustralianBushfire #bushfireaustralia #australiafire https://t.co/wpM8PUuCak

Less than a week into a new decade, the tragedy of these Australian fires must prompt each and every one of us to take urgent action for change. Demonstrations won’t be enough now. Incompetent governments and outmoded political systems need to go.