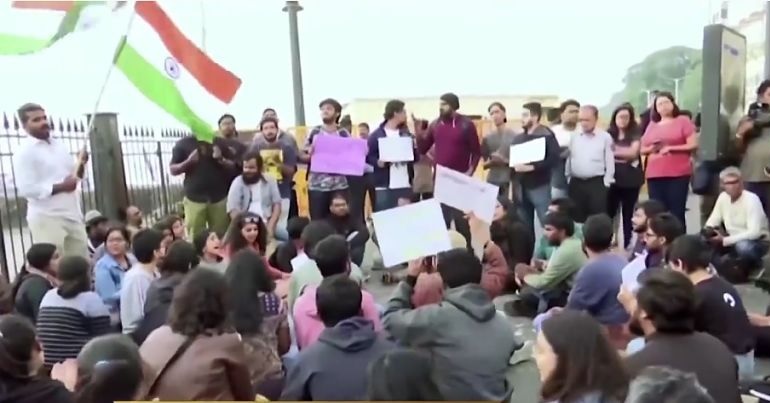 Student protests are taking place across India after an attack on a university that an opposition party has branded “state-sponsored terrorism”. The protests follow weeks of unrest in India over a new citizenship law which discriminates against the 200 million Muslims in the country. At least 27 people have reportedly died during the government’s crackdown on these protests.

The brutal attack on JNU students & teachers by masked thugs, that has left many seriously injured, is shocking.

The fascists in control of our nation, are afraid of the voices of our brave students. Today’s violence in JNU is a reflection of that fear.

“We have to stick together”

A masked mob attacked students and teachers at Jawaharlal Nehru University (JNU) on 5 January. As the Guardian reported, people see Delhi’s JNU as a “bastion of leftwing politics”. Students and opposition politicians claim that Akhil Bharatiya Vidyarthi Parishad (ABVP), a student body linked to the governing party, was responsible for the attack.

Even after it was over, I had the most fearful night of my life, lying awake listening to every footstep in the corridor.

A number of students left the university on 6 January over concerns for their safety. Satarupa Lahiri was one of those to remain. She explained:

It feels like a battle zone. We are walking around only in groups of 10 or 12 for safety.

I am staying. Some students live a long way away and can’t afford the fare home so we have to show solidarity by staying on. We have to stick together.

Protests are taking place in Delhi, Bangalore, Chandigarh, Mumbai, and Hyderabad in response to the attack. The police and emergency services face accusations of being slow to respond to the incident. Eyewitnesses also told Reuters that some police officers watched the attack unfold and did nothing.

The ABVP has denied responsibility, appearing to blame left-wing students for the violence. But the Indian National Congress party branded the attack “state-sponsored terrorism”, with member Rahul Gandhi tweeting:

The fascists in control of our nation are afraid of the voices of our brave students. Today’s violence in JNU is a reflection of that fear.

India’s students have been making their voices heard in recent weeks by organising resistance to the Citizenship Amendment Act. The law, introduced by prime minister Narendra Modi, is widely considered Islamophobic, as it provides a route to citizenship for asylum seekers except, explicitly, those who are Muslim.

The state’s response to the protests has been violent. In December 2019, police went into Jamia Millia Islamia University (JMI) during a protest. Undergraduate student Iman Usmani described what happened:

They fired teargas shells at us, before they resorted to caning us ruthlessly. They did not even spare the girls. I received several injuries mostly from the beatings by the police. I fell unconscious. Some senior students took me to a hospital where I received medical treatment.

The police claim they weren’t violent towards female protesters. Usmani says that is untrue.