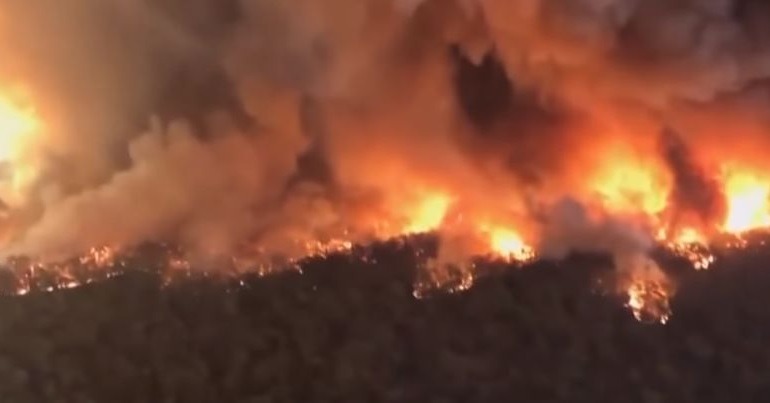 When it comes to the climate, our obsession with national borders is immaterial. The world has watched in horror as Australia has burned over the last five months. But the fires aren’t solely affecting those in their immediate and devastating path or, indeed, those choking on the smoke from them in near (or far) countries.

As the UK’s Met Office has recently pointed out, one terrifying fallout from the fires is coming to all of us this year. Because, on this shared planet, we really are all in this together.

Australian wildfires will help push up carbon dioxide (CO2) levels in the atmosphere to new highs in 2020, the Met Office has said. It predicts 2020 will see one of the highest annual increases in CO2 levels since records began more than 60 years ago.

This year, levels of CO2 are set to rise by around 2.7 parts per million (ppm) compared to 2019, peaking at 417ppm of CO2 in the atmosphere in May. 2019 itself also saw a steep rise in CO2 by 3.5ppm in May compared to the previous year, with the overall level rising to 414.8ppm that month. May is generally the month of the year where CO2 levels reach their yearly peak; September/October is usually the lowest annual point.

The predicted average CO2 level for 2020 is 414ppm. Pre-industrial levels of CO2 were around 280ppm. Levels are set to remain above 410ppm throughout the year for the first time, according to the Met Office.

The increasing levels of greenhouses gases like CO2 in our atmosphere push up the temperature of the planet. As NASA explained in a 2010 study:

carbon dioxide is responsible for 80 percent of the radiative forcing that sustains the Earth’s greenhouse [warming] effect.

Detailing the cause of the CO2 increase, the Met Office said:

While human-caused emissions cause the CO₂ rise in concentration, impacts of weather patterns on global ecosystems are predicted to increase the rise by 10% this year.  Emissions from the recent Australian bushfires contribute up to one-fifth of this increase.

As the Met Office noted, human activities such as burning fossil fuels have been pushing up levels of carbon dioxide in the atmosphere every year. But around a tenth of the projected increase in 2020 is due to the impact of weather patterns. According to analysis in 2019 by Carbon Brief:

68% of all extreme weather events studied to date were made more likely or more severe by human-caused climate change. Heatwaves account for 43% such events, droughts make up 17% and heavy rainfall or floods account for 16%.

These weather patterns create conditions in which plants grow less and absorb less CO2. Weather patterns linked to swings in temperatures in the Pacific Ocean also affect the rise in carbon dioxide levels, because in years with a warmer tropical Pacific many regions become warmer and drier.

This will make blazes such as Australia’s devastating bush fires more likely.

As Professor Richard Betts, of the University of Exeter and the Met Office Hadley Centre, explained:

Although the series of annual levels of carbon dioxide have always seen a year-on-year increase since 1958, driven by fossil fuel burning and deforestation, the rate of rise isn’t perfectly even because there are fluctuations in the response of ecosystem carbon sinks, especially tropical forests.

Essentially, ecosystems have limited some of the potential temperature rise on our earth, by absorbing the CO2 we’ve put into the atmosphere. But human-induced warming and atmospheric disruption drive weather patterns that are damaging those ecosystems. That leaves nature in much less of a position to help us.

In short, we’re heading nowhere good – and we’re hurtling towards that destination fast. Scientists say we must not exceed CO2 levels of 450ppm, which would set us on course for global warming of 2°C. Indeed, many argue we should not go beyond a temperature rise of 1.5°C. That is if we want to avoid catastrophe.

Featured image via Guardian News/YouTube and additional reporting from PA