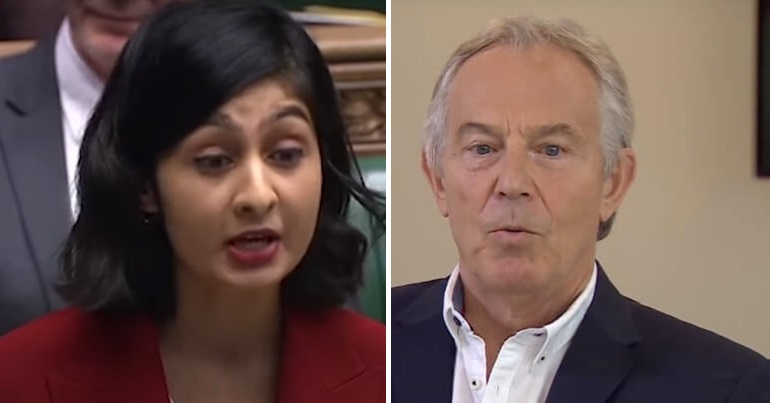 In a desperate attempt to defend his legacy of ‘Thatcherism-lite‘ politics, Tony Blair has hit out at Jeremy Corbyn. But it only took one tweet from a new MP to demolish his argument.

Blair put out a video in which he said:

I don’t often respond to the Leader of the Labour Party’s attacks on the last Labour government, but enough is enough.

He went on to criticise Corbyn for lumping decades of Tory and New Labour rule together and tried to distinguish his own record in power from Margaret Thatcher’s.

Labour’s Zarah Sultana, however, responded with a revealing quote from Blair after Margaret Thatcher‘s death in 2013:

"I always thought my job was to build on some of the things [Thatcher] had done rather than reverse them." – Tony Blair, 2013. https://t.co/CLdSvTzUXx

For most left-wingers, Thatcher has few redeeming features. She decimated working-class communities and workers’ rights, leaving unemployment, destruction, and poverty in her wake. That legacy saw many communities across the country celebrate when she died.

As ROAR magazine wrote in 2016, Thatcher “deregulated the financial sector with a religious ferocity”; she assaulted the labour movement and tore the British welfare state apart like no one ever had before; and people hated her not just for her policies but because of how she personified “the naked logic of class warfare operating underneath the technocratic surface of her neoliberal project”.

Neoliberalism (i.e. austerity, privatising anything public, and giving companies total freedom to do what they want) has brought misery to ordinary people around the world for decades. And even its main backer has admitted that it’s boosted inequality. Under this dominant form of capitalism, money is god; and equality is a dirty word.

Blair’s government wasn’t exactly the same as Thatcher’s. But it didn’t represent a meaningful break from the elitist political environment that Thatcher had built. And in this sense, Britain has not yet defeated Thatcherism. That’s why Sultana, in her brilliant maiden speech in parliament, said:

In 10 years’ time, at the start of the next decade, I want to look teenagers in the eye and say with pride: my generation faced 40 years of Thatcherism, and we ended it.

Blair may dislike people lumping him in with Thatcherism, but it’s a hard legacy to escape. And it hardly helps that, since stepping down as prime minister, he has spent his time cosying up to dictators and making millions (including over a million from British taxpayers).

Along with the eternal stain that the disastrous invasion of Iraq left on his time in power, his domestic record speaks for itself. Because his government used token progressive policies to hide its true right-wing nature. It abandoned and ignored working-class communities (along with Labour members and trade unions); continued financial deregulation to please wealthy elites; kick-started the privatisation of the NHS; propped up the very structures which created the capitalist crisis of 2007–2008; and lost five million voters between 1997 and 2010. His government left people across Britain with a lack of trust in politics; and this helped to spark the disenchantment that fuelled the Brexit vote, with many people perceiving overwhelmingly that living standards had been deteriorating for decades.

In short, it’s no surprise that Labour members today have little love for Blair:

Sultana is spot on. We must call out Blair’s role in keeping Thatcherism alive. His toxic form of centrism polluted British politics, and doesn’t offer the solution going forward. Because the 2019 election wasn’t just about media propaganda, our appalling electoral system, and Brexit; while Corbyn’s Labour lost ground, centrism lost ten times more.

So Blair, please just shut your trap for once.