We all need to listen to the woman on Question Time last night. Our future depends on it. - Canary 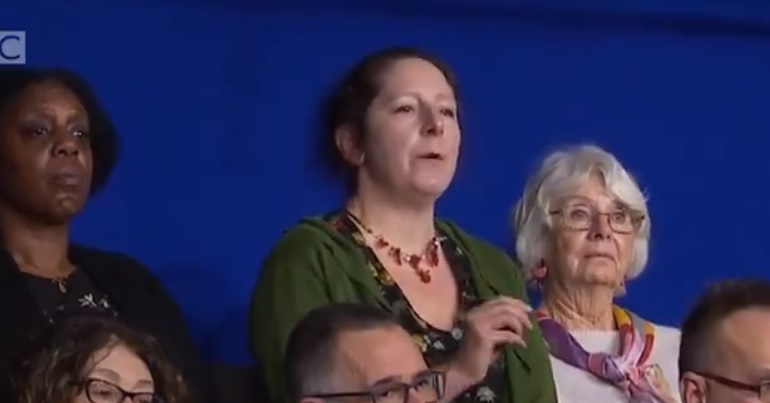 A Question Time audience member broke through the babble with a vital message on 9 January. And it’s one that British people need to deal with urgently if they’re going to win the class war which economic and political elites are waging against them.

Take on the media establishment, or face defeat again and again

The woman first called out the “relentless campaign” of misinformation and attacks against Labour leader Jeremy Corbyn by the UK’s billionaire press. She then insisted that “anyone standing for socialism will receive the same thing” and that establishment media outlets “will not let a socialist be elected in this country”:

‘People seem to think Meghan Markle was harassed and hounded by the press, that wasn’t a millionth of a scratch of the relentless campaign about Jeremy Corbyn’

This #bbcqt audience member says the media will not allow a ‘socialist to be elected in this country’. pic.twitter.com/0IHPw0j2uN

Billionaires dominate Britain’s media environment today. Just three companies control around 83% of newspapers – an increase from 71% back in 2015. Roughly 80% of online media, meanwhile, sits with only five companies. In short, press barons and their establishment allies have immense power to wage class war against ordinary people through the media. As part of this, they’ve played a key role in vilifying Corbyn via a years-long war of smears:

Corbyn’s personal unpopularity was fostered by hostility from powerful forces: the billionaire press, the business elite, the traditional political class.

Any politics that aspires to win for workers will have to confront these. We must do it better, not shy away from the fight.

With this in mind, the British people desperately need a media revolution. Because without one, the country’s elites will keep clutching onto power with all their might.

Shame on the media

Britain’s billionaire media wasn’t about to let Labour’s massive breakthrough in the 2017 election happen again. So it went all out in the 2019 election to stop Corbyn’s party from winning. As three academics wrote after the election, “the mainstream media continue to play a vital role in informing and priming public opinion during elections”, both offline and online. And they shared the following revealing images:

The Loughborough University research found that “press hostility to Labour was more than double the levels identified during the 2017 election” and that “negative coverage of the Conservatives almost halved in the final week of the 2019 campaign”.

But while Corbyn’s progressive policies may have been the big reason the rich and powerful hated him, they weren’t responsible in any meaningful way for voters backing Boris Johnson and the Tories. Because Brexit, overwhelmingly, was the key factor for the electorate (along with related issues and media smears). And as Prof Natalie Fenton wrote after the election, the Tories kept Brexit at the forefront. Their “rebuttal tactics were robust”, she said, with them simply ‘side-stepping’ issues where they were weak and repeating “Get Brexit Done” (which itself was misleading). Johnson himself, meanwhile, consistently hid from media scrutiny as his party “focused on messages that would be crowd-pleasing, circulate rapidly and feed off emotional responses rather than accuracy”. As media lecturer Justin Schlosberg said:

The extent of disinformation tactics used by both Tories and Lib Dems in this election has far surpassed anything in the EU referendum.

If we had a more responsible and democratic media this would be THE story of the electionhttps://t.co/Y1TirCpaEy

If there were regulation in place to protect U.K. public from false, distorted reporting from media, every mainstream outlet would be closed down tomorrow. Read below the “Editor’s code of practice”, meant to be enforced by IPSO, one of most useless bodies in the country. https://t.co/2wMfOOJsvM

Politics is not a level playing field

He explained how the Tories launched “an offensive to defend elite power and privilege” which “involved both vilifying and ridiculing Labour policies”. And he stressed that:

The Tories flooded Facebook (especially in the last week of the campaign) with ads, 88% of which, according to First Draft, contained misleading claims

This wasn’t helped by the fact that Facebook gives political posts a free pass on fact-checking.

unencumbered by a responsibility to tell the truth, Johnson simply lied on air … knowing that by the time the fact checkers got around to challenging their veracity, the damage was already done.

The BBC‘s behaviour in particular consistently favoured the Tories.

Many weapons are used in class war but media power is a central part of the generals’ arsenal.

For that reason, he said, “any radical opposition… will need an insurgent movement to face this down”. That means all progressives need to turn away from establishment media and give their full support to independent media. Because without that, the Question Time audience member’s predictions will come true.