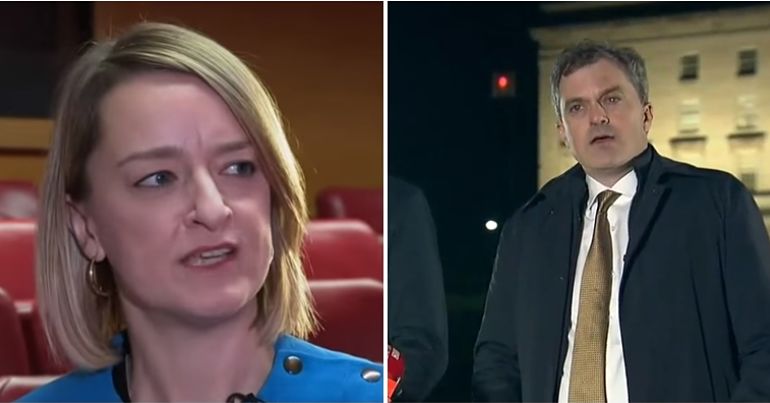 On 11 January at 1pm, Stormont (north of Ireland parliament) reopens. This is welcome news for local people who haven’t had a government since January 2017 and whose public services began to “decay” as a result.

So it surprised people when the BBC’s Laura Kuenssberg heaped praise on the Conservative government in London and the Northern Ireland secretary Julian Smith. She made no reference at all to local people. But she was soon put straight.

Road ahead is tricky sure, but getting Stormont up + running is a v significant early achievement for govt, and in particular for NI Sec Julian Smith who announced deal alongside Simon Coveney last night before both sides had agreed – https://t.co/WrEk419o7J

Kuenssberg’s biased intervention hardly even mentioned local representatives. So when people took to social media, they reminded her of this and the need to remain impartial:

Early achievement for the UK Govt? What abt the other parties involved?

Have you forgotten how to be impartial?

While another person reminded Kuenssberg of other Tory “early achievements”:

Then one other person noted how the Tories’ close relationship with the DUP may have stalled this from happening much sooner:

What it meant to have no government

There’s an implicit insult in Kuenssberg’s praise for the government. And it isn’t an insult simply because of decaying public services. It’s an insult because it ignores the people who suffered because of that decay. Stormont’s closure has “exacerbated”, the north’s “shocking” suicide rates. They’re much higher for both men and women than anywhere else in Ireland or the UK.

Additionally, women’s rights have suffered as legislation to protect against coercive control doesn’t apply here. And school budgets have decreased in real terms.

On 9 January, the tánaiste (Irish deputy prime minister) Simon Coveney and Smith announced a deal to get Stormont “up and running”. But no sooner had they made this announcement than trade union Unison highlighted Smith was actually “holding the people of Northern Ireland to ransom”. Smith threatened to withhold extra money for local workers when he said:

There is no money coming unless the executive gets up and running.

One quick-witted response to Unison’s statement highlighted another reality:

No change there then.

Tories have been holding the Northern Irish to ransom, since 1921.

Threatening the pay of health workers to pressure local parties into making a deal is worthy of contempt, not praise.

Since then there have been failed attempts to reopen it. And in the meantime, health workers, whose pay Smith threatened, had to take strike action to demand pay parity with workers in the UK. Additionally, legislation dating back to 1737 has banned Irish speakers from using their native language in court. This is all to become history.