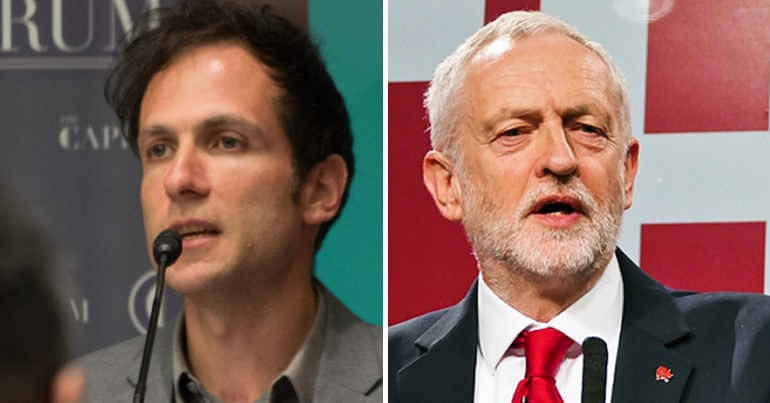 Smears about Labour Party leader Jeremy Corbyn have once again dominated mainstream media coverage this election. But as Jewish media activist and researcher Justin Schlosberg told The Canary recently, the evidence simply isn’t on the side of Corbyn’s detractors. And for him, the media’s reporting about this anti-Corbyn campaign has been “absolutely unacceptable”.

Schlosberg is a lecturer of Journalism and Media at Birkbeck College, University of London. And he co-authored the important 2019 book Bad News for Labour. Antisemitism, the Party and Public Belief with four other academics.

Just as his parents fought alongside Jews against fascists in the Battle of Cable Street… if in this country we were ever to face again the threat of the rise of far-right extremism on that scale, where there are pitched battles in the street, I am absolutely certain that Jeremy Corbyn will be on the frontline of those battles fighting alongside his Jewish comrades whilst people like Boris Johnson and Jo Swinson will be running for cover.

Indeed, Corbyn has a long and impressive record of fighting antisemitism which stretches back for many decades. And as Labour leader, he has taken strong action to stamp out the small amount of racism that exists in the party – a record which general secretary Jennie Formby recently laid out clearly. But he has faced consistent smears from right-wing opponents who have weaponised allegations of antisemitism to attack him.

Schlosberg’s personal contribution to Bad News for Labour focused on the 2018 media coverage of antisemitism allegations against the Labour Party. And as he explained, the issue “really dominated the headlines for the most intensive and prolonged period”, and the voices of “mainstream Jewish groups” and anti-Corbyn Labour politicians “very much dominated the headline coverage”.

As he tweeted on the eve of 2019’s general election:

Something incredibly poignant about a voice so maligned and excluded finding its way on to the airwaves. A Jewish Zionist tells LBC

'I would happily fight for Israel and die for Israel but what I won't do is lie for Israel. And calling Corbyn antisemitic is simply a lie' pic.twitter.com/pbQVfoINQc

‘The evidence is clear’

Speaking on the basis of his research, Schlosberg said:

I know for a fact, and the evidence… exclusively bears this out, that the [Labour] Party is not antisemitic, in the sense that there is no evidence to support such an absolute and total analysis of the problem of antisemitism within Labour – which clearly does exist. It exists in all major parties. We’ve seen just within the last week examples exposed amongst Tory party candidates who have shared what are unequivocally antisemitic messages on Facebook in the past. This is a problem in all major parties in all of society.

But the notion that the Labour Party is institutionally antisemitic, is overrun with antisemitism, or that Jeremy Corbyn himself is either antisemitic or in any way complicit or supportive of the very rare instances of actual antisemitism in the party, is just not true. There is no evidence to support that, and there is overwhelming evidence to suggest that the vast majority of Labour members are fundamentally anti-racist, that Jeremy Corbyn has spent his entire life and political career standing shoulder to shoulder with Jewish communities, from leading the fight for Jewish causes both within parliament, within his constituency, and beyond.

Mainstream journalists failed to challenge the anti-Corbyn propaganda, so academics had to step in

Talking in particular about the media’s response (or lack thereof) to Bad News for Labour, Schlosberg stressed that a:

serious problem with journalism today is just an absolute failure of accontability and self-reflection that actually very few journalists… who write for broadsheet newspapers or report for national broadcasters are prepared to engage with this kind of critical research and evidence, and to respond to it meaningfully and productively. And that’s all the more problematic because the media see it as fundamental to their contribution to democratic life that people and institutions are answerable and accountable to the reporting that they do, but they surely must be just as amenable to answering and accounting for their own role sometimes in distorting and skewing public debate.

And I think that there is an absolute rotten failure to the core of our media system that’s reflected in the absolute failure of The Leveson Inquiry to implement real, fundamental change in the way that the media are regulated, the press in particular. The unwillingness of politicians across all parties to really engage substantively with issues to do with media reform and, most of all, the absolute resistence amongst journalists who really should know better – and I’m talking particularly about journalists at titles like the Guardian – to respond meaningfully to these kinds of critiques. It’s just absolutely unacceptable. They don’t have to agree with everything that we say, they don’t have to accept everything that we have to say. But they sould read it, they should think about it, and they should respond constructively, respectfully and meaningfully.

Allegations have been used as a political football to attack the left; and the mainstream media has enabled this

it’s very clear that the story has been hugely distorted throughout much of the press and mainstream media. … it’s very clear, even going back to the… earliest days of Jeremy Corbyn’s leadership of the Labour Party, that there has been an unprecedented, hostile reaction to him and the party stemming not just from the Tories but from the centre and right-wing factions within the Labour Party, from elements of the national security state, the military, and large swathes of the media.

He noted that “when a party that stands fundamentally for radical, progressive reform, that challenges the interests of concentrated wealth and power, this kind of ideological warfare is… to be expected”. But he added:

To critique concentrated power and its influence over the media in particular is not the same as engaging in conspiracy theories. If you understand the long tradition of the political economy critique of the media advanced by people like Noam Chomsky, amongst others, you understand that it has very little to do with conspiracy theory. It has very little to do with any attempt to portray powerful interests as intentionally, consciously, and secretly working to control the agenda. What it has to do fundamentally and above all else is with the media’s entrenchment in the market system. And I include the BBC here. Even though it is a publicly-owned public broadcaster, it is entrenched in the market system. And that produces certain effects in lots of different ways that ultimately privilege the existing economic, political, and social order and protect it against challenge, particularly from the left.

The billionaire press still has immense power, so a media revolution remains vital

In the 2017 election, Schlosberg said, independent commentators spoke of ‘the death of the billionaire press’. They suggested that the surge of Corbyn’s party that year was down to “the failure of the right-wing press in particular to control the agenda in the way that it once did”. But Schlosberg believed this analysis was “devoid of any substance”. Because even though some independent left-wing media outlets broke through in the election, they still only reached “a tiny fraction of the audience commanded by the likes of the Daily Mail, the Sun, as well as the Guardian and the Mirror Online, and certainly the BBC“. He simply pointed out that:

one of the things that did coincide with the dramatic shift in polling was that broadcasters who operate under special rules of impartiality during elections actually started to report on Labour’s policies which happened to be hugely popular with large swathes of the electorate. The other thing that happened is that the traditional, left-leaning titles like the Guardian and the Mirror – once the election was called – toned down some of their anti-Corbyn rhetoric that they had been pedalling in deference to the right-wing press for much of the preceeding three years.

we could just as easily ask ourselves the question of what that election result might have been were it not for the fact that the right-wing press ran atrocious and untrue headlines one after the other in the lead-up to the elections… If we actually had a fair and balanced and accurate press – would Labour have won a landslide in that election?

There’s some hope, though, he suggested. Because it’s true that billionaire-owned media outlets “still have a huge amount of influence… over broadcast agendas, … a deep reach into the public psyche, and are some of the most successful and biggest online news sources themselves”. But:

actually there are more opportunities to expose the disinformation and the misinformation that emanates from that press than there ever have been. And I am hopeful that that will be enough to at least give a sizable portion of the electorate a glimpse of that very common disconnect between the headlines and the reality.