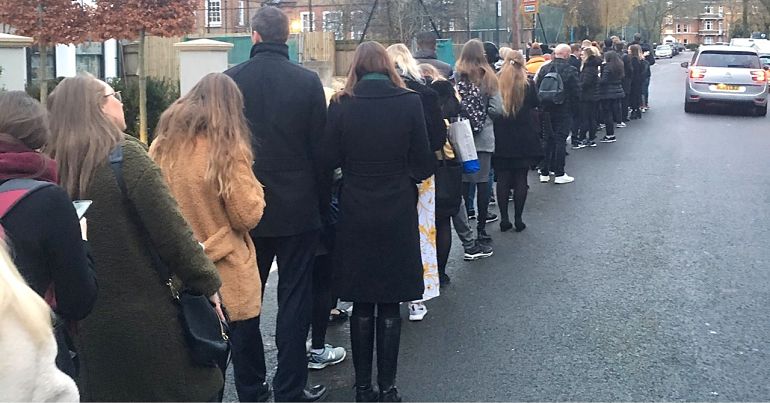 As Britain goes to the polls, people are reporting that queues are the longest they’ve ever seen.

In London, the Metro carried pictures of queues at polling stations across the capital. The images typically show dozens or even hundreds of people queuing. Most appear to be younger than average. Metro reported that some had described the queues as “full of young people”.

Kelly Molloy said it was “the biggest queue I’ve ever seen at my polling station!”:

The biggest queue I’ve ever seen at my polling station! Get out there and vote people! #GE2109 #iVoted #BeAVoter #clapham pic.twitter.com/BjXunRqbKe

The Mirror said the pattern was repeated in “other major cities”. It also suggested the reports of a high turnout would be “welcome evidence” for Labour Party strategists. The Mirror quoted voters saying it was the first time they’d had to queue at their local polling station. John Walsh from Cambridge was one such example:

That's the first time I've ever had to queue & wait outside of a polling station in order to exercise my right to vote here in #Cambridge (local or otherwise).
Hope it bodes well for a good #GE2019 turn out nationally on this rather dreary day. #GeneralElection19 #GeneralElection pic.twitter.com/UkbXn9TzS8

On Twitter, people used the hashtag #GE2019 to announce they’d voted, to encourage others to vote, or to say what they’d be getting up to on polling day. This included offering transport to polling stations or signposting information on how to cast a vote.

Polling stations remain open until 10pm, and anyone in a queue by then will still be able to vote.