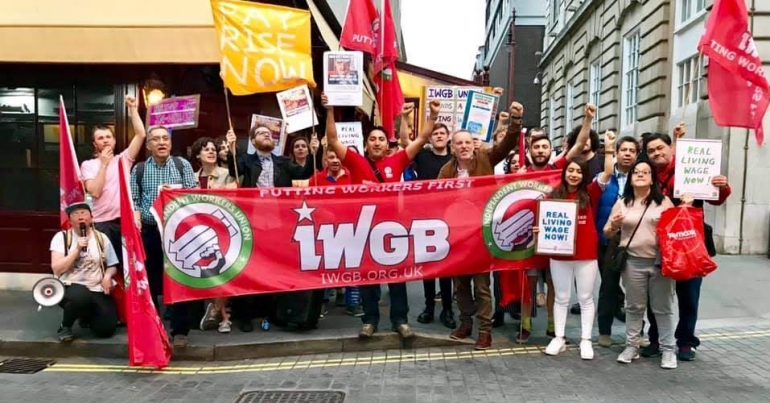 Workers from a private members club in London called off their planned strikes for 11 and 12 December after a successful round of negotiations with management.

Pro-Brexit campaigner Andrew Wigmore dubbed the Mayfair club “Brexit HQ” due to the number of pro-Brexit individuals present at the club. These include millionaires such as Richard Tice, Arron Banks, and Robin Birley – who owns 5 Hertford Street. Birley has donated over £250,000 to UKIP and £20,000 to Boris Johnson, according to the Times.

According to the Independent Workers Union of Great Britain (IWGB), which was backing the strike, the kitchen porters at the elite Mayfair club secured concessions from management which means they will have five days paid sick leave. Until now, management offered only statutory sick pay.

When the union announced the strike action, it said that the lack of “proper” sick pay meant “many of them are forced to work while they are ill, just to be able to pay their rent and keep the lights on”.

The club has also agreed to start paying workers the London Living Wage of £10.55 per hour by January 2020, following negotiations. Until June 2019, the workers were only paid £8.65 per hour, according to the IWGB.

Other demands of the workers which have yet to be met include recognition of their union.

The IWGB said it “welcomes” the improved terms agreed to, although “the offer still falls short of a decent contractual sick pay package and a proper collective bargaining agreement”. The union says that workers will, therefore, be seeking union recognition via arbitration.

In a prior statement to The Canary, on 6 December, 5 Hertford Street said:

Only 10 of our 250 members of staff are members of the IWGB, so it would be inappropriate for the club formally to recognise the union but as demonstrated during our recent discussions we are quite prepared to have a constructive relationship.