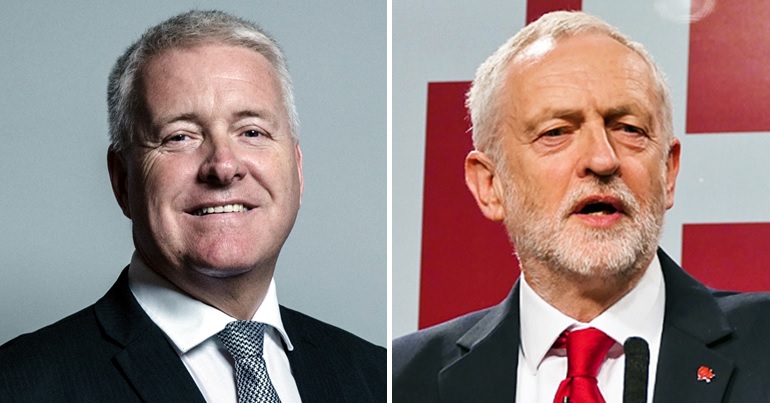 The chair of the Labour Party has a simple message for those still trying to blame leader Jeremy Corbyn for 2019’s disastrous election results. And it’s a message all progressives need to listen to very carefully.

“Ignore democracy at your peril”

My view was always so simple, ignore democracy at your peril ! The consequences would be grim!!

I’ve been sneered at, scorned,abused,harassed & spat at !

Let’s focus on those in need.

He had previously explained that “the only difference” between 2017’s successful Labour campaign and the disastrous 2019 election was that the party had shifted to backing a second referendum on Brexit. This, he stressed:

is the real issue within the Labour Party. It’s about a lack of trust. People feel disengaged. People feel let down.

Labour Party Chairman Ian Lavery says "the fact we went for a second referendum is the real issue in the Labour Party, it's about a lack of trust", when asked why the party suffered losses in #GE2019 https://t.co/C2EU1PGR52 #BBCelection pic.twitter.com/qqQv1yP2JJ

Labour’s compromise position on Brexit in 2019 may have seemed sensible and unifying, if risky. And it also helped to limit resistance from pro-Remain centrists. But with a media establishment firmly against Corbyn’s party, the message getting across to Brexit voters was clearly that Labour had copped out.

Labour elites failed to get Brexit

Tony Blair’s ‘New Labour‘ project left people across Britain with a lack of trust in politics. A sign of this was the massive fall in the party’s membership during this period. And Labour’s continuing obsession with centrist policies meant Jeremy Corbyn “inherited a wreck” back in 2015. It seemed in the 2017 election, however, that Corbyn’s leadership was rebuilding the party, despite constant media hostility. But Labour’s new stance on Brexit in the 2019 election clearly hit it hard.

When in power, Blair and his centrist allies faced accusations of being “unwilling to listen“, of ignoring members, and of distancing themselves from trade unions. In this way, journalist John Harris accused New Labour of ‘leaving a vacuum’ in many communities through its out-of-touch attitude and failure to truly address the desperation resulting from decades of industrial decay. This, he said, sparked a “working class revolt” in the form of the 2016 Brexit referendum. Brexit voters perceived overwhelmingly that living standards had been deteriorating for decades, and demanded that “decisions about the UK should be taken in the UK”.

‘Brexit was the big issue’

Blaming Corbyn and his politics for the 2019 election nightmare may be convenient for those on the right. But Labour’s Laura Smith was one of many politicians who lost to a Tory in a Brexit-voting northern constituency; and she has been crystal clear that Labour’s position on Brexit was the major factor:

It was Brexit that was the big issue here, followed by anti politics and politicians-you’re all the same and nothing ever changes. The idea Johnson was popular on the door is not my experience-get Brexit done was https://t.co/nHtShCxhVu

She also insisted that she “would have stuck to what we promised in 2017″ on respecting the Brexit vote, and that Labour now needs to rebuild trust:

This times a million. Lazy arguments won’t cut it. It’s time for some to look beyond Westminster and the Watford Gap. I will not blame voters. I will not blame individuals. I will not engage in negativity. I will focus on rebuilding trust in communities like my hometowns https://t.co/oL9QQt565q

Left-wing rising star Laura Pidcock was another person who lost out to a surging pro-Brexit vote in Leave-voting Durham North West.

felt like our democracy had been affronted by our failure to leave the EU.

[I have] never in my lifetime known any single individual so demonised and vilified, so grotesquely and so unfairly

While Brexit was clearly a key factor in handing the 2019 election to one of the most racist, hard-right governments in living memory, it would be wrong to ignore the effect of despicable anti-Corbyn propaganda in the media. Because it clearly shaped many people’s views on Corbyn’s party. So while rebuilding links with working-class communities around Britain clearly needs to be a priority for Labour post-2019, supporting a media revolution also needs to be right at the top of the party’s agenda.