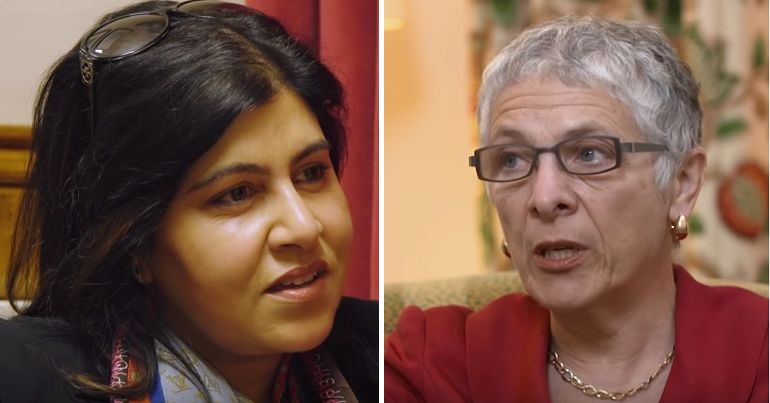 Ex-Conservative chair Sayeeda Warsi has condemned an article by Times columnist Melanie Phillips. Warsi urged Jewish people in Britain to join her in criticising the piece, which featured in the Jewish Chronicle. The former Tory chair said she was saddened by what she called the “bigotry” and “rank hypocrisy” in the article, asking where is the “solidarity”.

Islamophobia is a myth?

Warsi – who has been at the forefront of trying to get the Conservative Party to take action against Islamophobia in its own ranks – tweeted her response to Phillips and the Jewish Chronicle:

Saddened at the bigotry & rank hypocrisy in this piece
Hope British jews, of whom many have condemned Mel rants of the past, will condemn her & @JewishChron for the timing & nonsense in this piece @CST_UK @BoardofDeputies
Where is the #Solidarity ?😢https://t.co/KwBpvSJC5e

The article in question is headlined: Don’t fall for bogus claims of ‘Islamophobia’. In it, Phillips trashes the idea that Islamophobia is widespread or, indeed, even exists. She writes:

“Islamophobia” was invented by the Muslim Brotherhood to mimic antisemitism, the concept which these Islamists falsely believe immunises Jews from criticism — itself an antisemitic belief.

Islamophobia, which means anti-Muslim racism, wasn’t “invented” in the 20th Century. The use of that terminology may well have been but the prejudice was, for example, alive and kicking during the Crusades, in which Christians persecuted both Muslims and Jewish people. And that anti-Muslim racism predated the Muslim Brotherhood by about 900 years. Meanwhile, the prejudice is an increasingly big problem in Britain today. 47% of all religious hate crimes offences recorded by the police in 2018/19 targeted Muslims.

Phillips does concede that people should condemn “true prejudice against Muslims” but clearly, in her mind, ‘Islamophobia’ doesn’t fit the bill of actual prejudice.

Furthermore, she argues that this belief in “bogus” Islamophobia is one of the reasons why people don’t “grasp the full dimensions” of the “onslaught” of prejudice faced by Jewish people in Britain. That onslaught is also sadly evident, with 18% of all religious hate crimes recorded by the police in 2018/19 targeting Jewish people.

Clearly, both prejudices, antisemitism and Islamophobia, exist in Britain. And people should condemn and stamp out both. But Phillips effectively argues that, not only does one of them not really exist, but people’s belief in it is undermining acceptance of the true scale of the other.

Meanwhile, her evidence for the scale of antisemitism in the UK rests on the notion that criticism of Israel is antisemitic in itself. She asserts that the distinction between “loathsome prejudice against Jews” and “Israel-bashing” is “bogus”. Phillips brands Palestinians who are suffering under the Israeli military occupation and “Muslim society in general” as ‘Jew-haters’ within this logic.

Everyone, not just Warsi, should be “saddened” by Phillips’ article and the Jewish Chronicle‘s decision to publish it. Because it’s a grim statement on where public discourse in the UK currently is. She’s essentially arguing that people have to pick a side: you’re either with Jewish people or with Muslims. You’re either with the Palestinians or with Jewish people, who she uses as shorthand for the Israeli state (in itself an antisemitic trope).

Warsi asks ‘where is the solidarity’? It’s certainly not present in Phillips’ article. But it is seen across Britain among the millions of people who refuse to be divided in this way. People who will stand together with people of all faiths and none against violence, discrimination, and oppression.