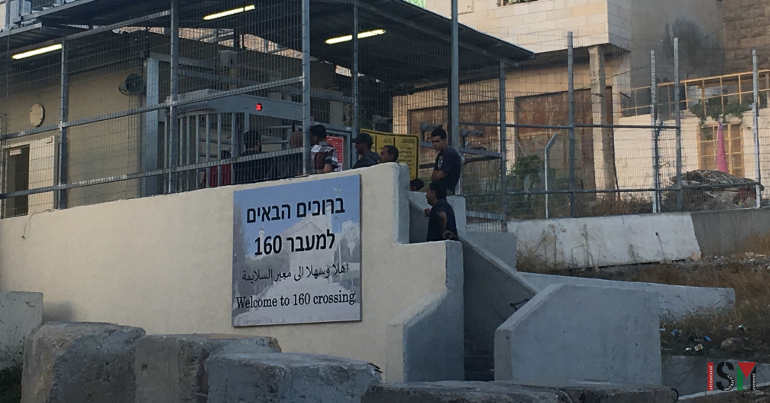 This week, the Israeli military fired live ammunition, tear gas, and concussion grenades at children in Hebron as they walked to school. This one incident is shocking. And even taken on its own, it should lead us to condemn the UK government’s policy of continuing to arm Israel. But as one activist told The Canary, this incident is part of an ongoing pattern of Israeli army violence against children in the occupied apartheid city.

And this was nothing new. On 22 September, for example:

A 16-year-old student was injured:

A 16 year old student was wounded after being hit in the stomach with a tear gas canister in the attack, caught on film by an ISM activist. In the video, an Israeli soldier can be seen celebrating after firing tear gas at children walking home from school.https://t.co/ngM3Y6KDFW

During 2018, I spent three months in occupied Palestine as part of the Palestinian-led International Solidarity Movement. During my time there, I saw children hit with live ammunition and hospitalised. I also saw children being blindfolded and detained at a military base.

I stood at the Sulaymeh checkpoint – the same Israeli checkpoint where the boy was injured in September – as Israeli soldiers fired gas and grenades at kids walking to school. A small child had thrown a tiny stone, a pebble really, at the heavily-armed soldiers who were standing inside the checkpoint’s mesh cage.

The Palestinian city of Hebron is in the south of the West Bank. The Israeli military occupied the West Bank in 1967, and in 1968 the Israeli state began supporting the colonisation of the city by armed Israeli-Jewish citizens. The Hebron colonisers have been motivated by religious fundamentalism, and the result has been extreme violence against the Palestinian residents of the city.

In 1994, a US-Israeli terrorist carried out a massacre of 29 Palestinians in Hebron’s Ibrahimi mosque.

Because of the presence of Israeli colonies in the city centre of Hebron, the Israeli military refused to pull out of the centre during the 1990s. Instead, the Hebron Agreement divided the city centre into two areas, known as H1 and H2.

The H2 area remains under the control of the Israeli military. Now, “about 34,000 Palestinians and 700 settlers” live there. According to Israeli human rights group B’Tselem:

Israeli authorities impose a regime intentionally and openly based on the “principle of separation”, the result of which is legal and physical segregation between the Israeli settlers and the Palestinian residents.

Palestinians living in the area are subjected to extreme restrictions on their movement by car or on foot – including the closure of main streets – while settlers are free to go where they wish. In addition, the military has issued shutdown orders to hundreds of stores and commercial establishments in the area.

The Canary spoke to Philippa Laburnum, who recently returned from working as a volunteer in Hebron with the International Solidarity Movement (ISM). She explained:

Our main task [In Hebron] is trying to reduce the violence against Palestinian schoolchildren who are going to school within the H2 area of Hebron, which experiences a lot of violence from the Israeli soldiers that are there (there are 4,000 Israeli soldiers within the area).

The kids inside that area often have to pass through Israeli checkpoints.

There are 21 permanent Israeli checkpoints within Hebron.

We are present at checkpoints where there is sometimes violence against children by Israeli soldiers or border police – for example, the use of tear gas, rubber coated steel bullets or stun grenades against the children. At other times, the soldiers close the checkpoints for no reason, or they delay children or teachers from getting through the checkpoints.

The reason ISM activists are there is to try and reduce the likelihood of these things happening, and to just try to make it safer for children to go to school.

The army and settlers, however, harass international volunteers monitoring checkpoints in Hebron. According to Laburnum:

Usually we’d experience harassment from settlers while we were standing [at the checkpoint], or on the way. This might be verbal abuse, sometimes physical violence.

There would also often be harassment from soldiers: verbal harassment, making fun of us, checking our passports, or otherwise trying to disrupt our day and make it difficult for us to stay there.

Laburnum also describes the daily violence against the Sulaymeh neighbourhood – the area where Israeli soldiers used live ammunition against Palestinian schoolchildren this week:

[The Sulaymeh neighbourhood] is next to a checkpoint into a restricted area. This Palestinian neighbourhood experiences a lot of violent repression from Israeli soldiers. Often when we’d arrive at 11.30am or 12pm the kids would be leaving school. The soldiers would come out of the checkpoint and tear-gas them.

It was probably every other day… On an average day when this happens, the soldiers would come out, the children would run away – run back and run away. The soldiers would throw maybe six or seven tear gas [canisters], a couple of stun grenades…

We once saw a boy aged 7 hit in the leg by a stun grenade as he was running away… outside his school. Stun grenades are very scary, loud and intense if they go off near you… It was a very traumatic experience for him.

The British government has consistently sold weapons to the Israeli state. This is in spite of the ample evidence of Israel’s continuing war crimes against Palestinians. According to Campaign Against Arms Trade:

Between 2014 and 2018, the UK issued individual licenses for £364 million worth of military equipment and technology for export to Israel, as well as 20 open licenses, allowing unlimited deliveries over a 3-5 year period.

In 2018, British arms sales to Israel reached a record level. This was despite the ongoing massacres of unarmed Palestinian protesters by Israeli snipers at the barrier which separates Israel from the Gaza Strip. 180 Palestinians were fatally shot during the Great Return March protests in 2018, including 35 children.

The daily violence against schoolchildren in Hebron is only one tiny part of the routine violence carried out by the Israeli military and police against Palestinians. For that reason, we need to take heed of the Palestinian call for solidarity, and force the British government to stop the sale of arms to Israel.

Featured image via the International Solidarity Movement (with permission)