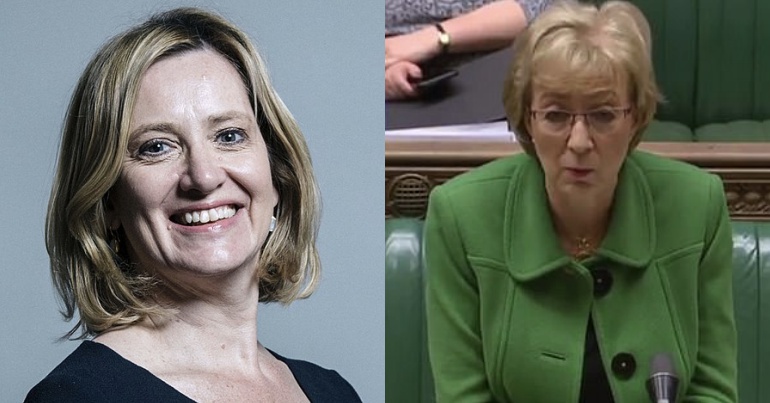 It took just 24 hours for the lid to truly came off and reveal the full extent of racism in the Conservative Party. Conservative MPs, including cabinet ministers and an entire government department made a series of racist comments. Some passed these off as ‘gaffes’ or errors. But they reveal a dangerous pattern of racism in the party.

On 7 March, Amber Rudd got the ball rolling when she referred to Labour’s Diane Abbott as “a coloured woman” live on BBC Radio 2‘s Jeremy Vine Show.

Rudd later apologised saying, she was “mortified at my clumsy language”. But as Abbott said, Rudd used “outdated”, “offensive” language and a “revealing choice of words”.

Rudd’s work as the boss of the Department for Work and Pensions shows a similar lack of compassion and outdated views:

Amber Rudd undermining an important point about online abuse by referring to Diane Abbott as a “coloured woman” on @BBCRadio2. She clearly gets her language from the same bygone era as her abhorrent welfare policies.

And many people pointed out that as home secretary, Rudd was also the architect of increasingly hostile and violent immigration policies:

It didn’t stop there…

The Muslim Council of Britain (MCB) has repeatedly asked the government to investigate Islamophobia in the Conservative Party. On 7 March, Labour MP Naz Shah called on Andrea Leadsom to call a debate, “given the scale of it”.

Leadsom claimed the Conservative response has been “extremely robust”. Yet she also told Shah to: “Seek an adjournment debate” and discuss the issue “with Foreign Office ministers”.

I asked @andrealeadsom to call a debate on #Islamophobia given the scale of it in @Conservatives Party & following the @APPGBritMuslims report & definition. She said : speak to foreign office ministers about Islamophobia.When did attacks on BRITISH Muslims become a foreign issue? pic.twitter.com/idhfQEUKpK

On 7 March, Shah wrote to Theresa May stating that Leadsom:

played into the idea that Muslims born in our country are “foreigners” or somehow less British than the rest of us… This comment exposes a profound ignorance of race issues at the top of government.

My Letter to @theresa_may on #Islamophobia a foreign office issue.

Alluding to British Muslims as foreigners is not a trivial matter.

“Rather than seeking to make excuses, the right thing for Andrea Leadsom to do is wholeheartedly apologise and grant this debate.” pic.twitter.com/cBlD9lA7EI

Says a lot about the degree of racism in the Tory party that Andrea Leadsom saying BRITISH Muslims should consult the FOREIGN office to discuss concerns about Tory Islamophobia is not the most racist thing a Tory MP has said today. #AmberRudd

Just WHAT will it take for institutional prejudice in the Tory party to be taken seriously? pic.twitter.com/jIiFlCVS0D

Wwwwwhhhhhhaaaaaatttttt? @andrealeadsom
British Muslims are errrrr British 🤦🏽‍♀️
What is wrong with some of my colleagues🤷🏽‍♀️
We are in a hole …..stop digging! https://t.co/d708fH9BQ0

This is a crucial issue, not least because Islamophobic hate crimes in London alone rose over 31% in 2017/18.

Later that day, the Foreign and Commonwealth Office (FCO) was forced to remove a series of job vacancies posted under the tagline “Fancy an African Adventure?”

As Buzzfeed reported, an FCO employee said this:

Harks back to colonial-era fantasies of a temporary tropical getaway as a character-building career boost.

Many people expressed concerns about the advert:

“An #African Adventure..to Rape and Pillage #Africa 2.0?!” This is what you get when your civil service is a near monoculture and is literally colour blind to anyone who is not white. Very fertile ground for institutionalised ignorance and #racism. https://t.co/sg2vmLnpS0

An 'African adventure'? Tories are still in the days of 'Darkest Africa'. #ToryRacism #GTTO https://t.co/Jdyum5ANMC

After @DavidLammy vs. @StaceyDooley – the Foreign and Commonwealth Office is advertising a job: "Fancy an African Adventure?". Yeah – sure, we don't have a racism problem. https://t.co/EVhf6916TD pic.twitter.com/62MGK64dnw

On 7 March, the Guardian also reported that Conservative party chair Brandon Lewis is:

Accused of ignoring repeated pleas by Tory members to investigate alleged racist and Islamophobic incidents, including a claim that a white senior party official referred to an Asian councillor as an orangutan.

Baroness Sayeeda Warsi has been leading the call to investigate Islamophobia and all forms of racism in the Conservative Party for some time. On 7 March, she highlighted Islamophobia in the party in a series of tweets:

I have published daily examples of racism &Islamophobia w/n @Conservatives -our Daily Detox. It’s wearing &embarrassing, bt if that’s the only way 2ensure the party which was a home of choice 4 this working-class Muslim remains so 4 future Brit Muslims, then it’s worth fighting https://t.co/ggDOH9e2lT

This is how bad the problem is @sajidjavid
When you present as of “Muslim heritage only” and make clear that Islam is not practised by you or in your home and yet you are still considered “too Muslim” for these bigots.
A lesson – Stop feeding the beast of bigotry 😢 https://t.co/TAnzMFLZXC

With so much blatant Conservative racism on show, even the BBC‘s Laura Kuenssberg tweeted:

Although her language was criticised:

Why is it always a gaffe or an own goal when it's the Tories, but systemic and institutional when it's Labour? Consistent narrative would be nice, no wonder OFCOM are investigating…not that the BBC are reporting that…

It wasn’t difficult to join up the dots:

48 hours in the Conservative Party

Yet on 8 March, James Cleverly, deputy Conservative Party chair, excused all this saying, “we all make mistakes”, claiming the comments were just a “slip of the tongue”.

But these are not “mistakes”, “own goals” or gaffes. This is out-and-out racism. Its consequences destroy lives. Enough is enough.