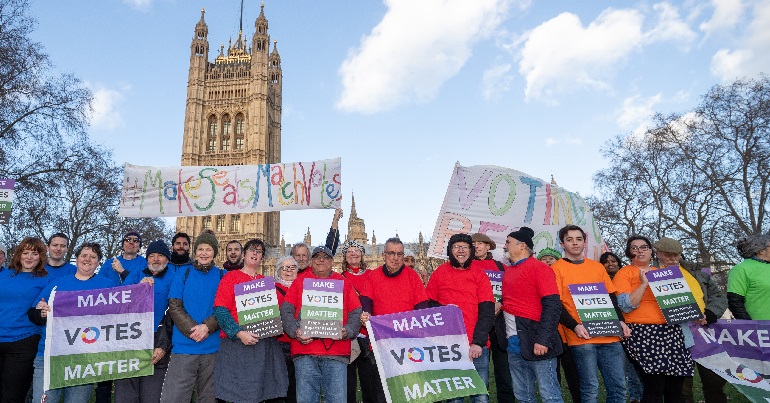 A new poll shows that 76% of Labour Party members now believe the party should back calls for a more proportional electoral system. Only 12% disagreed.

Britain’s current voting system is ‘First Past the Post’ (FPTP). This election saw the Conservatives get around 43% of votes but about 56% of all MPs. Labour (and other parties), meanwhile, would have won more seats in a more proportional system. In fact, as Joe Sousek from the Labour Campaign for Electoral Reform pointed out:

In 19 out of the last 20 general elections, most people have voted for parties to the left of the Conservatives. Yet the Tories have been in power for 63% of this time – and this will climb to 66% if they see out their new term in full. It’s time for Labour to recognise that First Past the Post has done nothing to create an equal society.

“We need to commit 100% to electoral reform”

Make Votes Matter (MVM) campaigns for a system of Proportional Representation (PR) in UK general elections. This means “any voting system in which the share of seats a party wins matches the share of votes it receives”. MVM commissioned the poll of Labour members.

Most people voted for parties to the left of the Conservatives on Thursday – so with Proportional Representation we’d most likely have a coalition of progressive parties steering us away from austerity and a hard Brexit cliff edge.

Instead, we’ve ended up with probably the most right wing government this country has ever seen, elected by a minority of voters, with devastating consequences for the most vulnerable in our society. Most Labour members have understood this danger for some time, and it’s absurd that we as a party still haven’t backed a fair system. We need to commit 100% to electoral reform at next year’s Labour conference, and we have to make sure this can never happen again.

Most Labour candidates already supported PR before the 2019 election.

MVM co-founder Klina Jordan previously spoke to The Canary about PR. She said there’s significant evidence that the system is fairer for voters (and parties). It also “results in better social, environmental, and economic outcomes”. Countries with such a voting system, meanwhile, tend to be more equal societies with better representation of minority communities. And it even results in less war.

A report from earlier in 2019 that MVM co-authored also stressed that the FPTP electoral system has “a pronounced conservative bias”. And the report’s author explained that it “consistently skews politics to the right and drives up economic and social inequality”. In “countries with more proportional systems”, meanwhile, the report insisted that there are more “egalitarian, compassionate” outcomes.

FPTP is leaving voters “out in the cold”

On 14 December, MVM staged a protest in London. This highlighted the problems with Britain’s current electoral system. And as Jordan insisted:

The quirks of our outdated voting system mean that Parliament won’t accurately represent how people voted, which is desperately damaging to our democracy because the last time one party had a majority of support from the people was in 1931.

If you want to put a stop to unfair votes and finally make votes matter, support the growing demand for Proportional Representation by signing our petition to #ChangeTheVotingSystem! …

Millions of people face the prospect of being left out in the cold when it comes to being represented in Parliament; that’s because we need a proportional system where seats match votes, and all votes must count equally

The above petition already has more than 50,000 signatures.