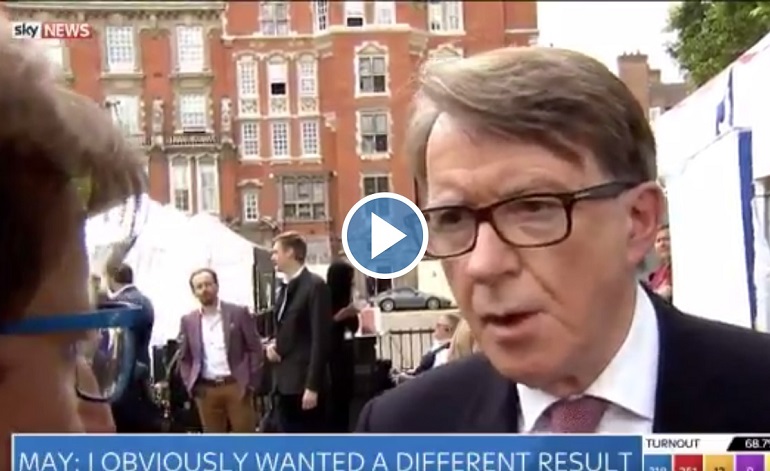 The Labour surge in the 8 June election clearly shocked Jeremy Corbyn’s detractors in the party. And it left a number of them eating humble pie. Perhaps none more satisfyingly than Peter Mandelson, who once said “I work every single day to bring forward the end of his [Corbyn’s] tenure in office”.

Speaking to the BBC, Mandelson conceded:

I was wrong [about Corbyn]. I am very surprised, an earthquake has happened in British politics and I did not foresee it.

I was clearly wrong in feeling that Jeremy wouldn’t be able to do this well. And I think he’s proved me wrong and lots of people wrong and I take my hat off [to him]…

A number of other Labour figures have made similar statements.

From people like Mandelson, who have long patronised both Corbyn and his supporters, these statements are a rare act of humility. And they should be welcomed with open arms. But now, the question for Corbyn’s Labour Party is how to take such admissions of error and move forward.

Remember: Labour surged in spite of these people

When asked on Sky if he’d been wrong to try and undermine Corbyn, Mandelson said “well, no”. So there’s still clearly a long way to go to convince Corbyn’s detractors that they need to give him their full support. Especially when we consider the number of figures who have doubted Corbyn since he became leader:

These are the times senior Labour figures and MPs said @JeremyCorbyn​ was a bad leader pic.twitter.com/regeMKBzf2

But there was a small sign of forward movement from Mandelson. When asked if Corbyn might have done better with the backing of those in Labour who didn’t fully agree with him, Mandelson admitted:

This odious man who did so much undermine Labour says he wasn't wrong to sabotage Corbyn. Shameless pic.twitter.com/9j003aEwbl

And he probably would have. Because the Labour surge on 8 June was not only in spite of widespread media hostility, but also in spite of the Labour MPs who openly rebelled against him in 2016. The Labour coup severely damaged the image of the party, even if it strengthened Corbyn’s mandate in the process. And that was a difficult image to overcome.

But in spite of all this, Corbyn managed to re-energise Labour in a way unseen since 1945:

The right wing of the Labour Party now appears to have accepted (with a heavy heart) that times have changed and that, as ITV‘s Robert Peston said just before the election:

Scathing……….. 71 seconds you really do not want to miss. Many of you have waited your whole life for this. pic.twitter.com/b3Jg5RkBUh

If Labour can now unite around Corbyn’s achievements, and build on the movement that played a central role in those achievements, this could be the start of a real, lasting shift in British politics.