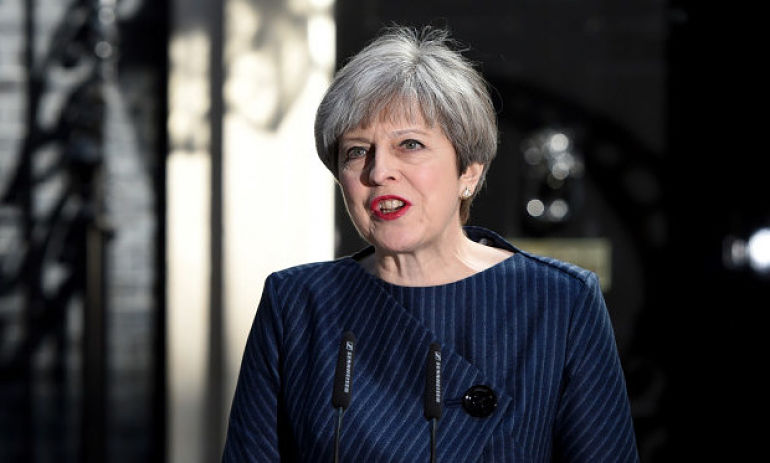 Conservative Party leader Theresa May could well have made the most serious mistake of her political career. Namely, her decision to seek the support of the terrorist-backed Democratic Unionist Party (DUP) of Northern Ireland to help form a government at Westminster.

A ‘confidence and supply’ deal is yet to be fully worked out, but could still end “in tears”, as Sinn Fein’s Gerry Adams put it.

The DUP has a long history of association with terrorists and paramilitaries. DUP founder Ian Paisley set up the unionist militia, Third Force. And in 1986 DUP co-founder Peter Robinson led hundreds of members of the Third Force in an “invasion” of the small village of Clontibret in County Monaghan, across the border. In that same year, in November, Paisley and Robinson addressed a rally for the paramilitary group Ulster Resistance in Ulster Hall.

In 2009, DUP MP Willie McCrea was challenged about his links to the Ulster Volunteer Force (UVF) leader Billie Wright in 1991 and 1992, at the height of a sectarian murder campaign in Mid-Ulster.

Nor should we ignore that during ‘The Troubles’ collusion between Loyalist paramilitaries and British armed forces, in particular the secretive Force Research Unit (FRU) was rife. Reports claim that 13-14 innocent civilians died as a result of FRU/UDA collusion with paramilitary forces. Also, reports say that a staggeringly high percentage [p4] of Loyalist paramilitaries were British intelligence assets.

Many alleged loyalist paramilitaries went on to become members of the DUP. And it is noteworthy that the Loyalist Communities Council (LCC), which represents the UDA, the UVF and the Red Hand Commando, issued a statement shortly before the 2017 General Election. That statement urged voters to back DUP and Ulster Unionist candidates in four battleground constituencies.

Also, on 28 May 2017, Colin Horner was shot dead in a Sainsbury’s car park, in front of his three-year-old son. Police are investigating whether the murder is linked to a UDA feud. But only forty-eight hours later, DUP leader Arlene Foster met up with UDA boss Jackie McDonald.

But past and recent links with paramilitary groups is not the DUP’s only concern.

Leading up to the 2016 EU referendum, the DUP was donated £435,000. The money was for pro-Brexit advertising. But not in Northern Ireland. Instead, it was spent across Britain, including £282,000 for a ‘wraparound’ advert in The Metro. The Metro is a free paper in several UK cities. It is not, however, available in Northern Ireland.

The man who fronted the donation is alleged to have had links to the Saudi Arabian intelligence service. Richard Cook, chair of the Constitutional Research Council, founded a company, Five Star Investment Management, in 2013 with Prince Nawwaf bin Abdulaziz Al Saud, a former director general of the Saudi Arabian intelligence agency and the father of Saudi ambassador to the UK. Cook is also a former Scottish Conservative vice-chairman. The chief economist of Saudi Arabia’s largest bank argued the result of the vote was good news for Saudi Arabia.

And there is also the Renewable Heat Incentive scandal, that led to the abandonment of power sharing in Northern Ireland.

The Northern Ireland Good Friday agreement relies on Westminster avoiding taking sides in the politics of the province. But in doing so now, the Tories threaten the entire peace process:

“It could undermine all that we’ve achieved over the last several decades in NI” – Jonathan Powell says relying on DUP support is a mistake pic.twitter.com/otgUAMR8BS

The 2017 general election was a disaster for the Tories, which lost its majority in the Commons, despite all the lies printed about Labour in the Tory press.

May miscalculated big time. Her party is now weakened and so can no longer claim to have a strong mandate for the Brexit negotiations. And by choosing to depend on the support of the DUP, May is merely digging herself into an ever-deeper hole.

Politically, her days are clearly numbered. And Labour leader Jeremy Corbyn now plans to use the upcoming Queen’s Speech to try and topple May. It’s not over yet.