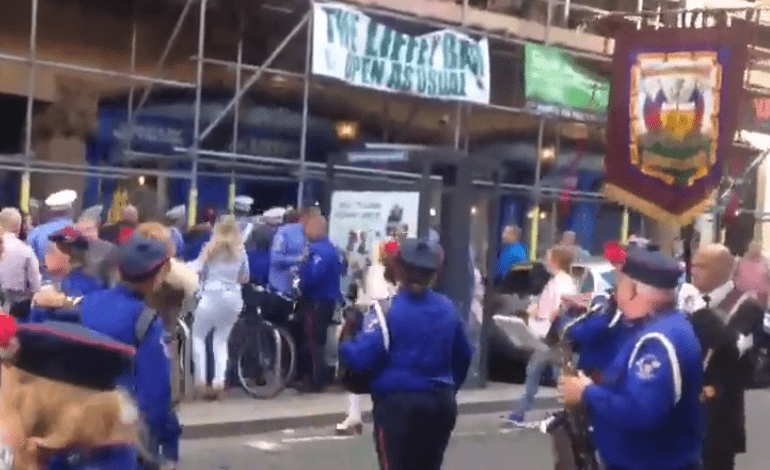 On 10 June, a riot broke out at a unionist Protestant march in Liverpool city centre. The violence shows just how chaotic Theresa May’s attempted informal coalition with the extremist DUP really is.

In Liverpool visiting friends, Beth Redmond videoed the fights breaking out in and outside an Irish pub, from the sidelines. Redmond told The Independent that she saw about 20 people fighting and said the brawls got “quite violent”.

Although, of course, not everyone in attendance behaved this way. Richmond said people on “both sides of the fight” were trying to hold people back. Police later broke up the fights and arrested two people.

After losing her majority, May is hoping to cling to power through a ‘confidence and supply’ deal between the Conservatives and the anti-abortion DUP. Loyalist supporters told the Liverpool Echo that the march was nothing to do with the proposed arrangement. But the Loyal Orange Liverpool Lodge calendar shows that a march was not actually planned in Liverpool for 10 June. That suggests the march may have been in celebration of the prospect of a dramatic increase in loyalist power in the UK government. Areas like Ulster are now likely to receive disproportionate financial aid as part of the parliamentary deal.

I think the problem now is that the peace process is likely to be sacrificed in order to save Theresa May’s skin. And that’s a terrible business, because we’ve gone through 20 years now of bringing peace and stability and prosperity to Northern Ireland. All that, in my view, is now being jeopardised by this deal.

Murphy’s position seems to be the consensus from politicians in Northern Ireland. The sitting Prime Minister’s deal will lose the confidence of the nationalists.

People also reported that some marchers in Liverpool carried Ulster Volunteer Force flags – a loyalist paramilitary group. The DUP has been backed by a variety of militant loyalist groups, classified as terrorists by the UK government.

This is not the platform the Conservative leader ran on. May stood for election with a campaign based on avoiding a “coalition of chaos” and bringing about a “strong and stable” government. Ironically, she has delivered the opposite. May is now the leader propped up by a coalition of chaos, while the election has delivered a strong and stable opposition. Jeremy Corbyn’s stunning electoral performance has united his party behind him. And the Corbyn surge isn’t letting up, with a post-election poll placing Labour 6 points ahead of the Conservatives.

By contrast, May’s grip on power is slipping by the minute. Nearly 700,000 people have signed the leading petition in protest against the DUP parliamentary deal. The riot in Liverpool shows just how chaotic such a coalition could turn.