A BBC editor declares the end of the tabloid media, which is now going into meltdown [TWEETS] - Canary 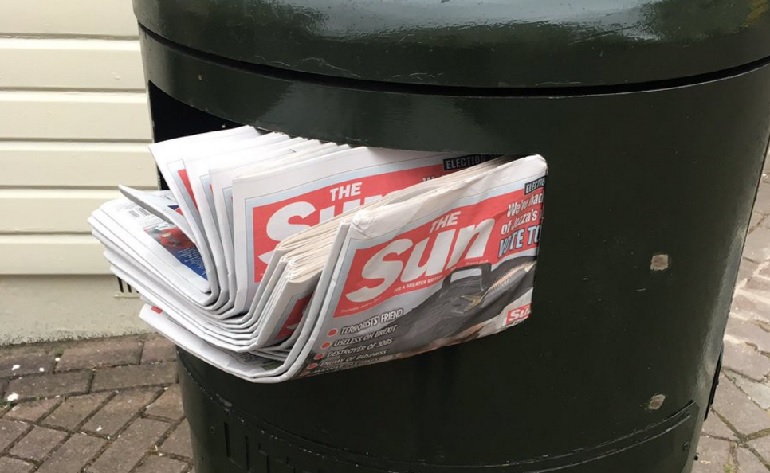 A BBC editor has declared the end of the tabloid media as a power-broker in British politics. And said media is now essentially proving his point, by going into meltdown.

They’re losing power, and they know it

I suspect we've seen the end of the tabloids as arbiters of UK politics. Sun, Mail & Express threw all they had into backing May, & failed.

The election left Labour leader Jeremy Corbyn in a much stronger position, and Conservative leader Theresa May in a much weaker one. And that, as Simpson points out, was in spite of strong corporate media bias against Corbyn, and in favour of May.

Award-winning director Ken Loach agrees with Simpson. He said late on 8 June that Labour gains represented a “triumph against the media presentation” of Jeremy Corbyn.

May’s allies in the corporate media soon accepted that her election gamble had failed (in spite of their full backing). But that didn’t mean they were happy about it:

Indeed, having thrown everything they had at stopping Corbyn from gaining on May, the election results strongly suggest that corporate media outlets are losing their influence over British politics.

But far from changing their ways, these rags have immediately shown their hypocrisy in the wake of the election.

Gutter rags with no integrity

The Sun made many attempts before the vote to smear Corbyn as a terrorist sympathiser. The Mail did the same. Even though, as The Canary reported, the claims were baseless. These were the acts of powerful organisations going into meltdown. With no reasonable arguments against Jeremy Corbyn, all they could do was shout the word ‘terrorist’ at British voters in the hope that it would scare them into voting for Theresa May.

But post-election, with May herself trying to enter into a parliamentary deal with a party backed by terrorists, the relative silence of these corporate media outlets spoke volumes. Although terrorism appears to be their favourite subject to talk about, they could only mutter soft words about Northern Ireland’s Democratic Unionist Party (DUP). A party with “strong historical links with Loyalist paramilitary groups” like terrorist group Ulster Resistance.

The Mail mentioned in one video that “the terrorist group Ulster Resistance was founded by a collection of people who went on to be DUP politicians”. But it passed no judgement on that fact. And it expressed none of the outrage that it has consistently directed at Corbyn for his non-existent support for extremists.

The Sun, meanwhile, said the DUP had “been criticised in the past for their links to members of violent loyalist paramilitary groups like the UVF who murdered Republicans during the Troubles”. But it didn’t use the word terrorism. And like The Mail, it simply tried to skip over the fact as if it was a minor detail. Totally different, then, from its consistently hysterical reactions to non-stories about Corbyn. As one comment read below The Sun‘s article:

As the election results suggest, these gutter rags no longer have the same sway they had over voters in previous elections. People are waking up to their naked corporate bias and highly evident hypocrisy. And as a result, their previous role as power-brokers in British politics is fading away.

That can only be a good thing for our democracy.