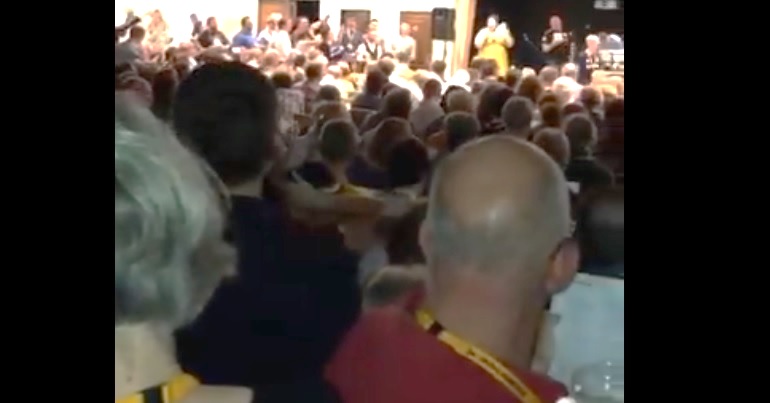 On 16 September, Financial Times political editor George Parker shared video footage of a Liberal Democrat conference social event. In it, attendees sing that a former prime minister “can fuck off and die”. Now, just imagine the media uproar if something like this came from a Labour event rather than a Lib Dem one.

The violent tone of politics today

Media pundits and politicians have said a lot about the tone of political debate in recent years. Because we live in a country where papers like the Daily Mail have referred to at least one MP as a “traitor” and called judges “enemies of the people”. It and other right-wing rags have used this kind of language consistently. Indeed, just days after the 2016 murder of Labour MP Jo Cox (whose killer said “death to traitors” in court), the Mail called for Labour to “kill” its leader Jeremy Corbyn.

Current PM Boris Johnson, meanwhile, has suggested that attempts to stop a no-deal Brexit mean “surrender”. And his allies in the hard-right media have echoed this warlike terminology. So by calling for a former PM to “die”, the Lib Dems are hardly helping:

Where’s Chuka? Lib Dems at their traditional Glee Club knees up with a popular ditty in which Tony Blair is told to “f*** off and die” pic.twitter.com/l0bDGoXqDC

Here's the progressive & very liberal @LibDems singing "Tony Blair can f*ck off & die” at the #LibDemConference.

If @UKLabour were to sing "Jo Swinson can f*ck off & die" at their conference, it would be on every front page & lead every @BBCNews show.pic.twitter.com/Dk0WjW3YWo

Ex-PM Tony Blair, of course, oversaw Britain’s participation in the devastating 2003 invasion of Iraq. In 2016, Labour leader Jeremy Corbyn called the invasion “an act of military aggression launched on a false pretext”. And he said numerous colleagues had been:

misled by a small number of leading figures [i.e. Blair] who were committed to joining the United States invasion of Iraq come what may, and were none too scrupulous about how they made the case for war.

Around the time of the invasion, Corbyn predicted the disaster it would cause and actively campaigned against it. He later insisted that the conflict had been “a stain on our party and our country”, and that those responsible “must face up to the consequences of their actions”.

The illegal invasion sparked mass devastation, helping to unleash a wave of terror around the world that we still see today. And for that reason, many British voters believe Blair “should be tried as a war criminal”.

‘Imagine all the people, living life in peace’

If Corbyn supporters had called for Blair or anyone else to “die”, however, there would be media uproar – even though Corbyn has consistently stressed “I don’t do personal” and “I don’t do abuse”:

“I don’t get involved in personal abuse..the issues are too serious”…

Corbyn has famously won numerous peace prizes. Yet the media and parliament have become safe spaces for anti-Corbyn abuse. Former PM David Cameron, for example, openly claimed the Labour leader was “Britain-hating” and called him and his anti-war colleagues “terrorist sympathisers”. The far right, meanwhile, has targeted Corbyn numerous times and expressed a desire to kill him.

But while other politicians push the tone of public debate to dangerously low levels, Corbyn stands tall as the adult in the room. That’s why he’s exactly the kind of leader Britain needs right now.