As Corbyn gets targeted by far right in Salford, people blame media smears against him - Canary 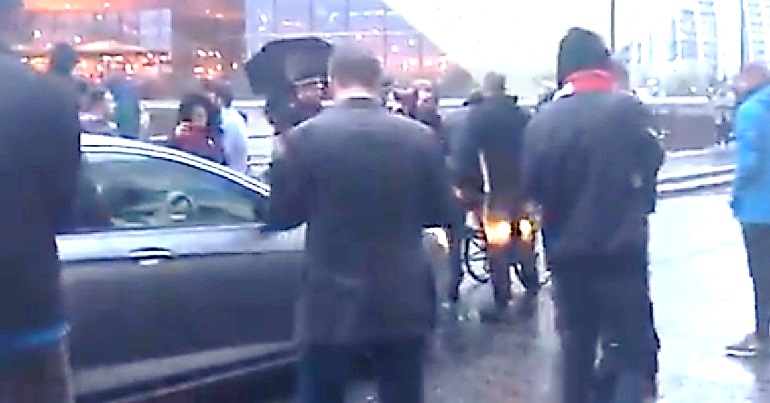 Britain’s media and political establishments have long been dogwhistling to the far right. And as the latter targeted Jeremy Corbyn this week, people held the former to account.

On 2 September, police arrested far-right agitator James Goddard outside a Corbyn rally in Salford. He and about 10 others blocked the Labour leader’s car for around five minutes. They shouted “Corbyn is a traitor” and “we love you Boris, we do”.

James Goddard begging not to be sent to prison is some sweet justice. pic.twitter.com/dHd1PuKRAD

In June, Goddard was convicted of assaulting a photojournalist. In July, meanwhile, he was banned from going near parliament for five years for harassing political figures in December and January.

Goddard is an associate of Stephen Yaxley-Lennon (aka ‘Tommy Robinson’). And like many on the far right, he holds anti-Muslim views. For example, he once said he wanted to “ban Islam from the west” and remove all Muslims from the UK.

Death to traitors, freedom for Britain.

The Daily Mail, meanwhile, has referred to at least one MP as a “traitor”. And it previously called judges “enemies of the people”. It and other right-wing rags have used this kind of language consistently, emboldening and radicalising the far right around the issue of Brexit.

Journalist Owen Jones is one of the people whom far-right agitators have targeted in recent months. And he’s very clear about the role the mainstream media has played in hyping up the far right:

In August, the National Union of Journalists expressed concerns about increasing far-right attacks on unsympathetic journalists. This came as several men attacked Jones. He later said people like the attackers “are being radicalised by mainstream politicians and a disturbingly large segment of the mainstream media”. Indeed, Brexit-supporting politicians have echoed Nazi propaganda and peddled racist language. And now, they’re driving British politics:

The fact that an MP's racist comments could result in a 375% increase in hate crime is chilling. The fact that this same MP is now the Prime Minister, is stomach-turning.
Boris Johnson's bigotry shames our country. He is not fit to sit in the House of Commons, let alone No 10. https://t.co/oXonq11eBf

After Goddard and co targeted Corbyn on 2 September, people again highlighted the role of right-wing smears:

This is a direct result of our media spending 4 years smearing a man who has won multiple peace awards & only wants a fairer society for all as a terrorist sympathising traitor to get out of paying their taxes.

The rise of the far right is on them.
pic.twitter.com/UPLgTxBzb7

A Brexit supporter previously assaulted Corbyn in March. The terrorist responsible for the anti-Muslim Finsbury Park attack in 2017, meanwhile, testified that he had wanted to kill Corbyn.

Corbyn has won numerous peace prizes, and police once arrested him for protesting against apartheid. But because he presents a challenge to the interests of political and economic elites, this establishment has used smears, deception, and barefaced incitement to attack him. Both the media and parliament have become safe spaces for anti-Corbyn abuse and dogwhistling to the far right. Former PM David Cameron, for example, openly claimed the Labour leader was “Britain-hating” and called him and his anti-war colleagues “terrorist sympathisers”.

The far right didn’t appear from a vacuum. The media and political establishment fed it in their attempts to stop Corbyn. And unless we make him prime minister, this establishment / fascist alliance will only grow.