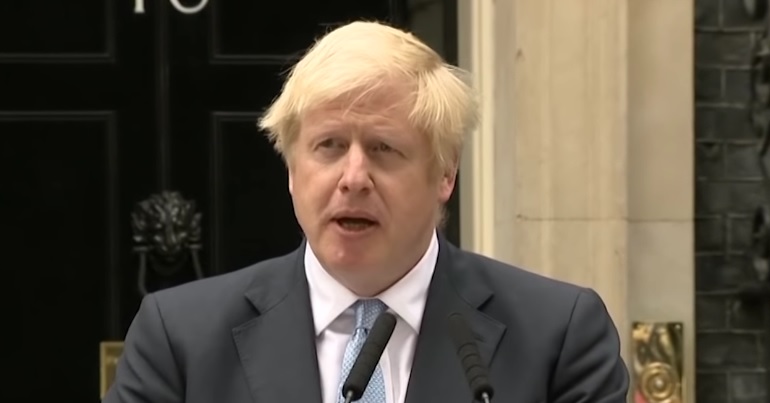 There’s a thoroughly delectable detail in Boris Johnson’s plan to fire rebel Tory MPs. The PM has threatened to deselect Conservative members of parliament who vote to block a no-deal Brexit. According to reports, the list of those who plan to vote against no-deal includes over 20 MPs:

NEW: @peston has the list of Tory rebels willing to vote to prevent No Deal. Here they are: pic.twitter.com/6DYcCCGgL7

Among them is Nicholas Soames, the grandson of Winston Churchill. So, if Johnson lives up to his threat, he’ll have to fire a close relative of the wartime prime minister who, incidentally, is one of the current PM’s heroes.

As the Sun‘s political editor pointed out, Johnson probably won’t relish the prospect of axing Soames from the party:

Sir Nicholas Soames tells me he will vote against the Govt tonight, unless the PM (who he’s going to see now) can assure him a Brexit deal will be done. Boris therefore faces the uncomfortable prospect of deselecting Winston Churchill’s grandson.

Tom Newton Dunn is undoubtedly right. Because Johnson is apparently a big admirer of the ex-PM. So much so, in fact, that he wrote a book about him called The Churchill Factor: How One Man Made History. The Telegraph described it as a “breathless romp” about Churchill. And now, excrutiatingly, Johnson has put himself in a position where he may have to boot his hero’s grandson from the Tory Party.

Soames isn’t the only party member to face the chop if Johnson isn’t all mouth and no trousers. Numerous Tory MPs are allegedly planning to support a bill in parliament that could force Johnson to extend the UK’s departure date to the end of January 2020, unless he gets parliamentary backing for a new deal or no-deal.

BREAKING: Tory rebel alliance has emerged from its showdown with PM saying he gave “an unconvincing explanation” of how a deal with the EU could pass before Oct 31st and didn’t give “a reasonable answer” to why the govt still hasn’t come up with an alternative to the backstop. pic.twitter.com/cZRbhvvVyL

The Conservative Party is in meltdown over Johnson’s plan to force Britain’s EU exit on 31 October, even without a deal. And what a delicious detail it is that the current PM may have to axe the grandson of his great Tory hero in pursuit of that. All’s fair in Brexit and war it seems with Johnson’s new government.

Featured image via YouTube – The Times and Sunday Times