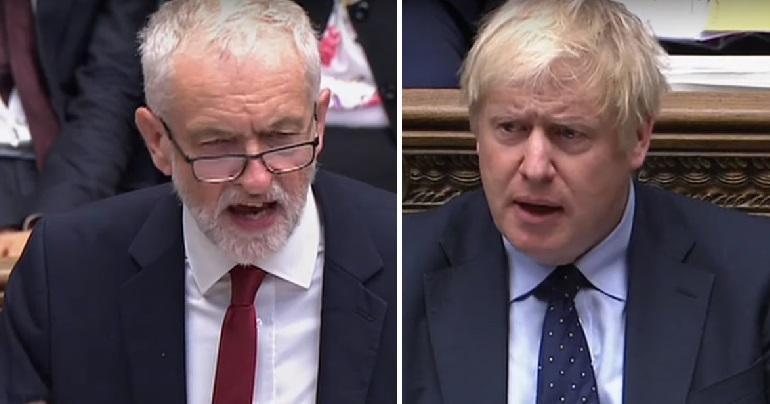 Boris Johnson’s government is rapidly going into freefall. Because as the PM was giving a statement in parliament on 3 September, MP Phillip Lee left the Conservative Party, taking away the government’s working majority in the process. Corbyn, meanwhile, ‘commanded the attention’ of the House of Commons.

The Labour leader asked Johnson’s government to “publish no-deal Brexit forecasts, so the public doesn’t have to rely on leaks”. He also slammed the PM’s “unprecedented, anti-democratic and unconstitutional” attempts to force through an exit from the EU with no deal. And he taunted Johnson’s hapless leadership, saying:

Boris Johnson's government has no mandate, no morals and, as of today, no majority. pic.twitter.com/kjbh3b1T8b

Never seen so many sad faces on the Tory benches. They look seriously worried & are unbelievably glum. @BorisJohnson is like a clown pantomime character. It’s our moral duty to remove him from power. Join us tonight to demand an end of this dangerous threat to our entire futures. pic.twitter.com/uq3hPM4uxP

And as the PM lost his majority, even the value of the pound rose:

The pound climbed to its its highs of the day after Boris Johnson lost his parliamentary majority https://t.co/w3Jfx3ktnM pic.twitter.com/fGabgstwiv

Corbyn is leading cross-party efforts to stop Johnson and his potentially devastating no-deal Brexit. And on 3 September, he stressed very simply:

Labour wants to prevent a No Deal Brexit, and to have a General Election, so we can end austerity and invest in our communities.

Today I met again with opposition parties as Labour works across Parliament to prevent a disastrous No Deal Brexit. pic.twitter.com/Qd33jAWQNU

This is a message we need to hold onto. Because while defeating Johnson is the first step, it’s not enough. We need to take Britain back from the cliff edge; and that means getting the Tories out of power. They’ve imposed unnecessary austerity policies, which centrists like the Liberal Democrats enabled. And just one of these policies – cutting public health spending – has led to over 130,000 premature deaths in the UK.

So we need a general election ASAP not just to defeat Johnson, but to elect a truly transformational Corbyn government that will end austerity and bring back hope. That’s what we need. And that’s what we deserve.