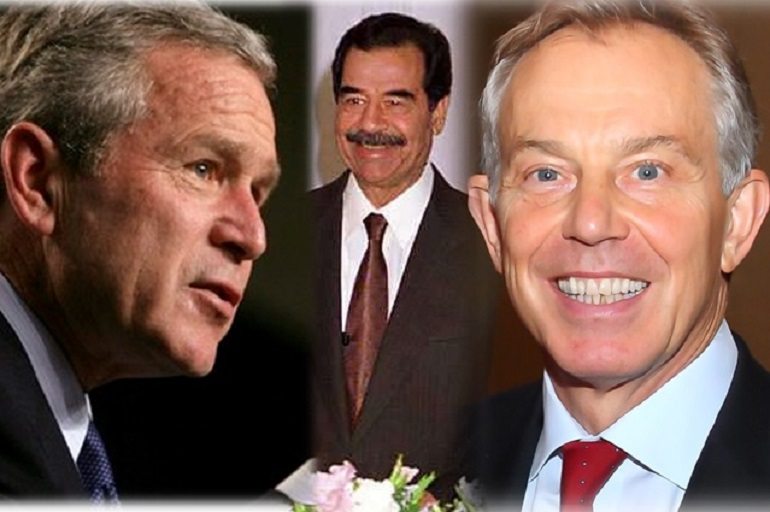 On 3 July, at least 281 people were killed and hundreds of others injured in the biggest terrorist attack of 2016 so far. But because this massacre took place in the Iraqi capital of Baghdad, it went very much under the radar of most western media outlets. With the Chilcot inquiry bringing Iraq into public discourse again this week, however, it seems completely appropriate to echo the damning judgement given by one Iraqi citizen on the 2003 US-led invasion of his country.

On 9 April 2003, champion weightlifter Kadhim al-Jabbouri took a sledgehammer to the towering bronze statue of Saddam Hussein in Firdous Square, Baghdad, just hours before US-led forces entered the city. Al-Jabbouri once fixed Hussein’s motorbikes, but after Hussein’s Ba’ath regime executed 14 of his family members, he refused to do any more work for the dictator. He soon ended up in jail as a result.

In spite of having very good reasons to celebrate the fall of Ba’athism in Iraq (along with many other Iraqis), says BBC Middle East editor Jeremy Bowen, al-Jabbouri now:

blames the invaders [i.e. the US-led coalition] for starting a chain of events that destroyed the country

Having spoken to the emblematic sledgehammer-wielding citizen, Bowen speaks of how he quickly:

realised it was not going to be liberation, but occupation. Then he hated the corruption, mismanagement and violence in the new Iraq. Most of all he despises Iraq’s new leaders… He longs for the certainties and stability of Saddam’s time.

Saddam has gone, and we have one thousand Saddams now… It wasn’t like this under Saddam… We didn’t like him, but he was better than those people… Saddam never executed people without a reason… There was no corruption or looting… You could be safe.

Saddam Hussein was not afraid to use force to keep himself in power, and led Iraq into disastrously destructive wars against both Iran and Kuwait. But since the 2003 invasion of Iraq, the country has seen potentially a million civilians murdered in the midst of sectarian conflicts which quickly spiralled out of control in the power vacuum following Hussein’s defeat. It is more than fair to say that the country has seen few days of peace in the last 13 years.

When asked what he’d do if he met Tony Blair, al-Jabbouri said:

I would say to him ‘you are a criminal’, and I’d spit in his face

And to Blair, George W. Bush, and the whole US-led coalition, he would say:

A reviled dictator may have been overthrown back in 2003. But invading western forces also dissolved the Iraqi army and state without a real plan for rebuilding the country, past privatising state resources and securing the passage of oil out of Iraq. As Bowen insists, the US-led military coalition simply:

improvised – and made matters worse.

Before the invasion, he says, “jihadists were not in Iraq” and “Shia and Sunni Muslims, whose sectarian civil war started during the occupation, could co-exist”. After the Iraqi army had been dismantled, however, the insufficient western troops found it impossible to stop the growing resistance as ideologically-fuelled foreign fighters “poured across open borders” to make the most of local anger.

Now, just days after Iraq’s deadliest single terrorist attack in almost a decade added hundreds of names to the toll of hundreds who had already been murdered in 2016, the horrific legacy of the invasion of Iraq is more visible than ever:

In the words of our weightlifting friend Kadhim al-Jabbouri, the 2003 invasion of Iraq may have overthrown Saddam Hussein, but it also spawned a “thousand Saddams”. So whatever western investigations into the invasion reveal, Iraqis and citizens throughout the Middle East know exactly where the blame lies for the region’s current instability. And out of respect for the millions of civilians who have had their lives cut horrifically short in recent years as a result, the war criminals responsible for sowing the seeds of so much death and destruction must be brought to justice.