Tony Blair is innocent. Says no one except Tony Blair (VIDEO) - Canary 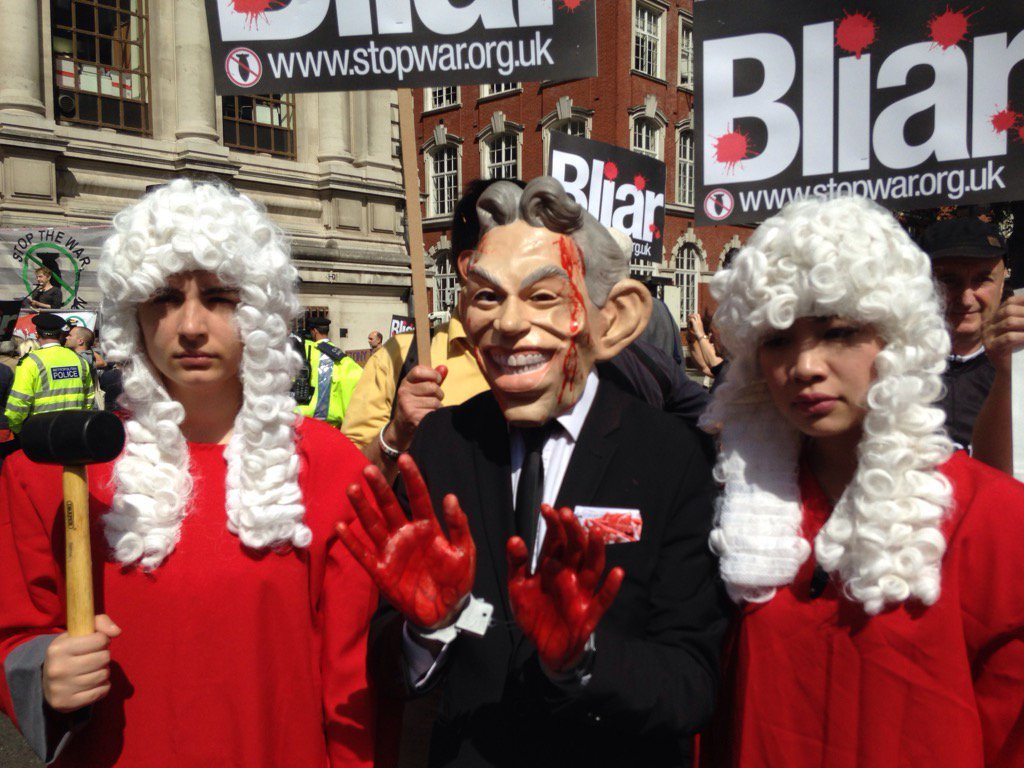 In what can only be described as an utterly flabbergasting statement following the initial release of the Chilcot report, Tony Blair appears to have found himself innocent.

But only he seems to think so.

Releasing his reaction immediately after the publication of the inquiry into the 2003 invasion of Iraq, the former prime minister was hardly remorseful in his words. On the contrary, he actually appeared somewhat “pleased” with the outcome.

The report should lay to rest allegations of bad faith, lies or deceit. Whether people agree or disagree with my decision to take military action against Saddam Hussein; I took it in good faith and in what I believed to be the best interests of the country.

He continued, by citing the “positives” that had been found from the Chilcot Inquiry:

He does, however, concede that he may have made various grave errors of judgement, noting that:

the report does make real and material criticisms of preparation, planning, process and of the relationship with the United States. These are serious criticisms and they require serious answers […] I will take full responsibility for any mistakes without exception or excuse.

His statement prompted a furious backlash from many quarters, not least from families of the 179 servicemen and women who lost their lives during the war. Sarah O’Connor, whose brother was killed in Iraq had the following, devastating statement to make:

Roger Bacon, whose 34-year-old son Major Matthew Bacon was killed in Iraq in 2005, said that:

It has truly been an exhausting and exhaustive process […] we trust that all parties will learn their lessons. It is impossible to sum up the report accurately. We’ve had 180 minutes – a minute for each death, to digest a 7-year project. After sufficient time for a proper analysis of Chilcot’s report, we reserve the right, ourselves, to call specific parties to answer for their actions in the courts, if such a process is found to be viable.

Civil cases against the decision makers involved in the Iraq war may well be possible. On Tuesday, General Sir Michael Rose, who has been advising the families, said action might be taken for what he called “malfeasance in a public office”. As the government’s own legal reform website states:

It may be committed when a public officer, acting as such, wilfully misconducts himself to such a degree as to amount to an abuse of the public’s trust in him and does so without reasonable excuse or justification.

As Joshua Rozenberg writes starkly in the Guardian:

Whether or not the courts would be willing to entertain a prosecution of a former prime minister for what may be seen as political failings, we can be sure that actions such as these were not in the minds of the judges when they developed the crime of misconduct in public office.

The prosecution of a former British prime minister would be without precedent, and only time will tell as to whether this will come to fruition.

The Stop the War Coalition also issued a damning verdict on the initial findings of the Chilcot report, specifically targeting Blair. They said that:

The Chilcot report is a damning indictment of Tony Blair and those around him in taking us to war in Iraq. It is clear that he used lies and deception to get his way, that the war was unnecessary and illegal and that everything was done to ensure it went ahead. The anti-war movement and the millions who marched were vindicated by this report and we now demand justice.

In a later statement, Blair admitted that “the intelligence was wrong. I express more sorrow, regret and apology than you may ever know”. He repeatedly hammered home the following points at a press conference:

Please stop saying I was lying, or I had some dishonest or underhand motives […] I will never agree that those who died or were injured made their sacrifice in vain […] I believe I made the right decision and the world is better without Saddam Hussein.

His somewhat hollow words, undoubtedly written by an adviser and pre-rehearsed for several hours on end, will offer little succour to the families of the 179 military personnel killed, and the hundreds of thousands of Iraqi civilians.

“It’s my belief if we learn the right lessons, the next generation will see peace in the Middle East”, said Blair.

Maybe the public should learn a valuable lesson from this whole, wholly tragic episode in history: that many politicians, however much we’d like to believe the opposite, are invariably not to be trusted.

See more of The Canary‘s coverage of the Chilcot inquiry here.